Attend a Baseball Game in Japan

The chanting of the crowd, the crack of the bat, the action being displayed on the Jumbo Tron and…edamame? The game of baseball isn’t just one of America’s favorite pastime, the Japanese are passionate about it too, but they do things a little bit different.

While traveling in Tokyo, I wanted to see a baseball game because I had heard that Japan took their baseball as serious as we do in America. Could that be?

I purchased two tickets to the Tokyo Swallows vs. Baystars game through japanball.com, while still in the United States. And though they charged a hefty sixty dollar fee for hotel delivery, at the time, it was worth the comfort of knowing that the tickets were a secure deal. I didn’t want to take the chance of missing this bucket list opportunity.

Though, as they say, hindsight is twenty-twenty.

We could have easily purchased the tickets for this particular baseball game at the stadium, saving the sixty bucks, because the Swallows aren’t as popular as the Japan’s beloved  Yomiuri Giants, which easily sell out months in advance. Oh well.

You can also easily purchase baseball tickets online at Voyagin.

From the Gaiemmae subway station, we took exit #3 and just followed the crowd to Jingu Stadium. We passed many vendors along the way selling sodas, beer, edamame and even sushi. You are allowed to bring outside food into this stadium, so load up. We weren’t aware of this until after we entered. Remember that thing I said about being hindsight being twenty-twenty? On the flip side, if you do bring your own drinks, you will miss out on the opportunity to buy a beer from one of the cute beer girls. 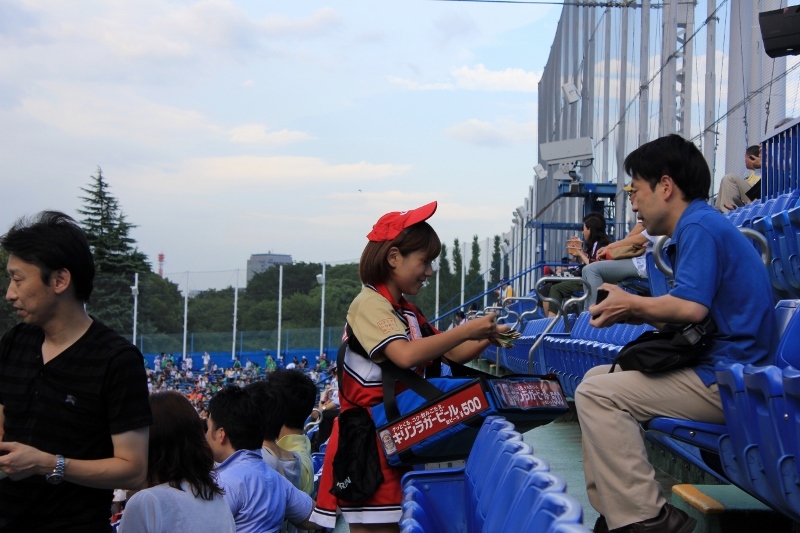 When we entered the stadium, confusion set in since my tickets were written entirely in Japanese, but all the attendants at the station were very helpful with pointing us in the right direction. 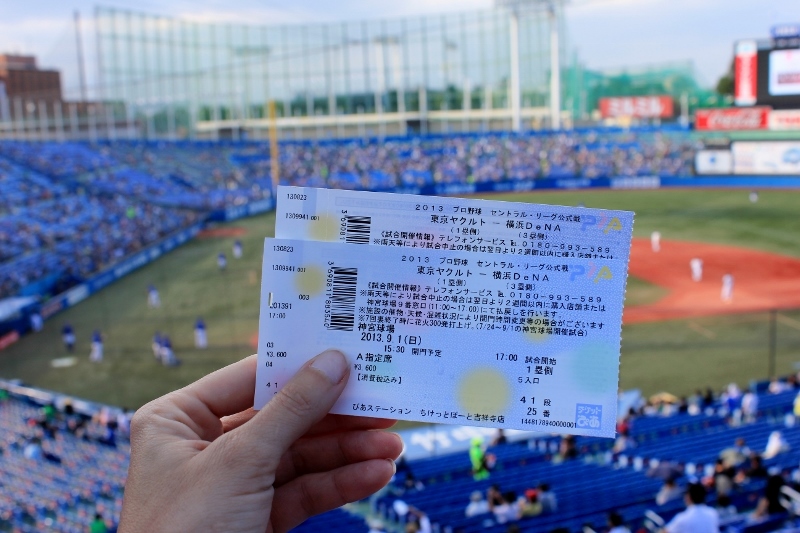 I had purchased the “better” tickets, which were considered the medium level cost, but our seats were still almost at the tippy-top of the stadium. The nosebleeds really. What was baffling, is the rows and rows of empty seats in front of me. Couldn’t they have gotten us any closer? But, we were right between home base and 1st.

Not a bad view of the action. With binoculars.

The blue seats were pretty narrow and short in length to chairs directly in front of us, especially for 6 foot 2 Peter. But, nobody sat surrounding us in a five seat radius, so all was good.

We immediately noticed how incredibly clean the outdoor stadium was, and attendants were consistently walking around with plastic bags to pick up any trash.

We arrived in time enough to see the preshow, featuring a tug if war with the kids in the crowd.

Then out came the cheerleaders. What? There are no cheerleaders in baseball. There are in Japan. Peter thought this was a great idea. 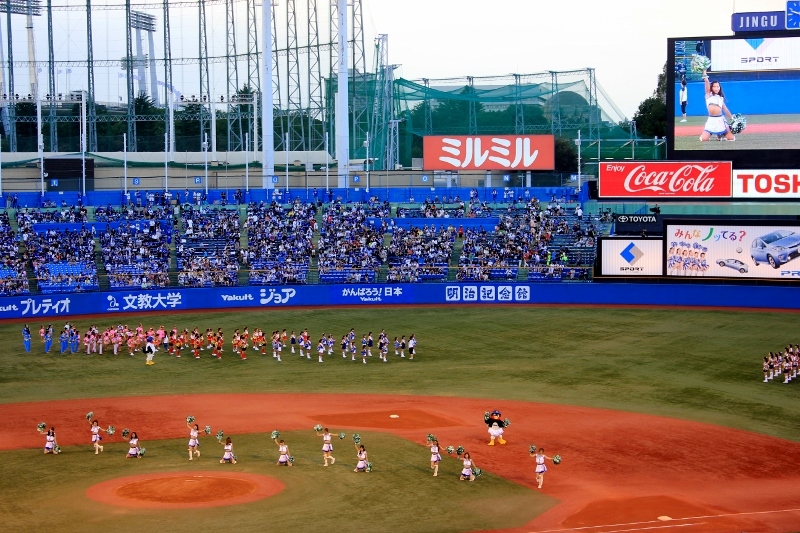 During the home team player introductions the crowd chanted and the band played. They were a lively bunch all decked out in green. The same goes for the opposing team’s crowd.

Throughout the entire game, there was chanting and singing for just about every reason; an out, a new batter up or a steal. Then came the banging together of plastic baseball bats in rhythm with the singing.

And when a player scored a run, the crowd waved tiny open umbrellas. This is fun. 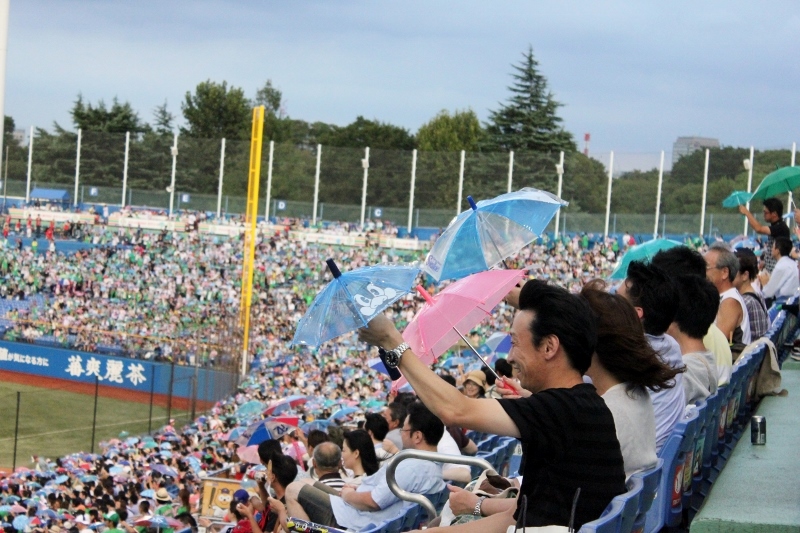 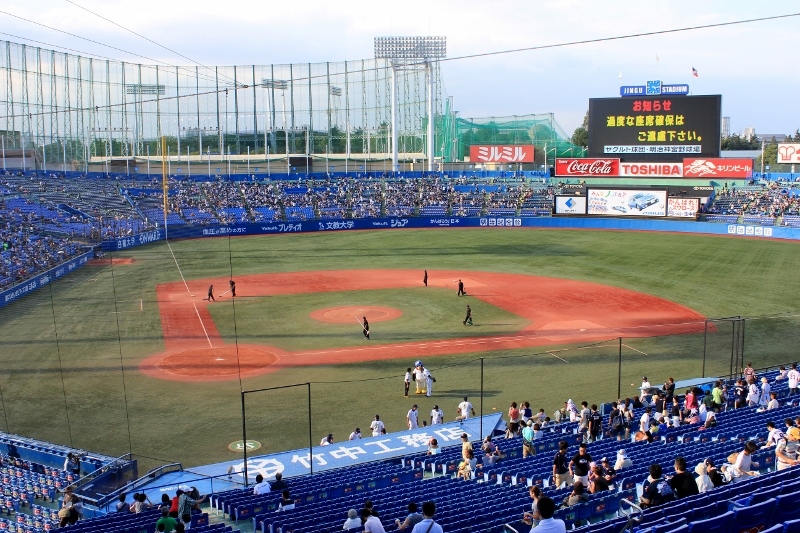 We ordered a beer from a roaming seller and settled in. The technical part of the baseball game in Japan ran pretty much the same as in America.

It’s just that instead of getting peanuts, you’ll be eating edamame. 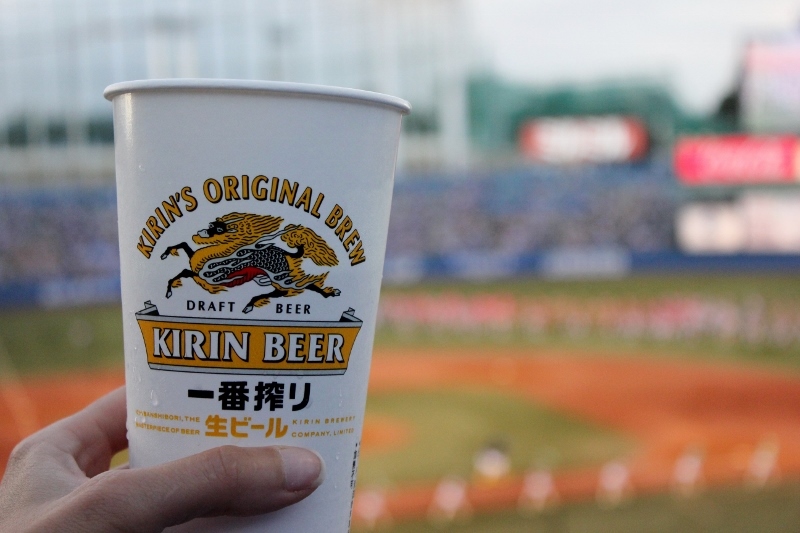 In the end the Swallows lost, but attending a baseball game in Japan was a winner to us.

Is seeing a baseball game in Japan on your bucket list?

Watch Wrestling Practice at a Sumo Stable in Japan

Eat at a Themed Restaurant in Tokyo