You can find some of the best attractions and activities in Tokyo, especially related to food and beverages. Like having dinner while playing 90s video games or while getting the quintessential ‘maid cafe’ experience. You can also do as I did on my first visit to Japan, one of the best things to do in Tokyo, and sip cocktails out of a mannequins head in a jail cell at Alcatraz ER and drink coffee at a very unusual cat cat cafe. 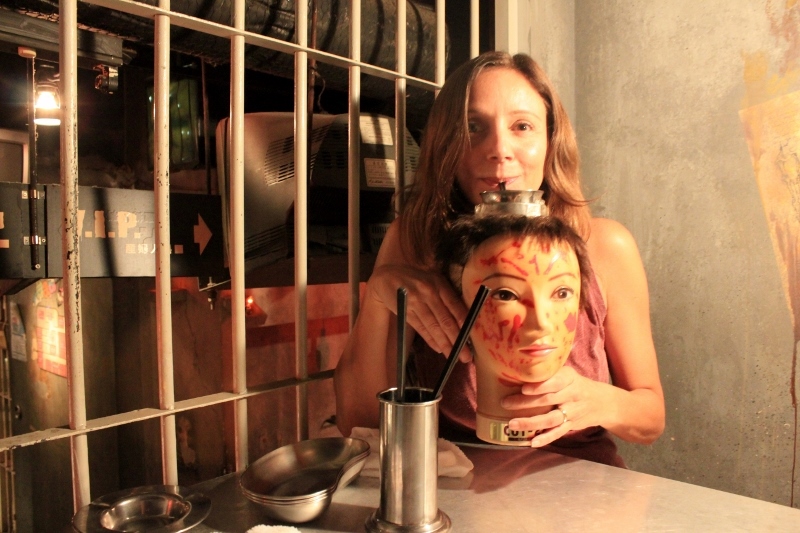 OR you can take it even one step further and choose to eat Japanese sushi from a bento box while watching scantily clad girls ride twelve foot steel horses as live stuffed animals prance around the stage at the Robot Restaurant show in the Shinjuku prefecture of Tokyo .

FYI: No one really cares about the bento box. 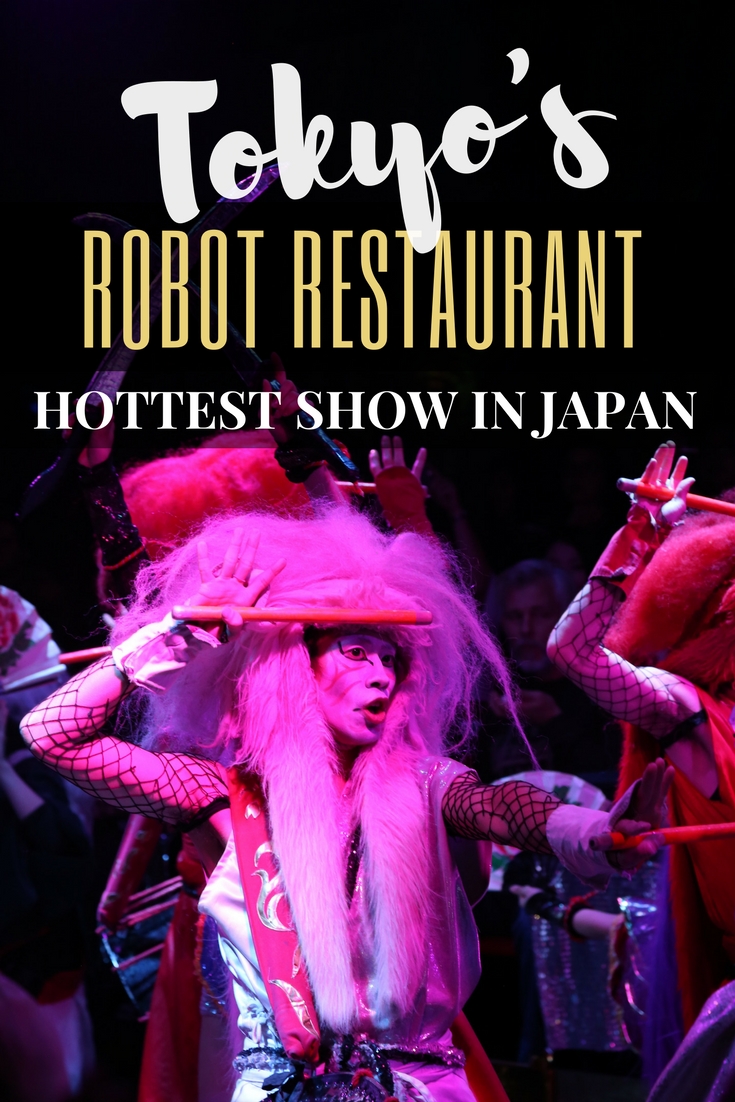 Earlier in the evening I was happily dining on crispy tempura at the legendary Shinjuku Tsunahachi So-honten, because even though the word “restaurant” in the name of that evenings robot show, it really is not one unless you consider caramel popcorn and Doritos a meal. So, it is best to eat elsewhere. After dinner, my companions wanted to make it an early evening and I wanted to spend my last night in Tokyo doing something that I would never forget, so I headed to the legendary Robot Restaurant solo. The maps app on my IPhone gave me easy and accurate directions.

It’s pretty hard to miss the Robot Restaurant in Shinjuku’s Kabukicho area, a place known as the red-light district. You walk through the streets lighted archway and enter into a different world where girly clubs mix with love hotels, dimly lit bars and eateries. Then, all of the sudden there is a rainbow of lights with music blaring in the background and a crowd of tourists standing in front in awe. You have arrived.

Even if you don’t plan on going inside for the show, you should at least walk by and sit in the robot chairs out front for a great instagram photo opportunity. 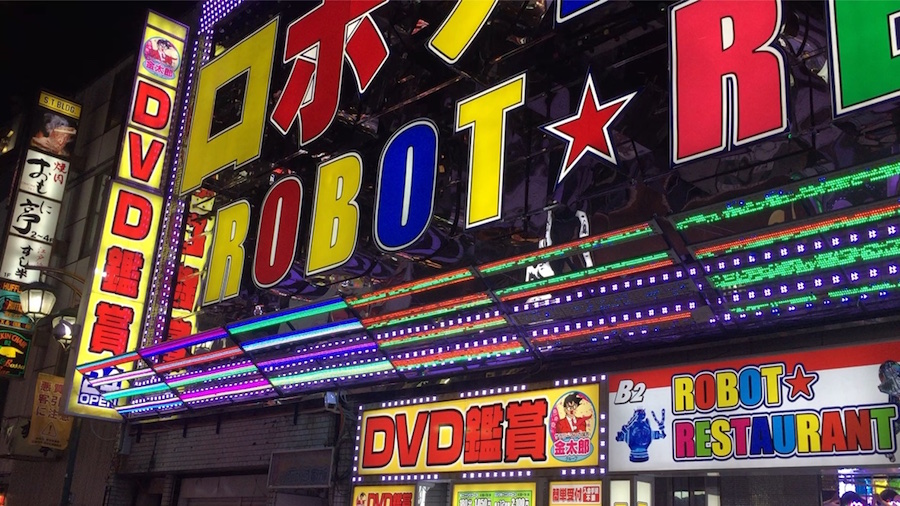 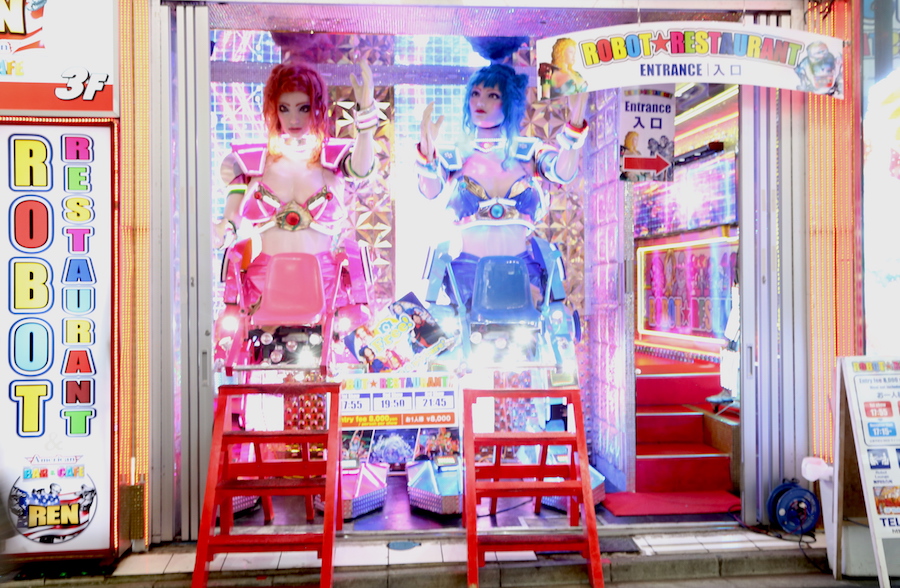 Where to Buy Tickets

I hadn’t purchased tickets for the show in advance, but they were available at the ticket office right across the way from the entrance door. As typical with many shows, at-the-door ticket prices were much higher than could be secured elsewhere, ¥8,000 ($72 USD). That’s what you get for procrastinating! Though, it was lucky that there were even tickets still available, because the small venue has very limited seating and they sell out often because it’s the best known show in Tokyo. Purchasing tickets beforehand is highly recommended!

You can find discount tickets (¥60-70,000, $54-$63 USD) if you book in advance so head over to Voyagin and book now for 38% off the ticket including a free gift! Front row seats are also bookable only with Voyagin.

You can also try asking your hotel’s concierge to book tickets for you. 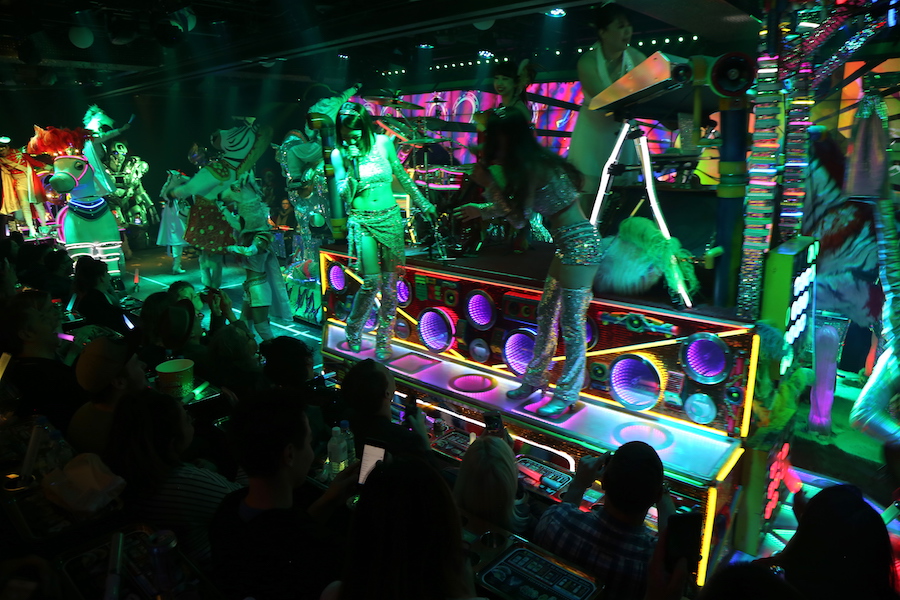 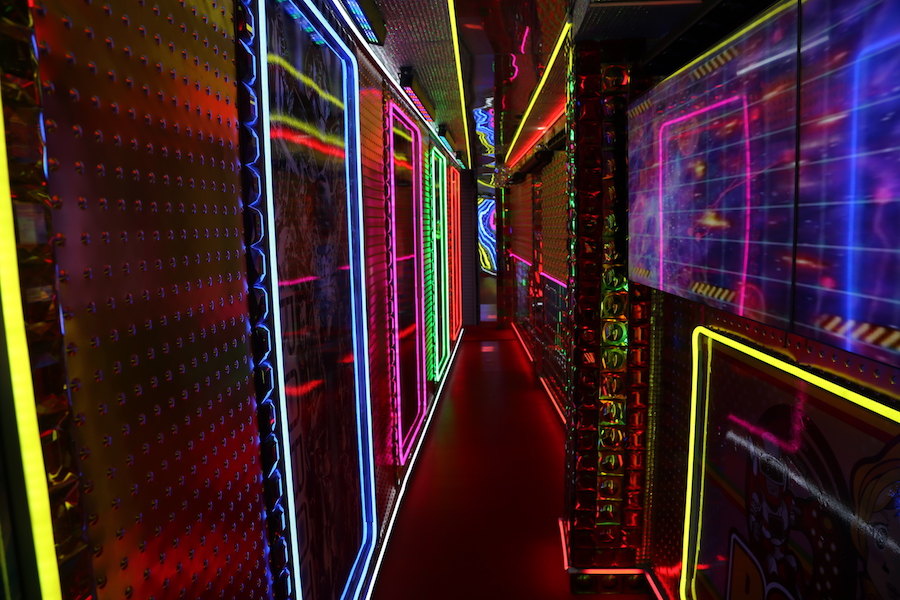 After entering from the outside, I walked down a long neon lit hallway into a room that was a mix of Liberace’s house and Las Vegas casino, times ten. A huge chunk of the ¥10 million cost to build the Robot Restaurant must be inside this room.

The bar is the holding tank.

It’s a place where you can order semi-pricey drinks (like $6 bottles of Budweiser) while you wait for entrance into the main show hall. The drink menu is posted on the wall, and quite extensive. The glitz, gold and velvet was an indication of what was to come. 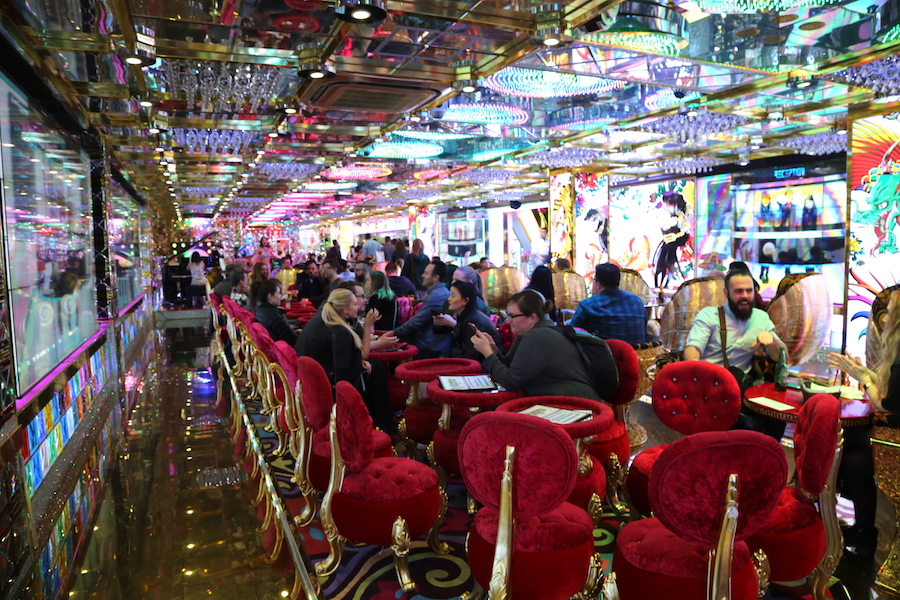 The loudspeaker announced when the show was ready for seating and like a herd of cattle we made our way down a few flights of fabulously decorated stairs to the rectangular showroom. It was a lot smaller than I thought it would be, only three rows of seats on two sides of the room.

Just about every seat is a good one.

BUT, they are crammed together. If you didn’t know your neighbor before you arrived, you will by the time you leave because you will practically be touching shoulders. Let’s hope they didn’t have garlic for dinner and decided to put on a heavy dose of deodorant that morning!

Video screens lined the back walls playing psychedelic films that I could only assume would greatly enhance the effects of some mind altering drugs. Or maybe they were meant to replicate the effects? 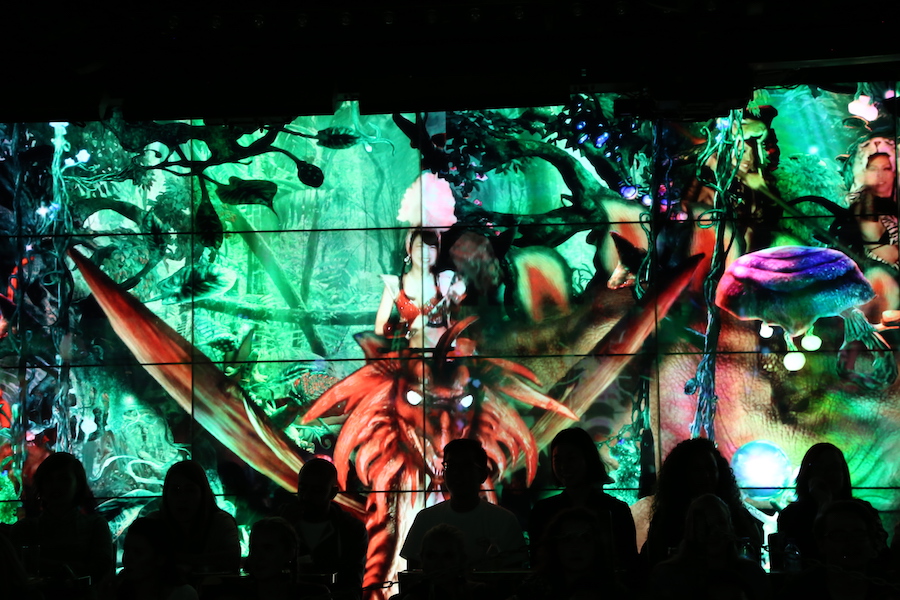 It is sensory overload. In a good way. 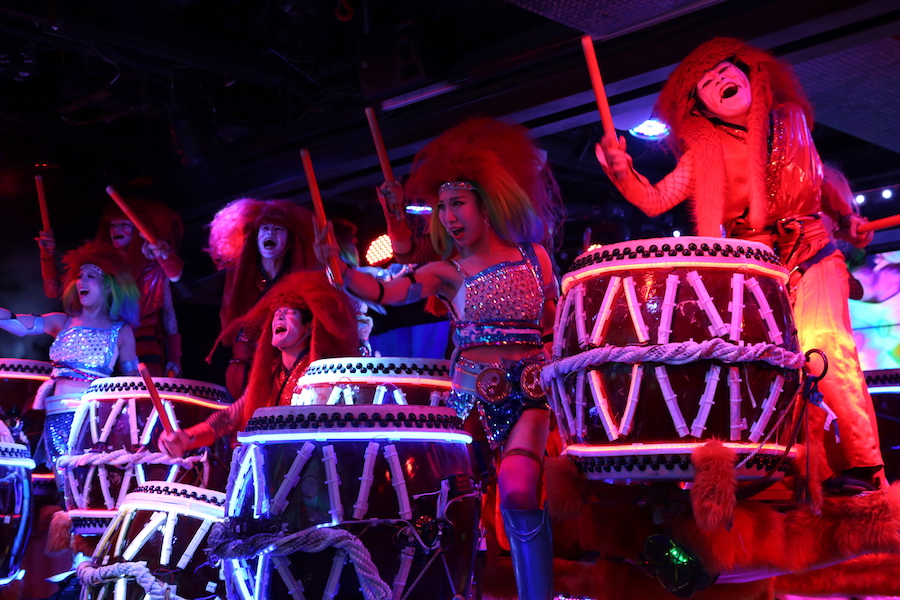 It’s like the Thunderdome movie comes to life with a little bit of Ninja Turtles and Panda Bears mixed in and they meet up with Lady Gaga. It had a little bit of everything, definitely enough to keep you entertained throughout the entire hour and a half show.

Hard to imagine? Check out my video of the Robot Restaurant Show:

About every 15-20 minutes there was a break from the pandemonium. During this time staff walked around carrying large boards (like the ring girls at a boxing match) advertising snacks and beverages for sale — popcorn, Doritos and cans of Asashi beer.

Then the chaos continued on… 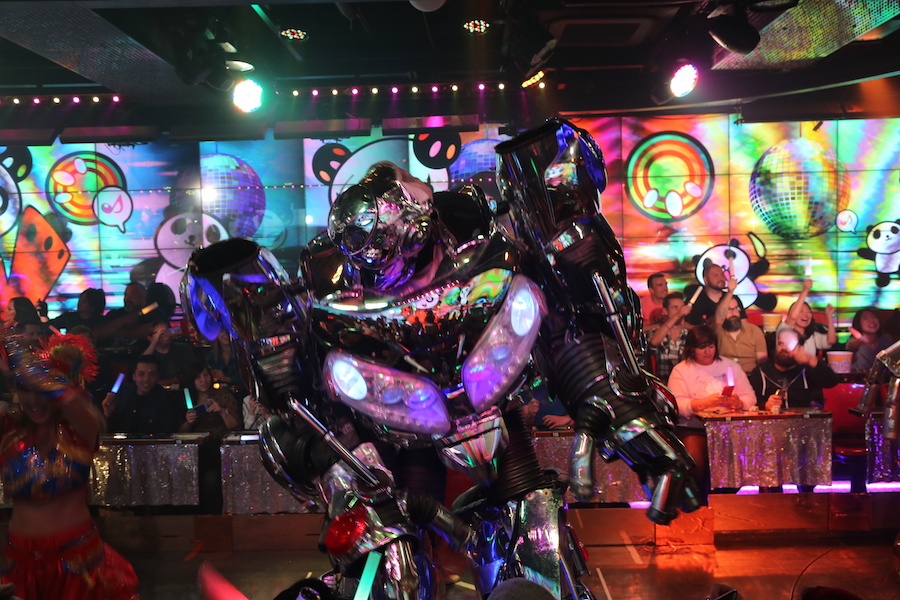 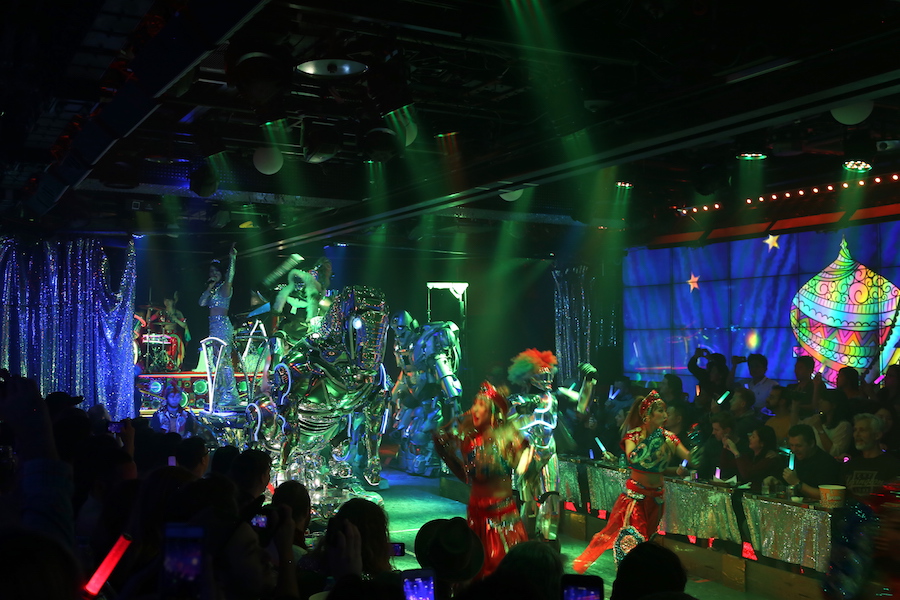 Words can not really do justice to describing the Robot Restaurant show, it has to be seen live. Only in Japan would you find something so quirky, futuristic, and baffling.

And it would be a complete success.

It is a captivating attraction that will bewilder the first-time Tokyo visitor, but if you have been to this vibrant city before it will make perfect sense in a nonsensical sort of way.

Getting There: The nearest metro station is Shinjuku, take the East exit. From there you can follow Google Maps and it should take less than 10 minutes.

Special Note: Make sure to use the restroom before entering, it is very tight quarters and squeezing to get out of your seat can be extremely difficult and somewhat annoying for your neighbors.

Powered by GetYourGuide. Become a partner.