Every country; in fact just about every city or region has a specific region that is famous for its high concentration of drinking spots. These nightlife places often attract revelers, both locals as well as tourists of all drinking ages and nationalities. The Shinjuku region of Tokyo, Japan has the Golden Gai! Golden Gai is a neighborhood in the Shinjuku ward of Tokyo that squeezes in over 200 miniature bars into a network of six narrow alleys, made only for pedestrians. And a visit is one of the best things to do in Tokyo and a quintessential Shinjuku nightlife experience.

This is a place that has been described as a drinker paradise as well as an architectural marvel. In fact, if you mention the Golden Gai to anyone who knows Tokyo well, they will immediately smile and start giving you a list of their favorite bars in the region.

I am typically a wine lounge kind of lady. Take me to a swanky place with Lorde playing in the background, cushioned couch seating and a large selection of red wine and I will be happy. Drinking in a Shinjuku Golden Gai bar in Tokyo was nothing like that, in fact it was the complete opposite.

And I liked it. In a divey-bar, fabulous sort of way. 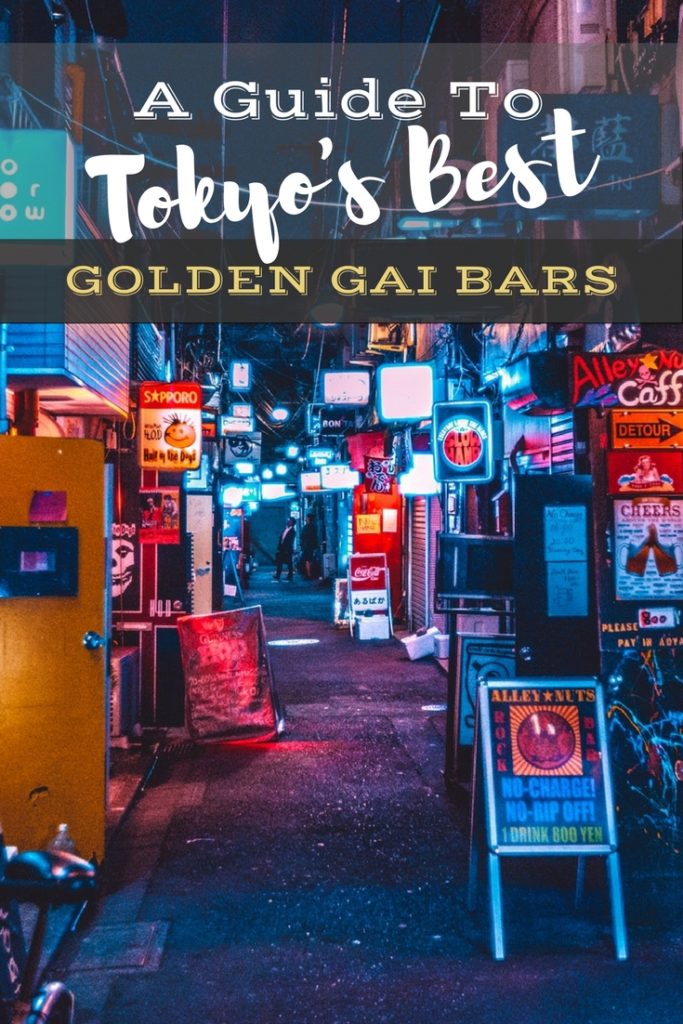 What is Golden Gai?

Simply put, the Golden Gai (Golden District) is an architectural relic from a time past. Tucked away in a small corner of what is now a gigantic center of commerce and entertainment in Tokyo known as Shinjuku, this small cluster of six alleys connected by smaller, even narrower passageways lies in the shadow of grand skyscrapers.

What makes the Golden Gai so unique is that despite the fact that it is surrounded by the glitz and glamour that is Tokyo, these six tiny alleys are dimly lit, ramshackled and has, within their shanties, over 200 tiny bars that burst into life at dusk.

The buildings in the Golden Gai are barely a few feet wide and tend to touch one another. There are also steep stairways leading to even more tiny rooms upstairs. Some of these bars are so small that they can only sit about six patrons at one go. They are, however, very well catered and tend to have regulars who go nowhere else. It’s like the entire section was forgotten by time. 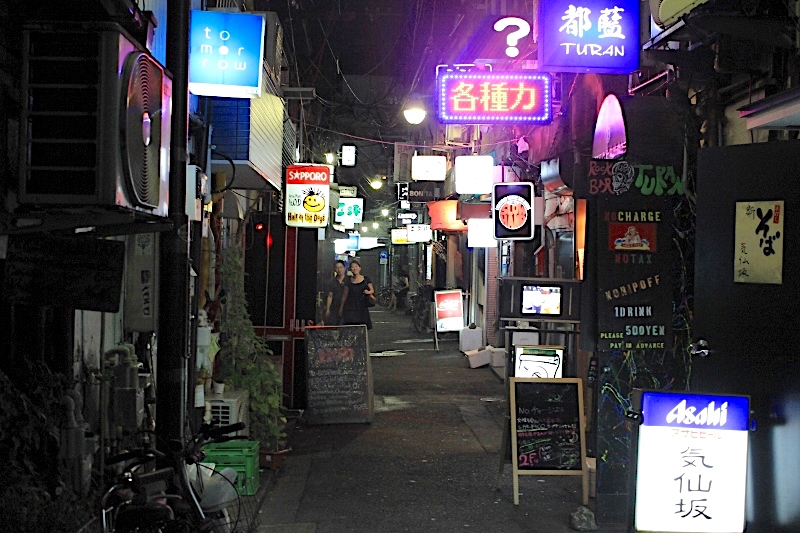 To understand just how unique the Golden Gai is, you need to understand a bit about the history of Japan’s architectural landscape. Most of the buildings were destroyed in the great earthquake of 1923. After that, came WWII with all the air raids and bombings that flattened most of Japan. Come the 1960’s Japan went through an economic boom that saw extreme modernization with most of the buildings in Tokyo being turned into concrete skyscrapers. All except the Golden Gai.

This little area (no bigger than a football field) remains as a small piece of Showa-era Tokyo that is surrounded by a highly glamorous and modern city.

In the early 1900’s, this area of Shinjuku was a haven for prostitutes and a black market. But with Japan’s economic revolution and the outlawing of prostitutions, the many bars in the Golden Gai made it possible for the neighborhood to transform itself into a nightlife tourist attraction and a drinking Mecca for thirsty locals. And so it remains today. 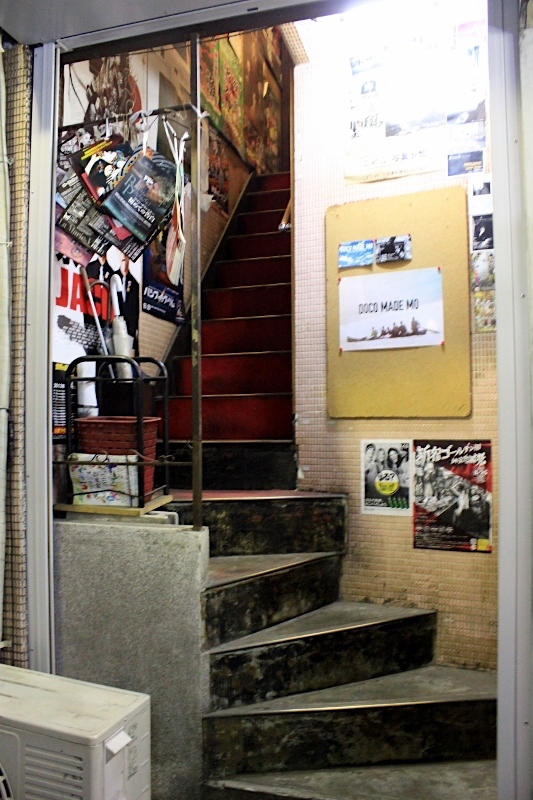 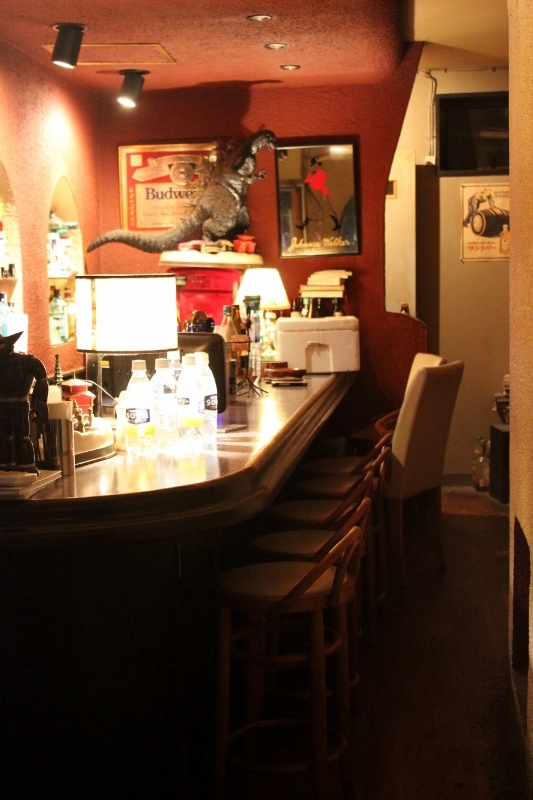 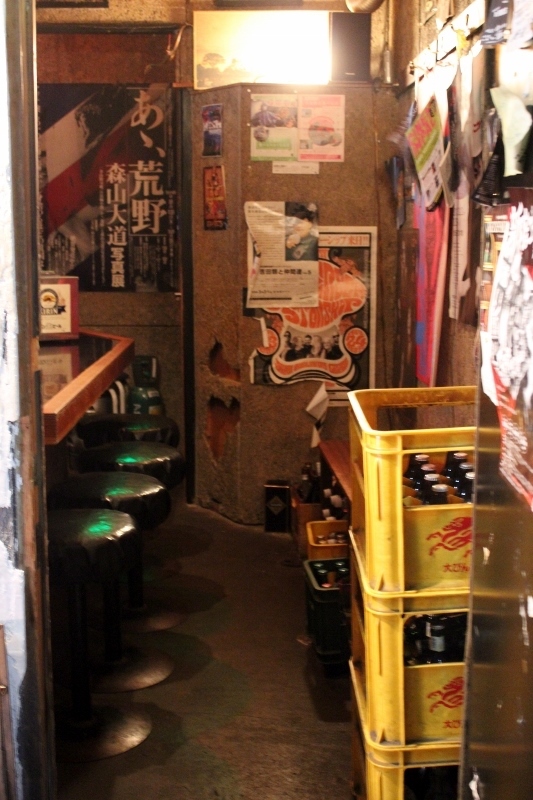 The bars at the Golden Gai are not only vibrant but they are eclectically decorated as well. Most of these bars, although generally tiny, offer a wide range of entertainment options such as karaoke, rock nights and local band performances. Many, however, are simple ‘watering holes’ that serve some of the best and cheapest drinks in Tokyo.

Because of the size of the rooms that act as bars, there are places that only serve regulars and will NOT accept new patrons especially if they are of the ‘gaijin’ (foreigner) variety. These bars are easy to spot as they are not flashy nor are they welcoming at all. That, however, shouldn’t discourage you from visiting the Golden Gai, there are hundreds of other bars that will be more than happy to serve foreigners. In fact, most of these bars cater specifically to foreigners. 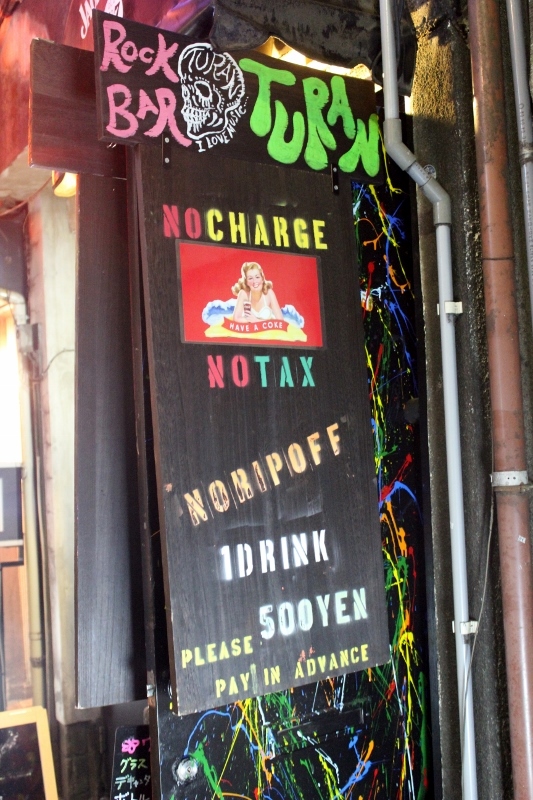 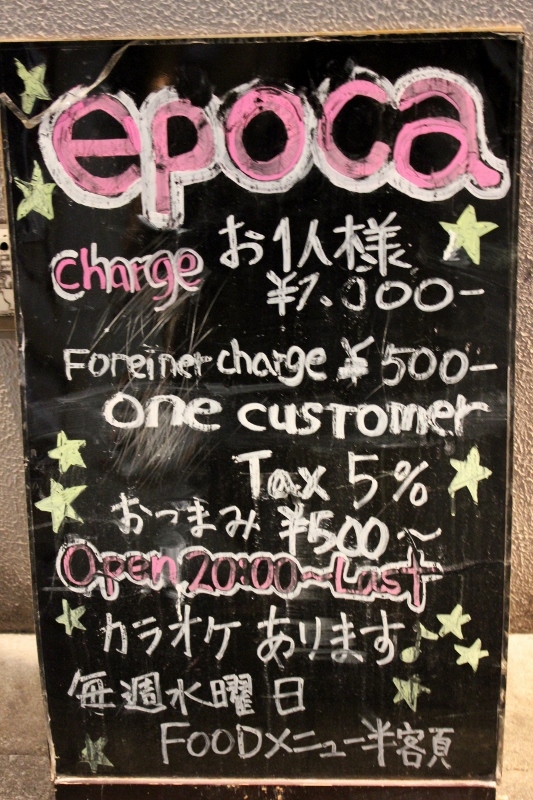 When we aimlessly wandered through the dimly lit alleyways, looking for someplace two Americans would be welcomed, it became pretty evident to where that would be. The ‘foreigners welcome’ signs, advertised ‘foreigner charge’ or more simply just by the menus written in English told us which bars to enjoy the Golden Gai nightlife in.

So, if squeezing into a six person only room that already has seven people in it isn’t your idea of a bucket list drinking experience, then you might want to visit the ‘Albatross’. This is a plush, slightly large bar that gives you a good view of the shimmering lights of Tokyo.

If you use the Yasukuni-dōri, you will stumble upon ‘Champion’, a large bar with no cover charge but has some serious karaoke action. However, if what you want is to experience the real Golden Gai, then you simply must find a small, shanty bar probably tucked away at the end of some steep staircase somewhere within the six alleys.

Zucca is just one such bar. It is tiny, eerily decorated and has very friendly staff. You could also visit:

Most of these bars are not even open before 9 p.m. But once they get going, they are the perfect places to have a good old time in Shinjuku, Japan.

We decided to do our drinking at Nessun Dorma, which means None Shall Sleep, mostly because we saw happy foreigners sharing a beer through the window and spotted a couple vacant seats at the bar.

This particular place had a 700 yen cover charge just to claim one of the limited stools. We squeezed our way to the seats, causing each of the already drinking guests to have to push in their chairs in order for us to get by. It was a tight space. 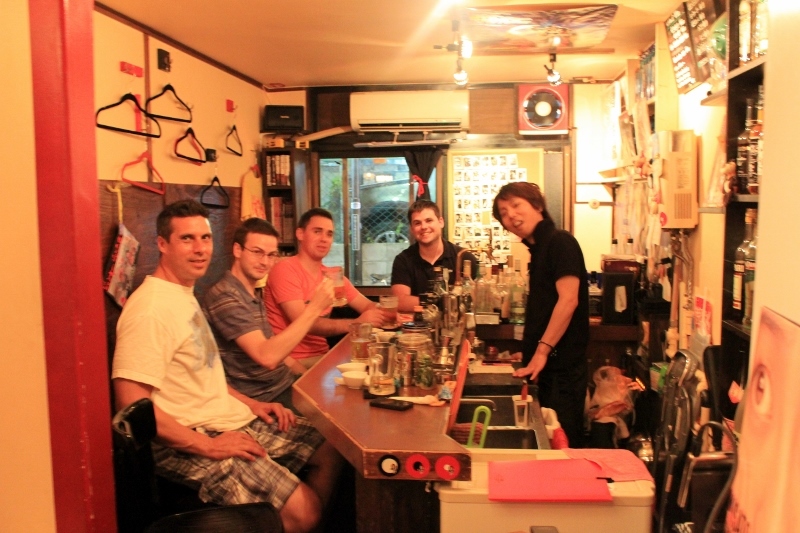 Nessun Dorma had a whopping six seats at the bar in front and eight very crowded ones in the back room. Even though they had a back bar filled with hard liquor and offered specialty cocktails with obscene names, we followed the lead of our new friends seated next to us and ordered a Japanese beer. This was Tokyo after all.

After an hour of drinking, we noticed a corkboard that had a few dozen polaroid’s of past clients at Nessun Dorma. And there was one vacant spot right in the middle. Do you see where I’m headed with this?

I absolutely wanted a polaroid of our Golden Gai drinking experience to fill this hole. And it did. 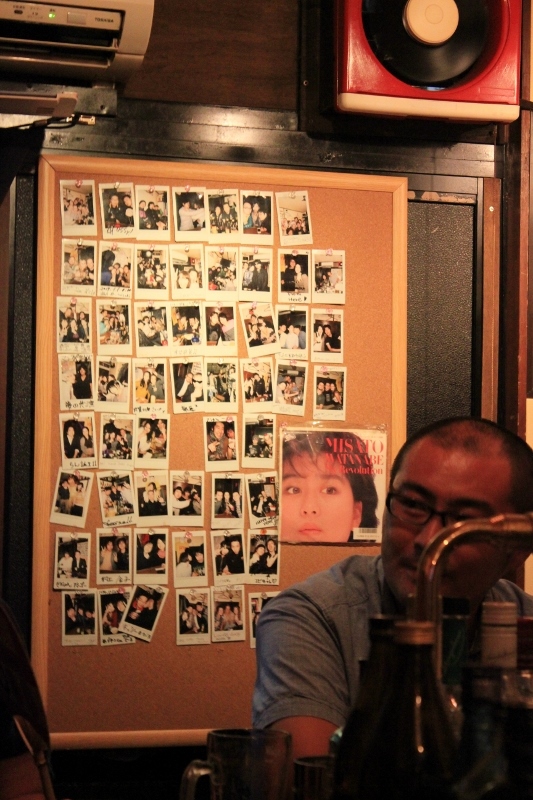 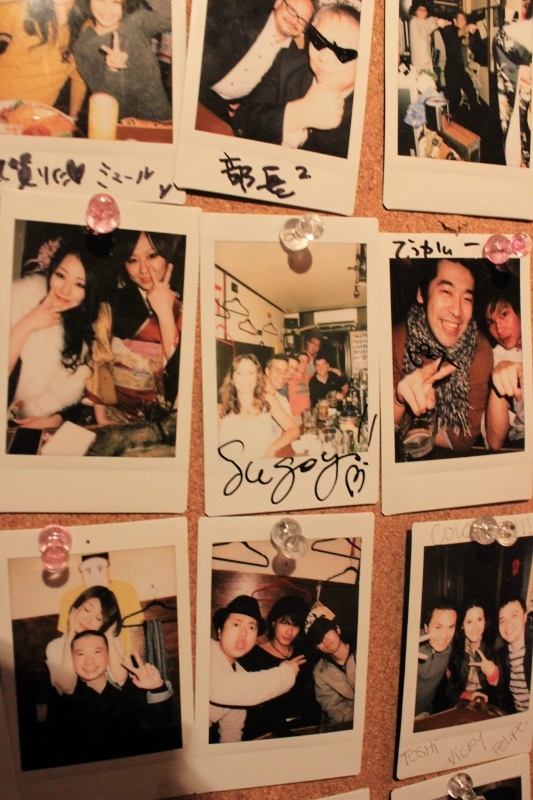 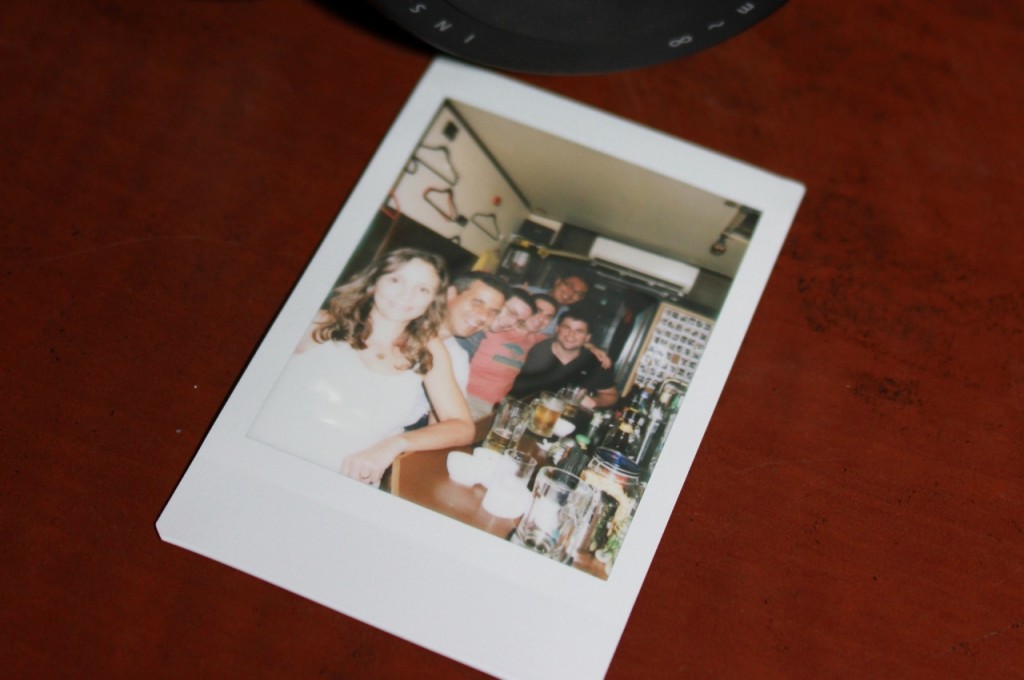 Before we left, the bartender asked, “why did you want to come to Golden Gai?”. It bewildered him and the other bar owners why this local Shinjuku nightlife spot was a one of the top things to do in Tokyo for travelers.

All the guests were on the same page in saying that we just couldn’t pass up the opportunity to have a unique experience only to be found in Tokyo. And the beer was good too.

How to Get to Golden Gai in Shinjuku & When to Go

The Shinjuku District is a special ward in Tokyo is home to a major administrative and commercial center that houses the Northern half of Shinjuku Station, by far one of the busiest railway stations in the world.

Although this region sounds very rundown and scary, it is nothing but! Tokyo is one of the safest cities in the world and I felt perfectly safe walking at night. As already mentioned, most of the ‘hip’ bars in the Golden Gai do not even open before 9p.m. So plan to go around that time unless you want to take some time sightseeing. Other than that, you can visit this region at any time of year.

When you visit, try ordering Shōchū, this is the local drink of choice for the area residents and will endear you to even the frostiest of regulars. Shouting ‘Kanpai!’ as you ‘cheers’ them will definitely graduate you to being a member!