Have you heard of a Buddhist temple with a Spiderman and Michael Jackson on its walls? No, you’re not dreaming. The White Temple in Chiang Rai (Wat Rong Khun) has something to surprise even a seasoned traveler. Traditional Thai deities? – Sure. Grotesque mythical creatures? – Of course! Unexpected satirical fusions of modern life? – You bet. Cognitive dissonance and unforgettable experience guaranteed.

The White Temple is arguably one of the most bizarre temples in Thailand, and is a vision of pure white—go figure. Located about two and a half hours north of Chiang Mai, it is an amazing fusion of traditional Thai elements and modern design and pop culture. It’s creator Chalermchai Kositpipat is one of those brave people who dare to create such thought-provoking combinations. Yes, he gets lots of criticism. But he still is true to himself and his vision. Kositpipat aims this temple to promote Buddhist practices and remind people of the importance of meditation and spiritual practice. 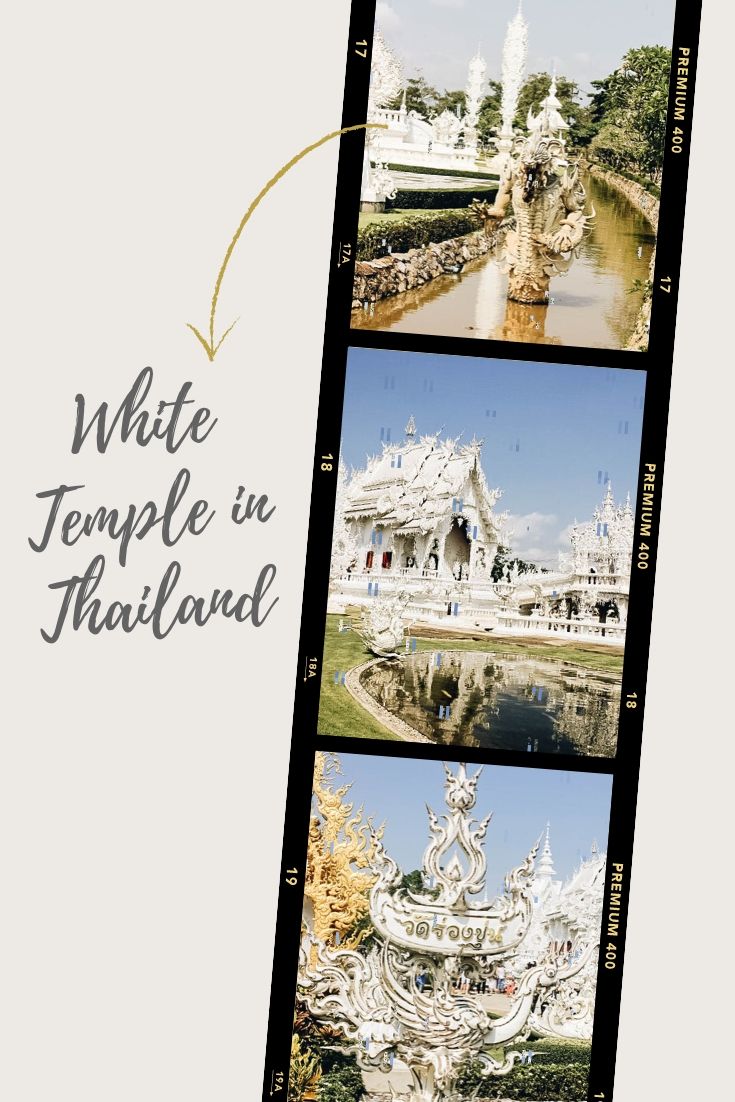 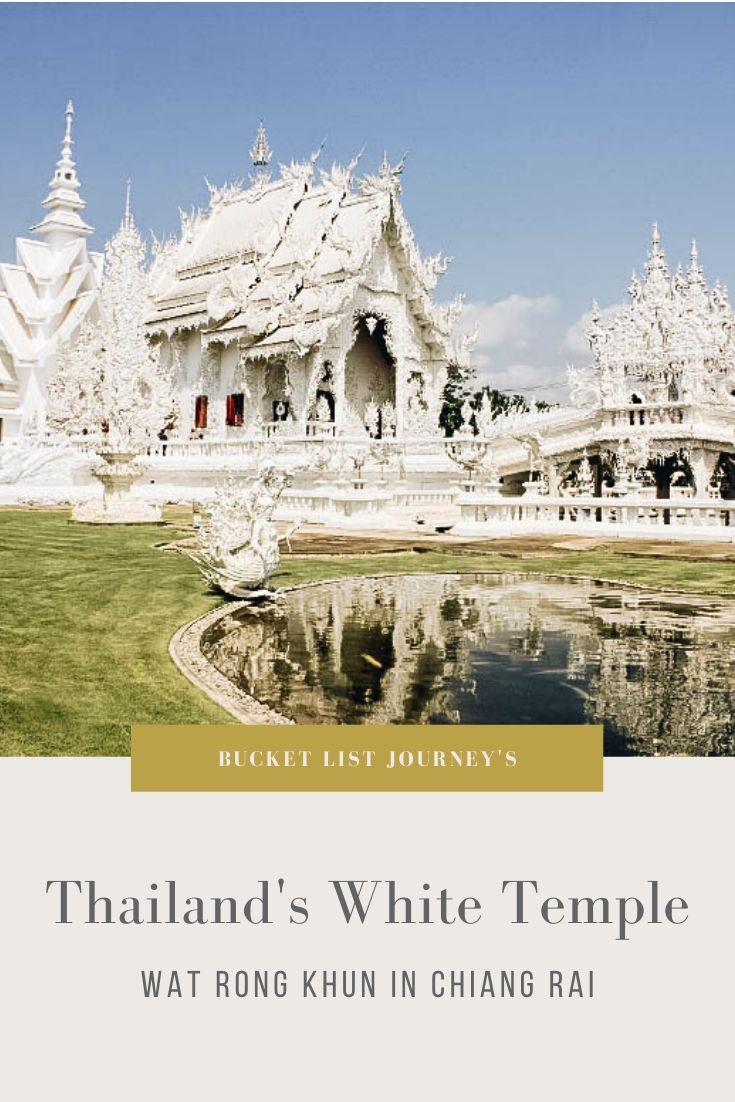 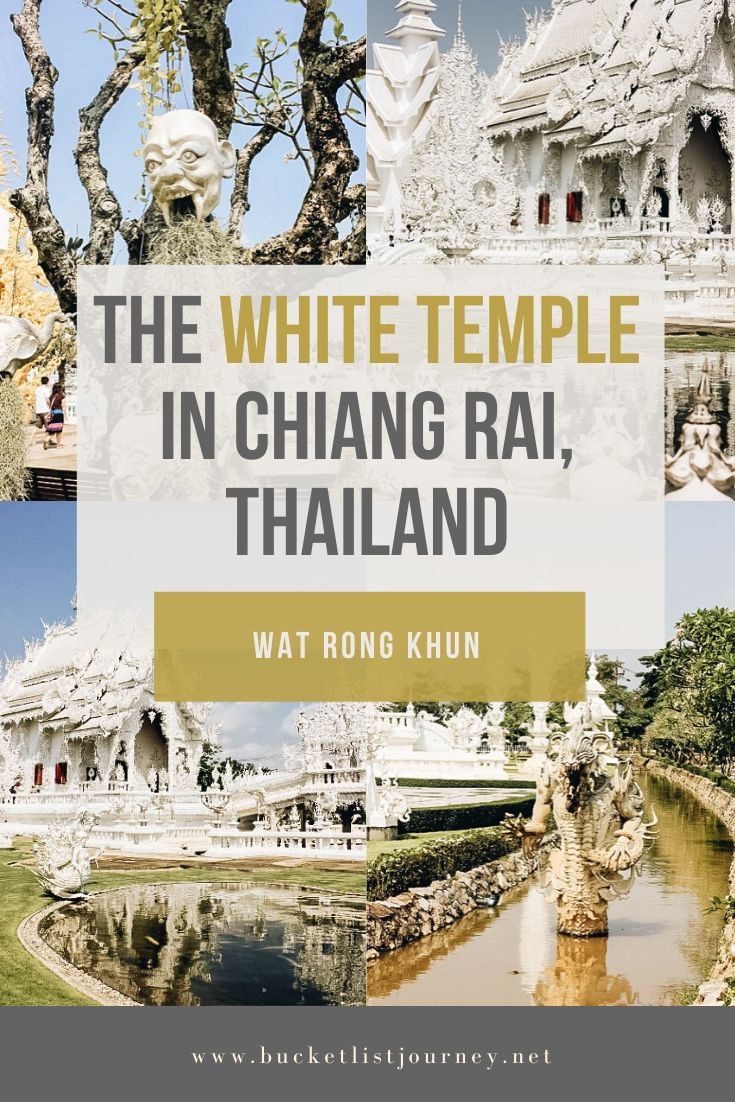 History of the White Temple

Wat Rong Khun or the White Temple is one of the most original temples in Thailand. The original version of the temple was in very poor condition, when a famous Thai visual artist, Chalermchai Kositpipat, decided to buy the temple and turn it into a masterpiece of modern art. He designed and constructed the modern version of the temple.

A team of 120 volunteer builders, architects, and artists worked together to make Kositpipat’s dream come alive. The owner paid $1.2 million to realize this project, yet the construction of the temple is not finished yet. Currently, the compound has 4 parts: a meditation hall, a hall of relics (ubosot), an art gallery, and accommodations for monks. All the 9 planned parts of the temple are going to be constructed around 2070. 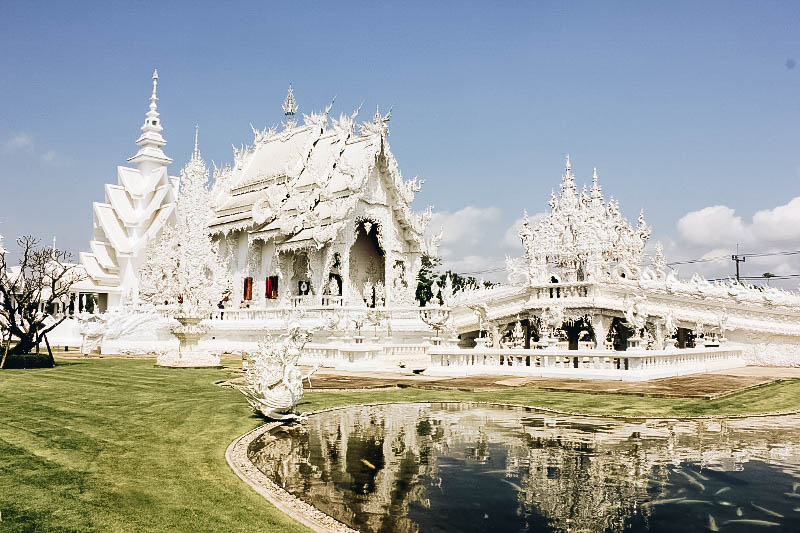 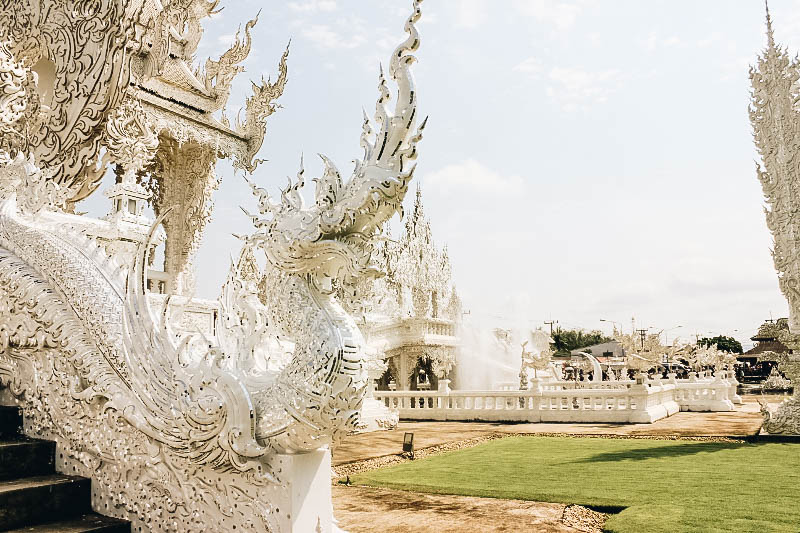 The White Temple in Chiang Rai is created in an eclectic style, combining the features and elements from different styles and epochs. The temple has elaborate ornamentation of facades and traditional Buddhist architecture. All the White Temple is covered with white plaster and small glass inserts. The sneaks of the edges and the three-tiered roof represent the traditional elements of Thai architecture.

There’s a pond at the entrance of the temple. A narrow white ornate bridge leads to the main building. The bridge is decorated with multiple religious images. Two statues of kinnaras, Thai mythical creatures, are guarding the bridge. On this bridge, you will also meet the statues symbolizing temptations, anger, and suffering. You will have to leave them behind to find your way to happiness. In addition, the entrance to the temple is guarded by two giant dragons. 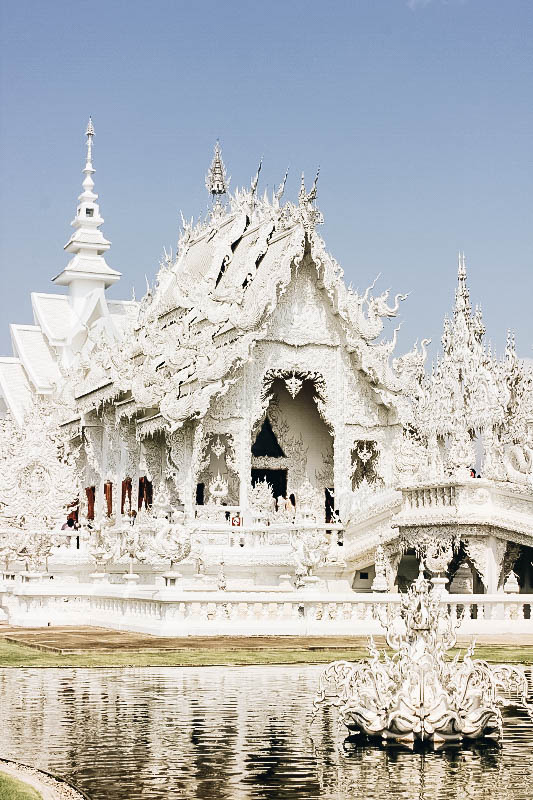 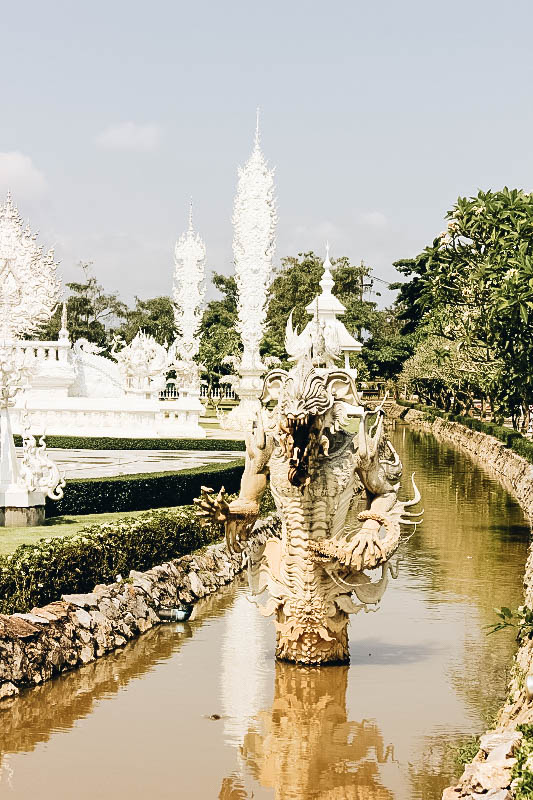 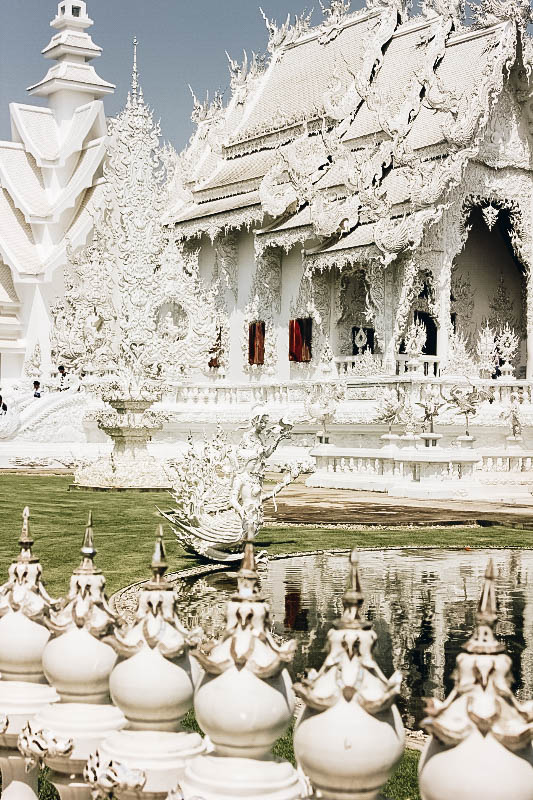 The White temple of Chiang Rai has hundreds of different detailed sculptures, which slightly resemble the creations of Gaudi or the chimeras of Notre Dame. The surrounding pools reflect the elaborate temple, which creates even more noble impression.

All the visual elements combine to create a unique surrealistic impression on the visitor. The overarching theme of this temple is escaping desire and greed and reaching enlightenment.

The art gallery features Chalermchai Kositpipat’s works. The artist uses some of his artworks to express the satirical view of the modern world and trending tendencies. He is quite an extraordinary thinker, and his art hasn’t been accepted for many years because of its modern features and bizarre perspective. 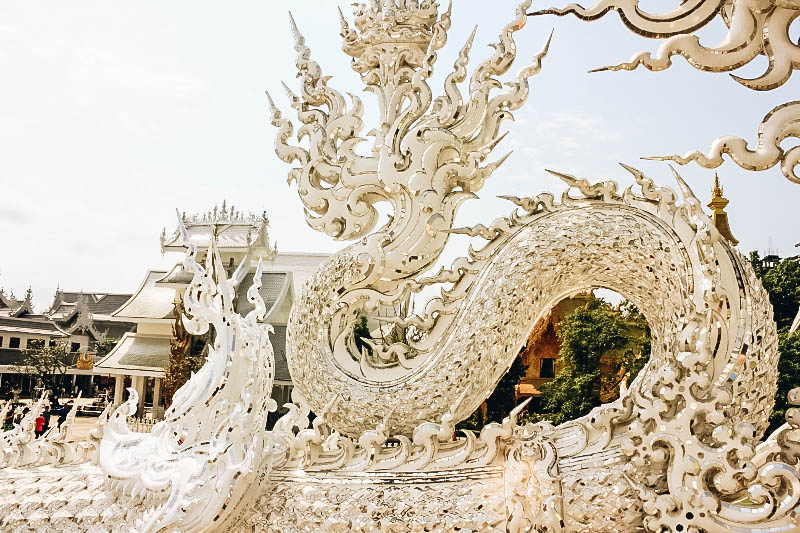 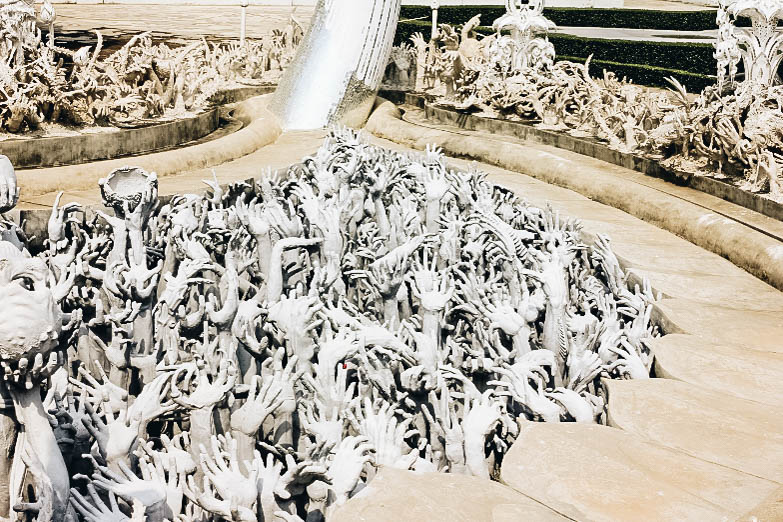 Every detail in this temple has its symbolic meaning. Most Buddhist temples are decorated with an abundance of bright colors, but this one is stunningly white. The ivory-white color symbolizes purity. If you look at the temple on a sunny day, you’ll be amazed by all the shimmering sparkles surrounding it. All the temple is decorated with elaborate plasterworks and small pieces of glass between them. The glass represents the wisdom of Buddha.

*Note: Bring your sunglasses, you’re gonna need them. Not only for the brightness of the color, but also for the reflections from the mirrored glass mosaic scattered throughout the grounds.

The exteriors of all but one of the buildings in the complex are white. The exception is the washroom. This building is of golden color. The creators used this color deliberately to express disapproval of modern obsession with money and wealth.

Amongst all the purity the creator has representations of evil too, with its eerie disembodied heads hanging from the trees and spooky hands reaching out from the ground, symbolizing Hell. 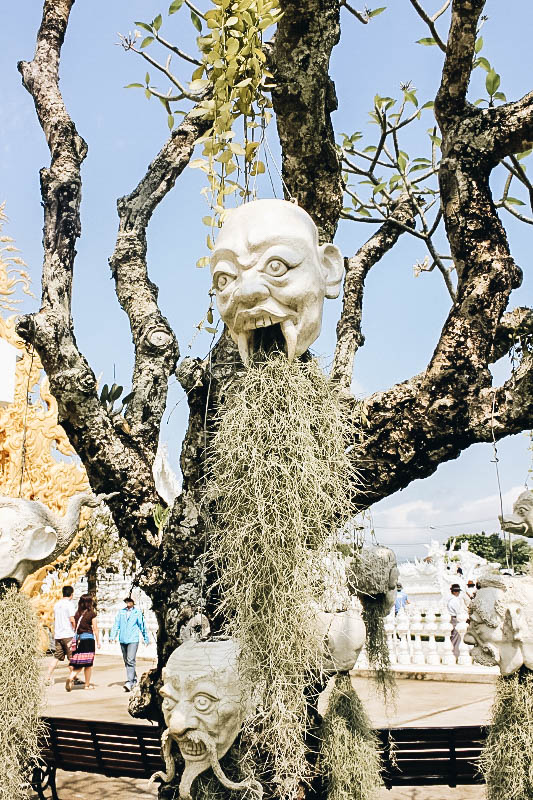 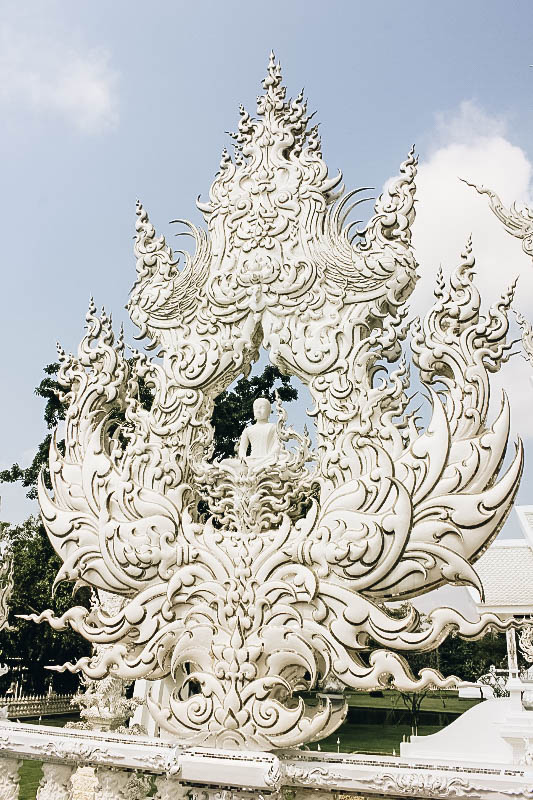 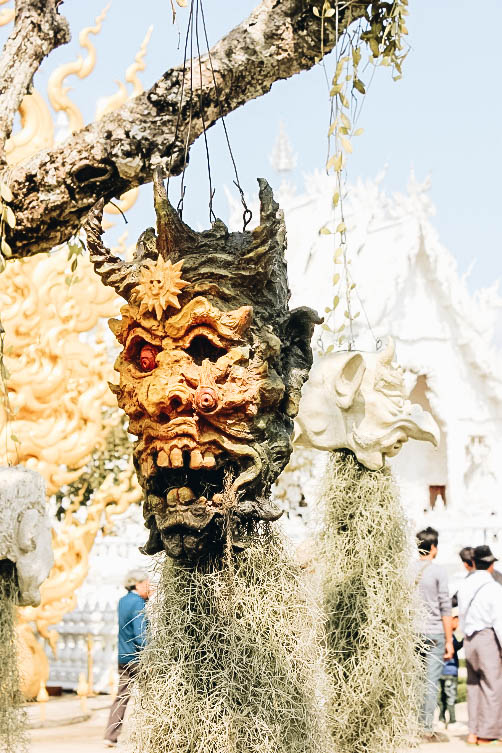 Some of the artworks in the Temple are depicting impure aspects of mundane life. There are lots of images from pop culture, like Spiderman, Michael Jackson, Hello Kitty, and many others. These images symbolize the imperfect humanity, that leads people nowhere and does not bring them real happiness. On the front wall of the main hall, there are depictions of people who escaped the earthly temptations and reached heaven.

Also, outside the temple, there is a metal statue of the Predator. This is a satire on international politics and people’s consumerist and thoughtless attitude to nature. Walking on the temple grounds you’ll get the unforgettable feeling of traveling into some surreal movie.

During my visit, just outside the temple fence were intriguing tree-like structures filled with hanging metal ornaments. Each of the thousands of tin ornaments hanging from these trees had hand written personal notes on them—A wish for the future. Even though I had just been in Hong Kong making incense wishes at a Monastery, I couldn’t resist making a wish here too. Is there really a limit on wishes? I purchased an ornament for about $2, and wrote my wish at the provided stations. It simply said: Health, Food & Travel. 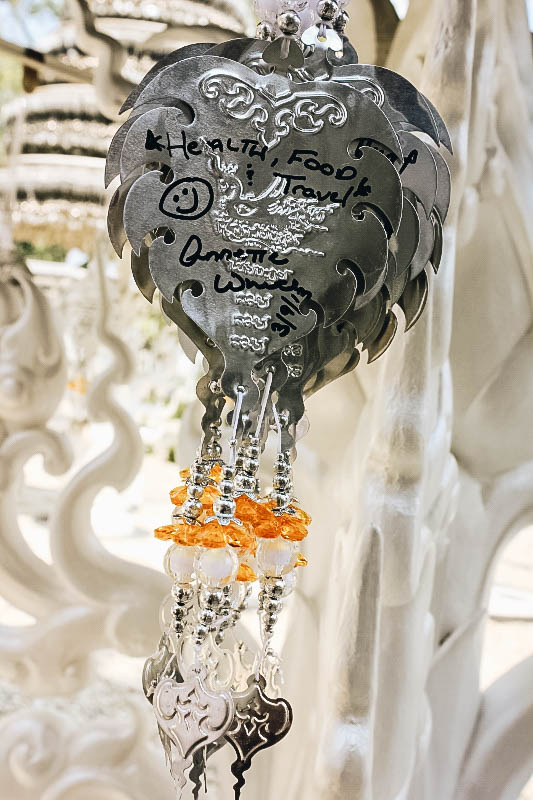 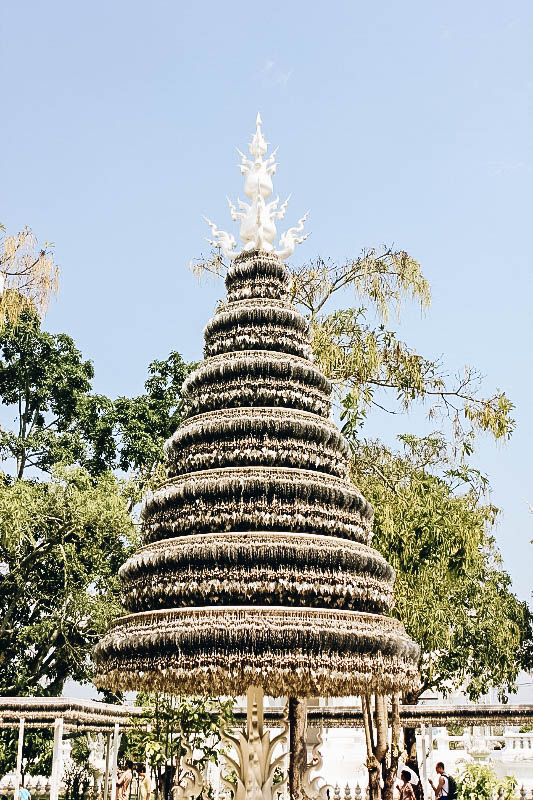 Tips for Visiting the White Temple of Chiang Rai

The White Temple is located only 13 km south of Chiang Rai, just under three hours north of Chiang Mai. There are multiple ways to get there:

Tours: Taking a tour is the easiest way to see the White Temple (especially if you are coming from Chiang Mai) and here are some of the best:

Public Buses: Public buses are available throughout the day. The route starts at Chiang Rai Bus Terminal 1. The buses go almost every hour, from 6:15 am to 5 pm. It will take you some 20 min to get there.

Taxi: Also, you can get there using a taxi and other means of transportation.

The temple is open for visitors daily from 8am to 6pm. At midday, there’s an hour-long break.

The visitors have to wear clothes covering their shoulders and knees. Also, on the entrance to the White Temple, the visitors are supposed to take off their shoes.

The White Temple in Chiang Rai tells us an incredible story. It’s very much like the modern world with traditions, technology, and new emerging tendencies tightly connected. It is a very modernistic and original way to make people pay attention to the most important things in life. The temple leaves an unforgettable impression and reminds us of the importance of paying attention to our spiritual part. So, when in Thailand, visit this one-of-a-kind place!

This post may contain affiliate links. If you make a purchase through my links, I earn a commission that helps to keep this blog running—at no extra cost to you. You can read my full disclosure here.

Chiang Mai Bucket List: 30 Things to Do in Thailand’s Best Northern City
Thailand Elephant Sanctuary: 5 of the Best Rescues in or Near Chiang Mai
Wat Chedi Luang: Explore a Temple Inside the City Walls of Chiang Mai
Traveling by Tuk Tuk in Chiang Mai & Other Transporation
Learn to Make Handicraft Umbrellas in Chiang Mai
Get a Thai Massage in Thailand
Volunteer with Elephants at a Rescue in Thailand