Bucket List of 18 Things To Do in Chiang Mai, Thailand 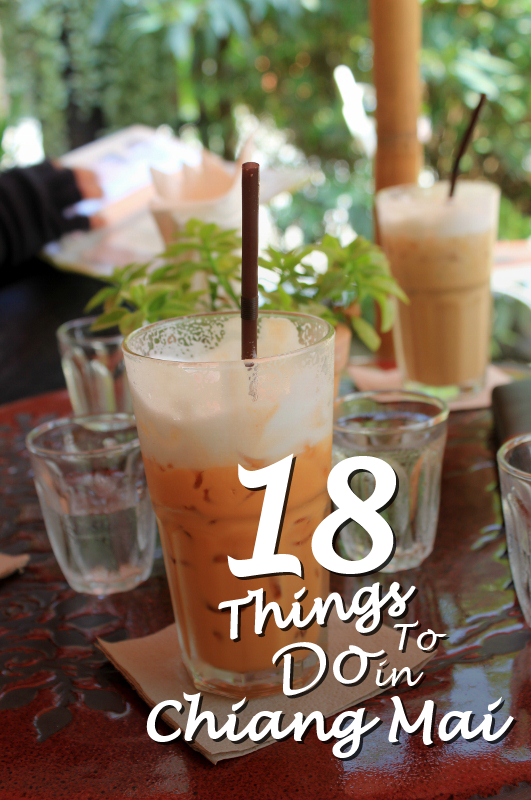 Thailand’s Northern city of Chiang Mai is many traveler’s dream destination due to its delicious food, hundreds of temples, rich culture and budget travel opportunities. It is also the second largest city in the country and filled will bucket list worthy experiences.

Bucket List of 18 Things to Do in Chiang Mai, Thailand

A century egg, also know as a thousand or hundred year old egg is an Asian tradition in which an egg is preserved for several weeks or months using a process that combines, clay, ash, salt, quicklime and rice hulls. You can typically find them in the food markets around Chiang Mai, I tried mine at Somphet market just off of Moonmuang Road. The century egg smelled like ammonia and boasted a moldy green color, though tasted like a warm, old hard-boiled egg.

Read > Eating a Preserved Century Egg at a Thai Market. 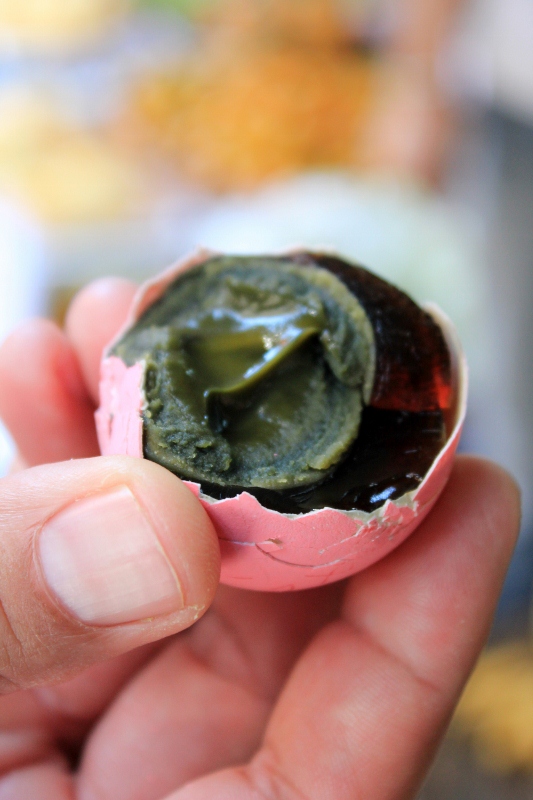 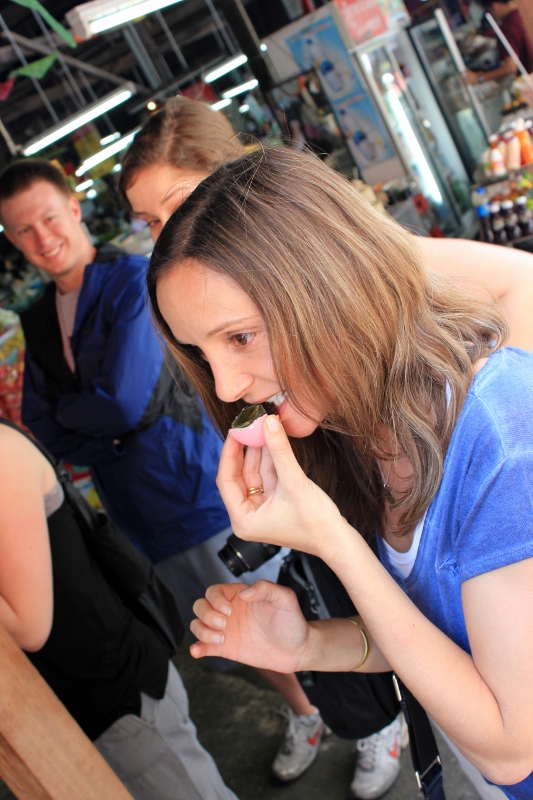 2. Get a Foot Massage by a Prison Inmate

Chiang Mai is home to the Womens Correctional Institution where they have set up a massage rehabilitation program in order to help the inmates easily integrate into society. There was an hour wait when I went to get my foot massage, but they have a little café with tasty beverages and an outdoor patio to enjoy while you wait.

Read > Get a Foot Massage by an Inmate in Chiang Mai 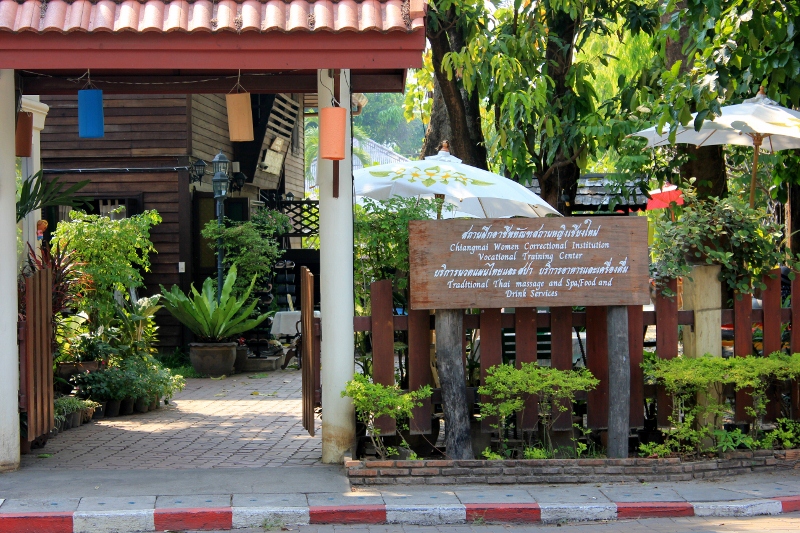 From Pad Thai to Red Curry to Som Tum, the foods in Thailand are worth learning how to duplicate on your own. With dozens of cooking schools in Chiang Mai to choose from, we selected the Thai Orchid Cookery because it was just a couple doors down from our hotel, the 3 Sis, and it had rave reviews on Tripadvisor. We weren’t disappointed. 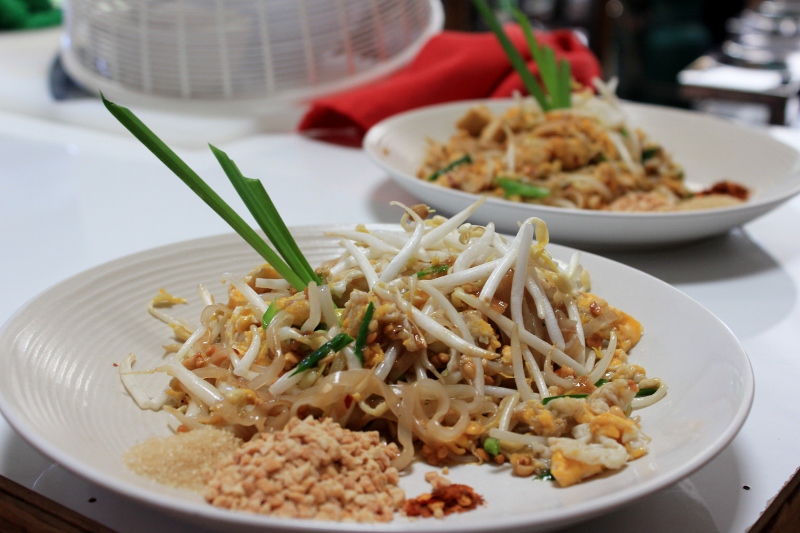 There are a few modes of transportation throughout Chiang Mai, but none more well known that the tuk tuk. A tuk tuk is a 3-wheeled motorized vehicle that you will see zipping all around the towns of Thailand and a one of the most popular things to do. The fares typically run from 60 – 100 baht, but make sure to confirm this price before hopping on! 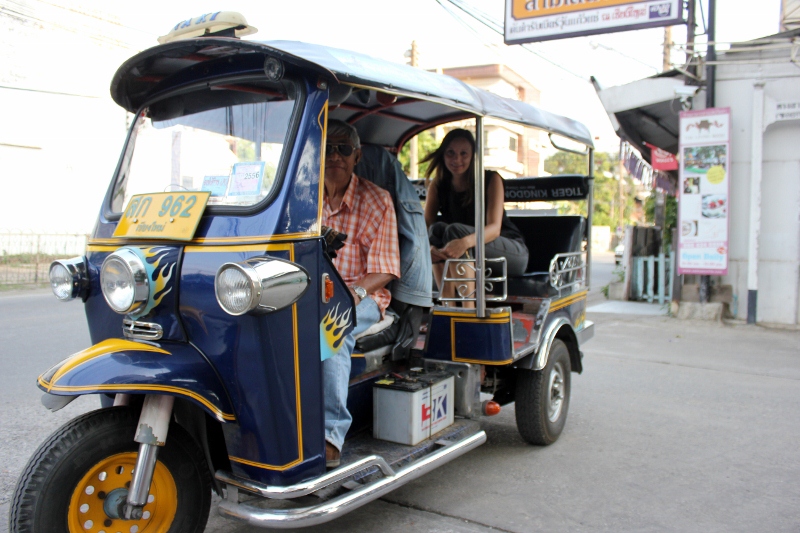 While exploring the amazing wats of Chiang Mai, there is an opportunity for a very unique experience. A few of the temples in the city have a “Monk Chat” program where curious visitors are able to speak to the monks about almost any aspect of life. This is the perfect opportunity to get insight into their lifestyle and beliefs.

A popular place to do these chats is at Wat Chedi Luang. 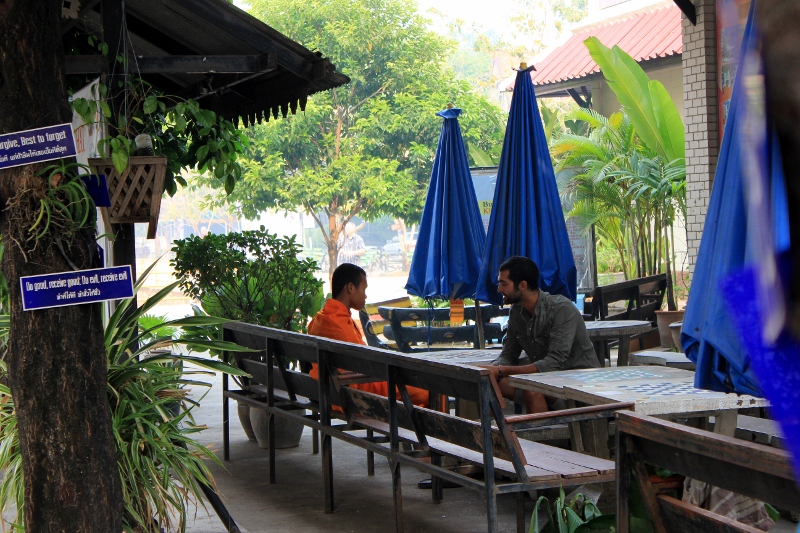 Though not on the dinner table in a typical Thai home, eating insects was on my bucket list and you can definitely do it in Chiang Mai. At the famous Sunday night market, I found an entire booth dedicated to edible bugs. All sorts of varieties were there; crickets, cicada, mealworms and whirligig beetles. How will you choose? 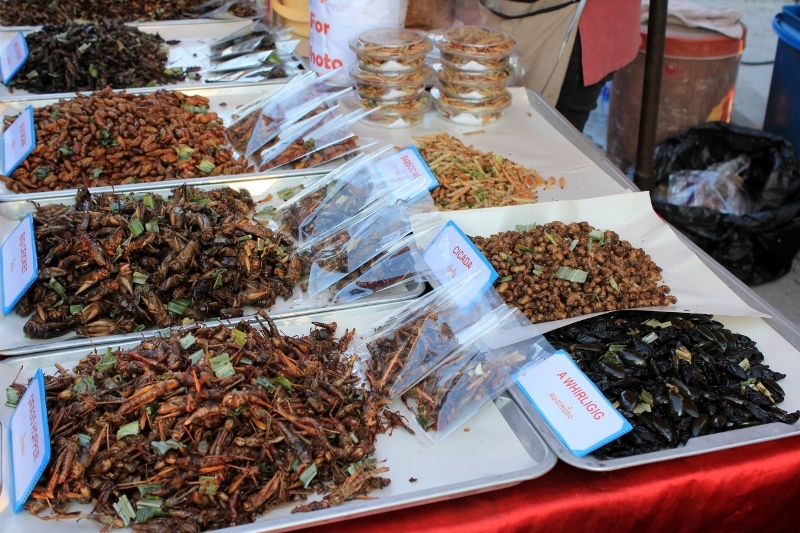 Muay Thai (Thai Boxing) is known as the national sport, is one of the hardest of the martial arts and is one of the most popular things to do in Chiang Mai. As you walk through the city center at night you will encounter people on the streets handing out flyers and yelling “Thai boxing tonight”. 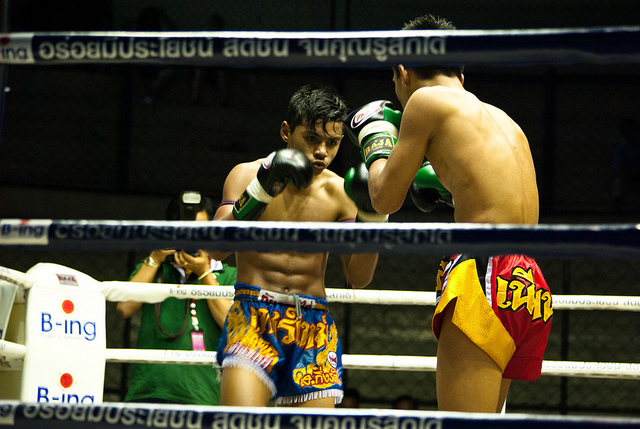 Also known as Cha Yen, a Thai iced tea is one of the most refreshing drinks in the city. This strongly brewed Ceylon tea is sweetened and then topped with condensed milk (or half and half). You won’t have to look far to find one, they can be ordered at almost any restaurant in Chiang Mai. 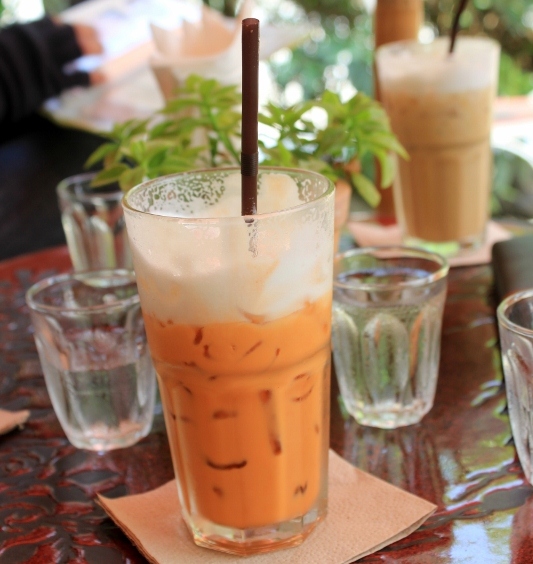 9. Indulge in Sticky Rice With Mango

When I first heard that sticky rice with mango (Khao Niaow Ma Muang) was a popular dessert in Thailand, I thought ‘where’s the chocolate?’. But, after tasting this classic made with Thai sweet rice I forgot all about its lack of cocoa.

It is served at many restaurants around Chiang Mai, but my favorite one was at Brown Rice Organic Bistro. 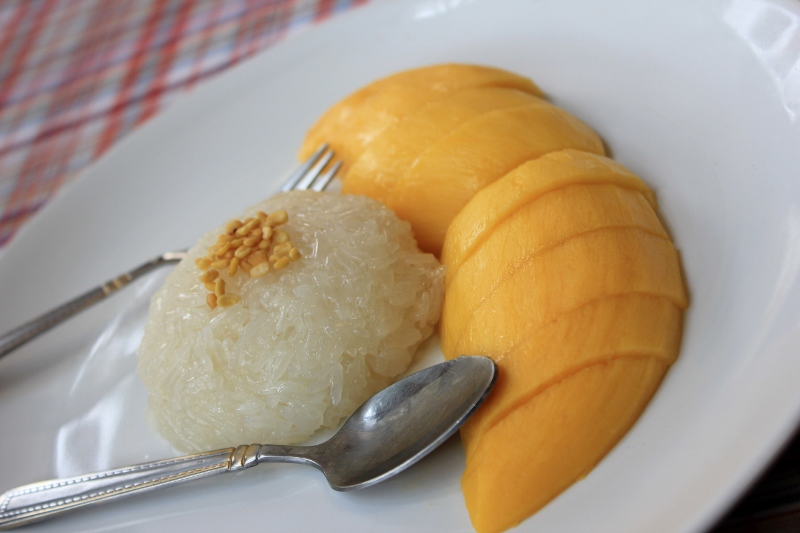 10. Get a Thai Massage in Thailand

On my last day in Chiang Mai, I realized that I had had an embarrassing amount of foot massages, including one by a prison inmate, but had not indulged in a traditional Thai massage. There was no way I could possibly leave this country without being able to say “I got a Thai massage in Thailand”

I headed over to the hoity toity Fah Lanna Spa and where a one hour Thai massage for 400 baht ($12.00 usd). Expensive by Thai standards, but worth every penny.

Read > Get a Thai Massage in Thailand 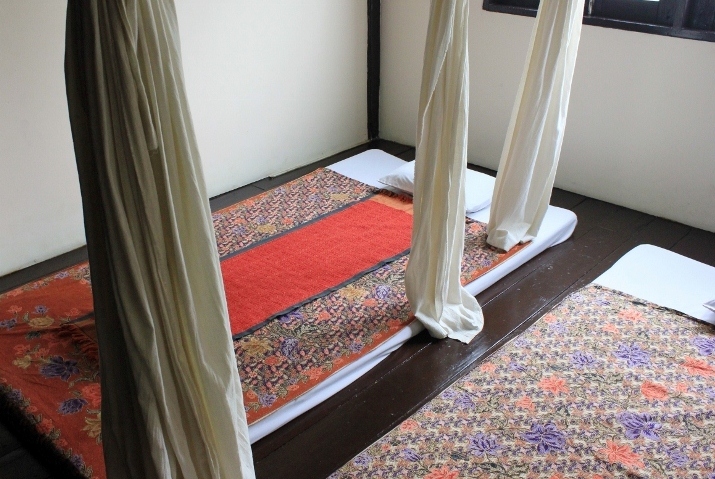 Khao soi, a northern Thai coconut curry soup, is an iconic part of the regions cuisine. It is made with a red curry, a splash of coconut milk, chicken and crunchy noodles on top.

I ate this delicious bowl at Ginger & Café. 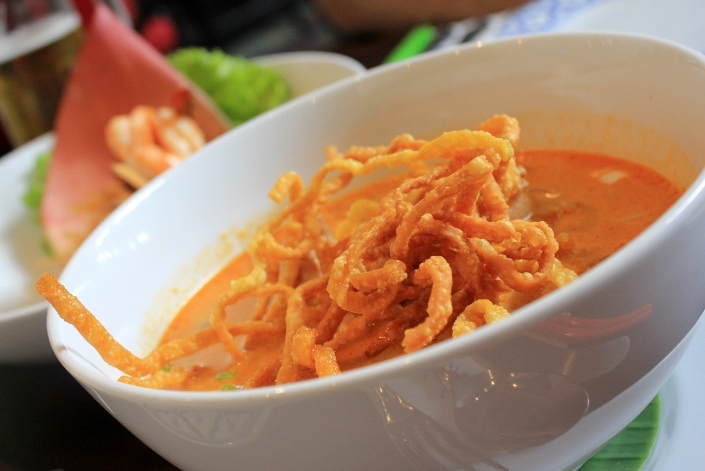 I was a bit hesitant to try my hand at hitching a ride on a songthaew. These shared taxi trucks took a bit more understanding to master than the tuk tuk. You will see dozens of them throughout the city of Chiang Mai and they basically have no scheduled routes. You wave one down, tell them where you are going and they either nod their head indicating to get in or shake it to non-verbally say that you are out of luck.

The standard charge is 20 baht, unless you actually ask how much they charge, a sure sign of a tourist, then they will immediately quote you double. Don’t ask.

After you get the hang of it, it is the most practical and economical way to go, as long as you are clear about where you are heading. 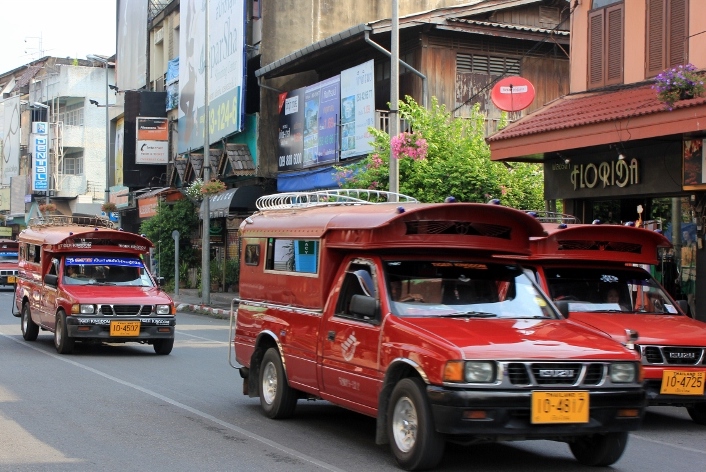 The Elephant Nature Park is an elephant rescue and rehabilitation camp where visitors can get an elephant education, plus feed and bathe these majestic creatures. The park is located just an hour from the Chiang Mai city center and they will even pick you up at your hotel to take you there. This was one of my favorite things to do near Chiang Mai.

Read > Bathe Elephants at a Rescue in Thailand 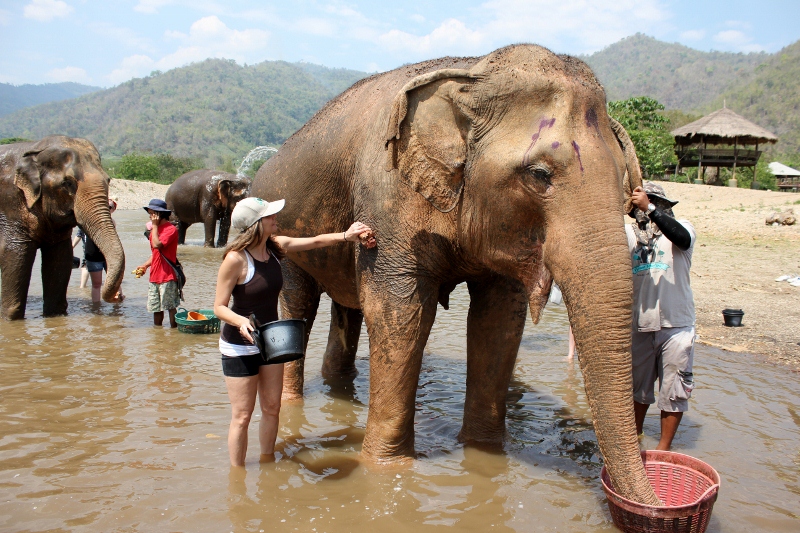 There are a dozen reasons to go the Chiang Mai’s famous Sunday night market and shooting a beebee gun is one of them.

A round will run you a whopping 10 baht (0.30 cents USD), but it may cost you significantly more to actually hit the bull’s-eye. 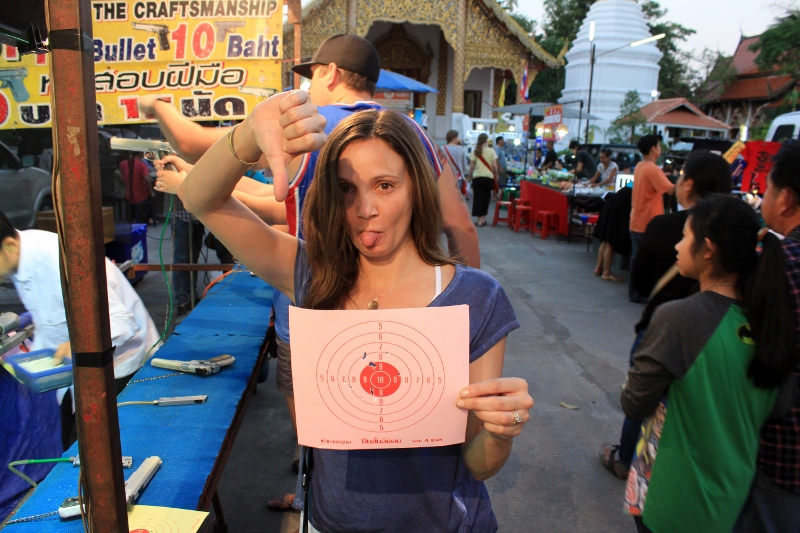 On the grounds of Wat Suan Dok you can indulge in a delicious meal at Pun Pun. This organic restaurant is a project aimed at supporting local organic farmers and farmer networks. Using the freshest ingredients you will find everything from a mixed vegetable salad to deep fried shitake mushrooms. 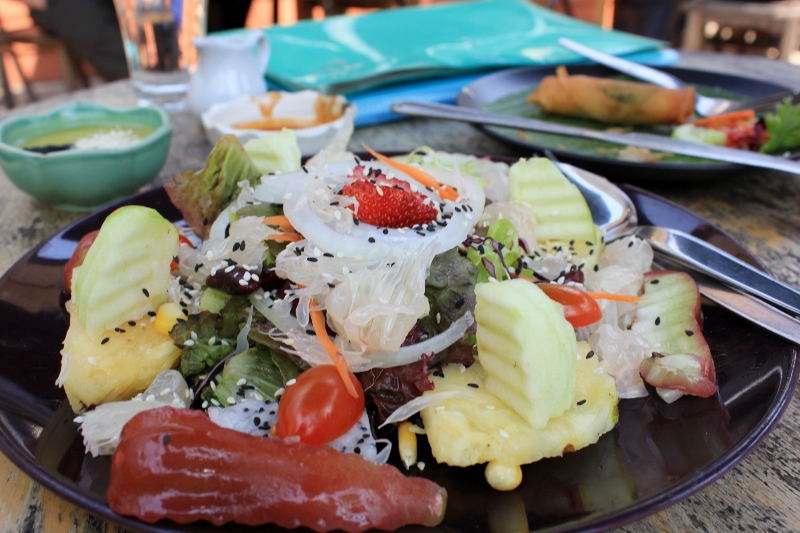 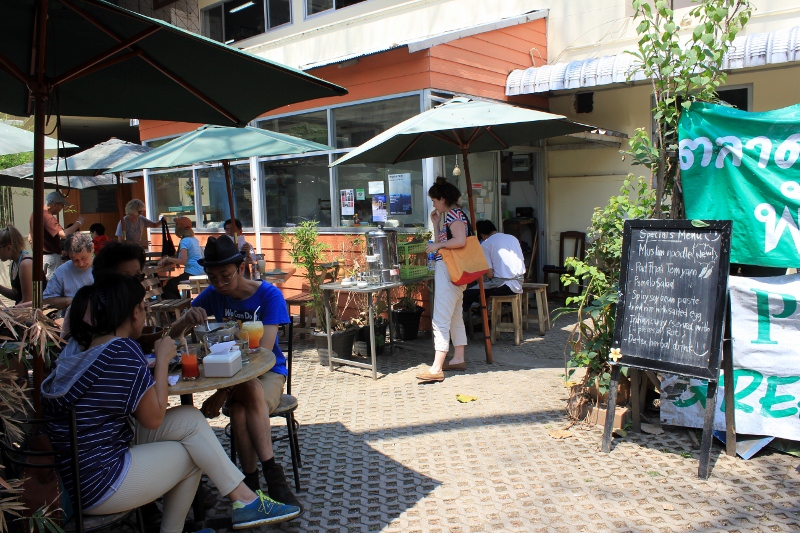 After traveling for a week in Chiang Mai, I was just about all templed out. But, that was before a short trip to the peculiar White Temple in Chiang Rai. The White Temple, Wat Rong Khun, is an unconventional Buddhist Temple located about 2 1/2 hours north of Chiang Mai. And it is a vision of pure white. Go figure. The Wat Rong Kuhn is decked out in white, meant to symbolize purity. 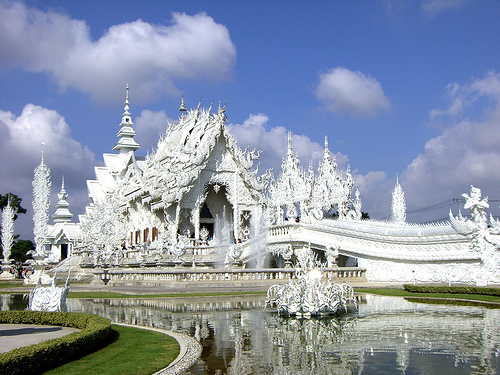 About 8 km Southeast of Chiang Mai, the umbrella factory at Bo Sang Handicraft Centre is a bare-bones production factory, with workers scattered about making every part of the umbrella, from start to finish. Even the paper was created on premise and meticulously applied by a single woman. 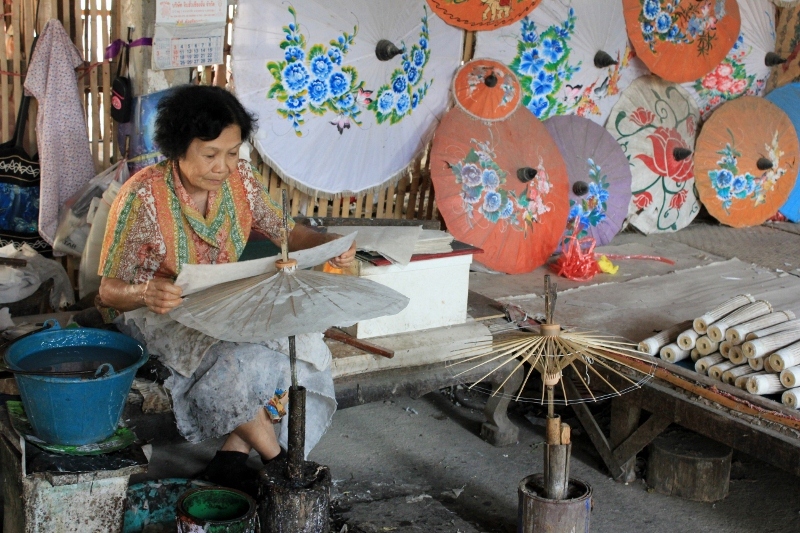 Wat Chedi Luang is an eye-catching Buddhist temple that is centrally located inside the Chiang Mai city walls. It is worthy of your bucket list to explore its large viharn (sermon hall), naga dragons at it’s doorstep and the ruined brick chedi that sits behind the grand assembly hall. 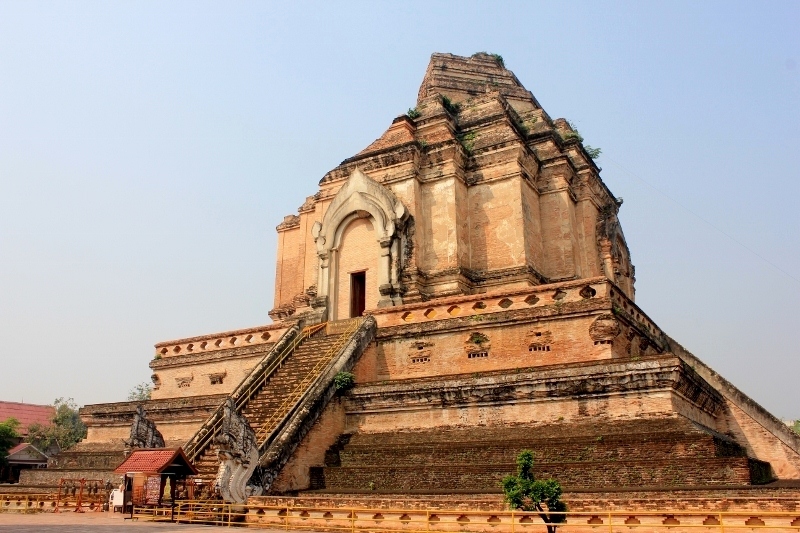 Getting There: Chiang Mai International Airport is a major hub and most airlines will fly into it. You can easily check for the best fare deals at Skyscanner, which also has the option to choose ‘cheapest month’ as the departure to find the lowest priced dates to fly to your destination. From the airport to the city center, taxis, songteaws (red taxis) and tuk-tuks are available. Most hotels will also arrange shuttle services for pick-up and drop-off.

Where to Stay in Chiang Mai: It’s best to stay near the city center, public transportation or the area that you will be spending the most time in. Nap In Fest (moderate) in Fa Ham, and BB Mantra Boutique Hotel (moderate) in Si Phum, are both great choices and provide airport shuttles. For something on the less expensive side, try the DPHouse in Si Phum, or Stay with Me Guest House located in Chang Moi. For a hotel with a little more extravagance, book a room at the Siripanna Villa Resort or Stay with Nimman Chiang Mai (both include airport shuttles). Or search some great deals on hotels of your choice at Booking.com. If you’re looking for more of a home atmosphere (or are traveling with a group of people), head over to Airbnb that has houses, apartments and even just a room for rent in every price range.

Getting Around: There are many ways to get around in Chiang Mai. The best way to explore the Old City is on foot. Tuk tuks are also a great way to experience Chiang Mai, just be sure to agree on a price before getting on. Songteaws (red taxis) are also available all over the city. For more information read: Traveling by Tuk Tuk & Other Transportation. If you decide to rent a car, RentalCars.com has some great deals.

Insurance: It’s always a good idea to travel fully insured so you are protected in case of trip cancellations or medical emergencies. You can check out pricing at Travelex Insurance.

Get a Thai Massage in Thailand
Eat Insects at Chiang Mai’s Sunday Night Market
Bathe Elephants at a Rescue in Thailand
Wat Chedi Luang: Explore a Temple Inside the City Walls of Chiang Mai
Learn to Make Handicraft Umbrellas in Chiang Mai
Get a Foot Massage by a Prison Inmate in Chiang Mai
Traveling by Tuk Tuk in Chiang Mai & Other Transporation
Make Wishes at the White Temple in Chiang Rai
Tour an Insect Museum in Chiang Mai
Thailand Elephant Sanctuary: 5 of the Best Rescues in or Near Chiang Mai