Learn to Make Pasta From a Nonna in Italy

I had many regrets when my adorable Italian Nonna passed away several years ago. But, the one that still haunts me today is that I didn’t give her my undivided attention while she was making all of her traditional recipes that she brought to America from her tiny village in Northern Italy. I vividly remember her sweet, stubby fingers rolling potato gnocchi and stuffing fresh raviolis for hours in the early afternoon. Though I received some sporadic lessons, all of her delicious Italian recipes were never written down. Today, I would give anything to taste one of her specialty dishes again.

While staying at the Palazzo Donati palace, in the Northern Italy town of Mercatello sul Metauro in Le Marche, I got a tagliatelle lesson from Nonna Lina Mazzanti.

Lina started making pasta at the age of ten, which is not terribly uncommon in Italy. She has won top awards at the pasta competition in the village for the past ten years. If a pasta lesson couldn’t be given by my actual grandmother, Lina was definitely qualified as a substitute teacher. 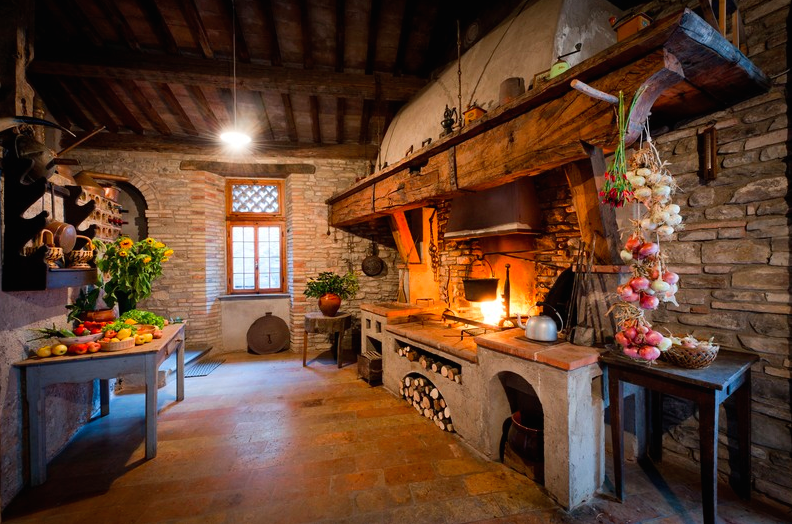 The class was being taught in the rustic, downstairs kitchen of Palazzo Donati, as wood burned in the open fireplace in the background.

Lina, working on a table in the center of the room, started with making the dough. The recipe was simply 1 egg per 100 grams of flour.

That’s it. No salt. No water. No semolina. No big secret.

She pour the flour on the wooden cutting board and created a well. The eggs were put into the center, protected by the flour wall she had built. 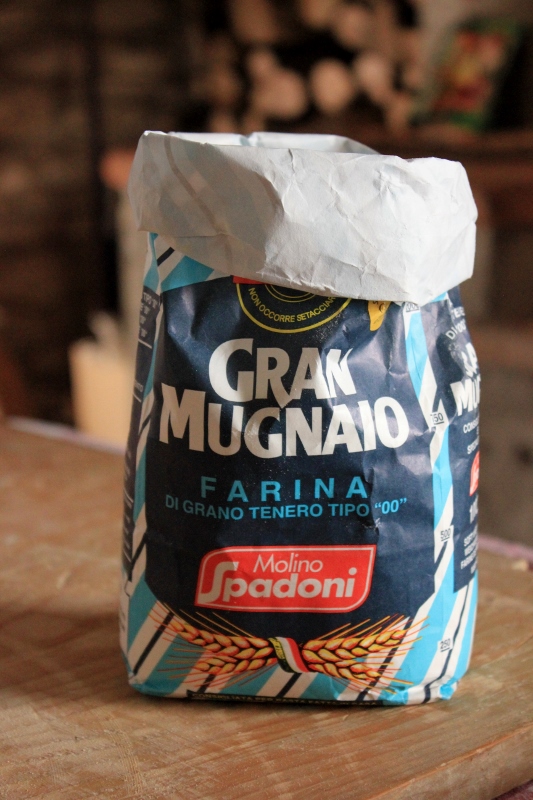 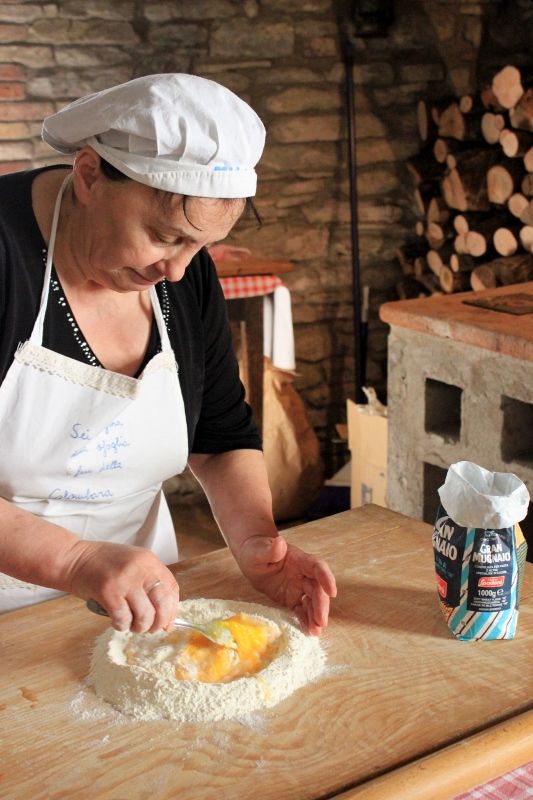 She mixed the two ingredients together and kneaded the dough by hand for twenty minutes.

There was no such thing as a Kitchenaid mixer in her world.

When the pasta dough had some elasticity to it, it was set aside to rest for another twenty minutes. 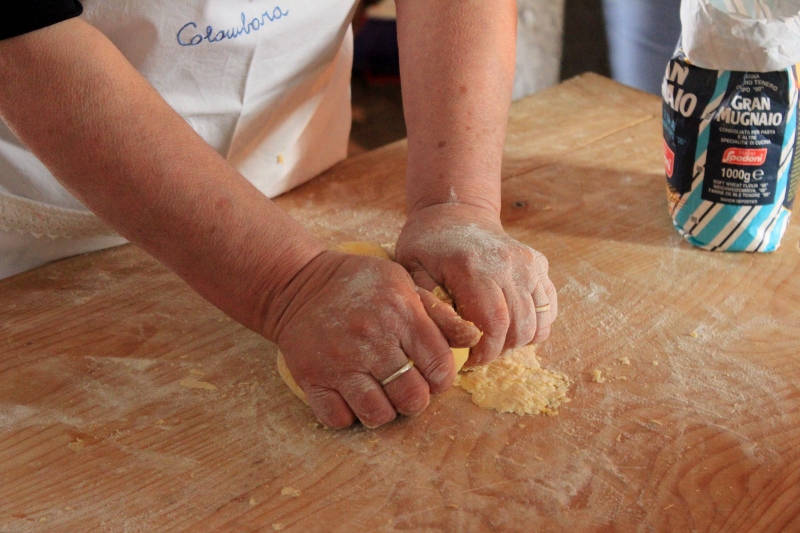 Then, Nonna Lina rolled the dough out entirely by hand using a long, wooden rolling pin.

There was no metal pasta maker in sight.

It took at least fifteen minutes to roll it to the perfect thickness on the wooden board that she kept accusing of being way too small for what she was trying to accomplish. Once it was flattened perfectly, it was left alone to dry for an hour. 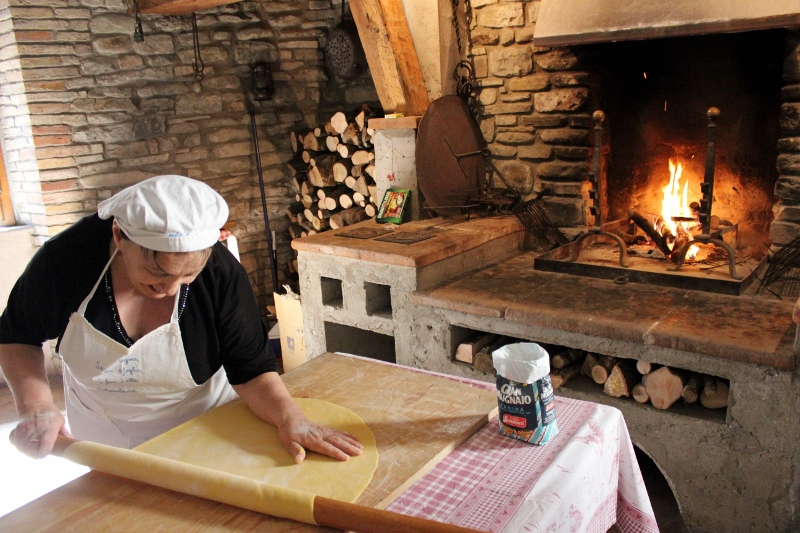 It was then folded in half, then half again, and cut by hand into thin strips of tagliatelle. She floured and haystacked each portion making neat little packages that were now ready to turn into a meal. 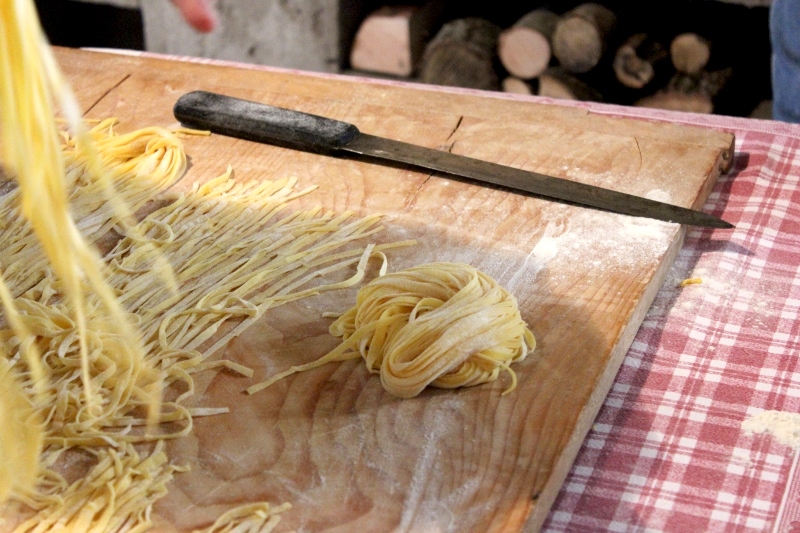 We ate a lunch at Palazzo Donati using this uncomplicated pasta recipe, which was turned into a delicious tagliatelle with a bolognese sauce. Some of the best food in the world is so simple.

I would never disrespect my Nonna by saying Lina’s was the best, but let’s just say I can understand why she has been the pasta competition winner over the last several years. 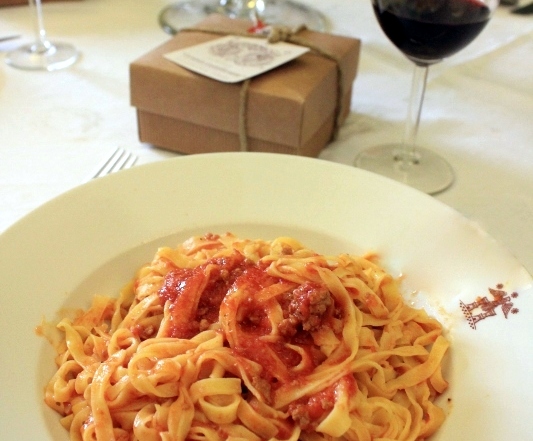 You can have a pasta cooking lesson arranged by Luisa when staying at Palazzo Donati which is in the Le Marche region of Northern Italy.

Disclosure: I was a guest of Palazzo Donati, but all the words I write come straight from my, sometimes distorted, mind. Just as it should be.

Florence Bucket List: 40 of the Best Things to Do in Italy’s Top City
Northern Italy Dream: A Stay at a Luxury Farmhouse in Tuscany
10 Foods for your Italy Bucket List
Stay in a Tuscan Villa in Italy
Walk on the Via Dell’Amore Trail in Cinque Terre
Drink a Bellini at Harrys Bar in Venice, Italy
11 Things Restaurants in Italy Do Differently
Scale the 463 Stairs of the Florence Duomo
Things to do in Florence in a Day
Bucket List of 6 Amazing Northern Italy Views
Italian Adapters, Converters & Voltage (AKA: The Flat Iron Dilemma)
10-Day Northern Italy Itinerary