A three and a half hour drive from the bustle of the city of Hanoi lies a peaceful set of 1,600 islands and islets, Ha Long Bay. This bay has been the backdrop to many movies, including the Oscar winning Indochine, and has also been featured on many “Things to Do Before You Die” lists, including my own.

So, when my travels landed me in Hanoi there wasn’t even a question that I’d spend one day taking a seven hour round trip van ride to witness one of Vietnam’s UNESCO World Heritage sites in the Gulf of Tonkin. 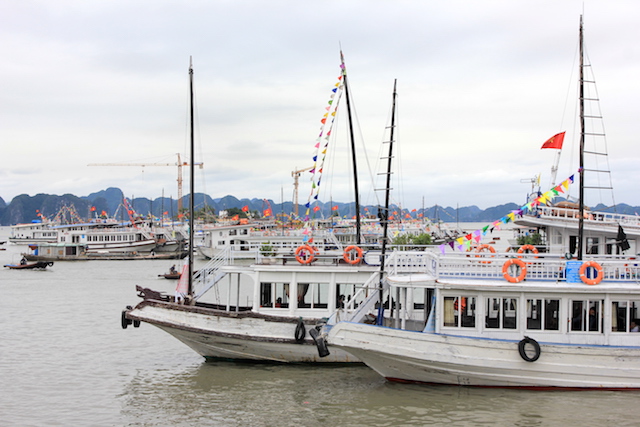 Many people choose to stay the night, or several, on a junk boat in Ha Long Bay, but we only had the time for a one-day tour. We needed to get back to the city to indulge in more unusual street food in Hanoi. Besides a twelve hour day is like working a Friday at my restaurant, except this one would be minus a backed up grease trap, any employees and dirty dishes. Easy Peasy.

We left the city early in the morning, heading towards the bay when a traffic jam stopped us in our tracks. Two buses collided and caused a halt in every direction on the main route. We maneuvered out of the way to take the longer route. Add an hour to that previously mentioned twelve. 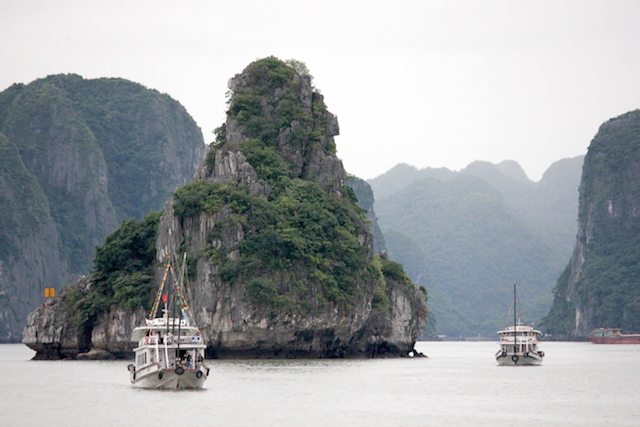 The driver had warned us prior to arriving to Ha Long Bay, that the weather is typically rainy or misty with the slimmest chance of escaping one of the two. Especially on this particular week where every tour he led resulted in the guests ducking into the covered portion of the boat instead of enjoying the view from the top deck.

There goes the photo ops.

But, when we got there is was cloudy and that’s it. There really was no sun, but we weren’t getting wet. I’ll take it.

We boarded our junk boat, which was a touch smaller than the Hong Kong junk boat that had taken me through Victoria Harbour. Though on this tour there were only a total of six people, the entire boat was reserved for three guests and three crew.

After a brief introduction to the boat, lunch was served as we made our way towards the islets of Ha Long Bay.

We would not be going hungry on this tour.

We were served a cucumber salad, spring rolls, shrimp, fried pork with sesame, squid, rice and a whole fish that the crew deboned table side. There was enough food to feed a dozen passengers, not just our quaint little group. 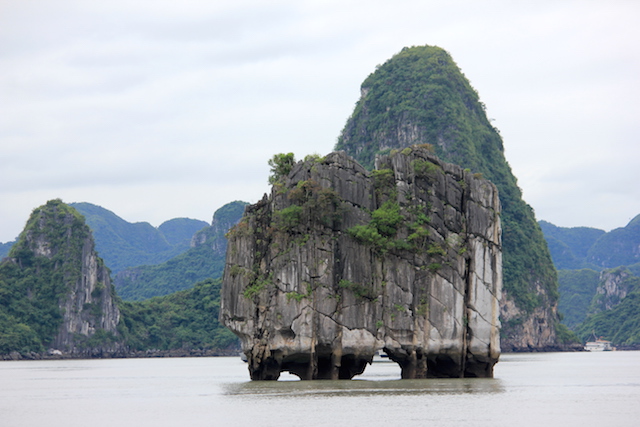 After enjoying lunch, we climbed to the spacious top deck and relaxed on a lounge chair to marvel at Ha Long Bay, a name that means ‘bay of the descending dragons’.

According to legend, when the Vietnamese were fighting off foreign invaders, the gods sent a family of dragons to assist in defending their country. These dragons began spitting out jewels that turned into the islands and islets that now are scattered around the bay.

The may even be prettier than diamonds. 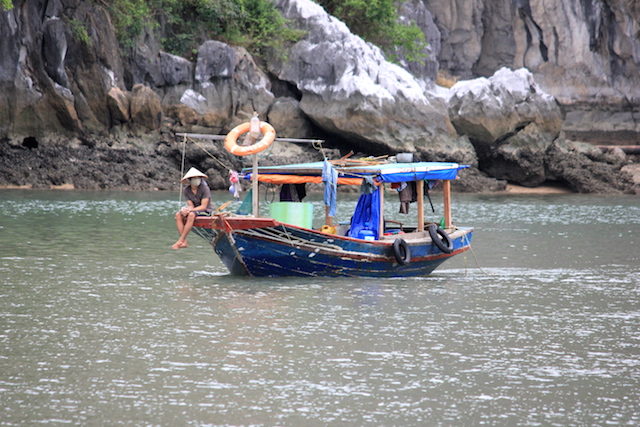 Along the route we passed through a collection of floating homes, though nobody actually lives in them anymore. The former tenants were moved to the mainland in 2014 in order to protect the environment.

Although you can still see the fisherman out on the bay, working on their small boats, sometimes with their children in tow. 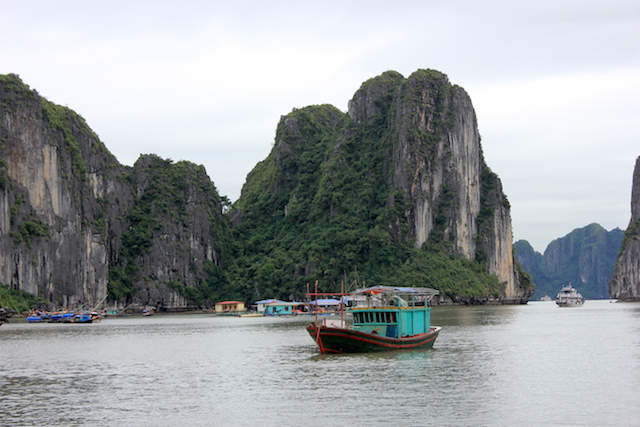 Before finishing this jaw-dropping tour of Ha Long Bay the boat stopped at the Dao Go, a three chambered cave. There were 90 steep steps to climb in order to witness the hundreds of stalactites falling down from the roof, which in some areas was 82 feet high.

I had mixed feelings about the rainbow colored lights enhancing certain formations.

It made the natural beauty of Dao Go seem more like an amusement park attraction. But, there was still no denying that it is a breathtaking part of the world. 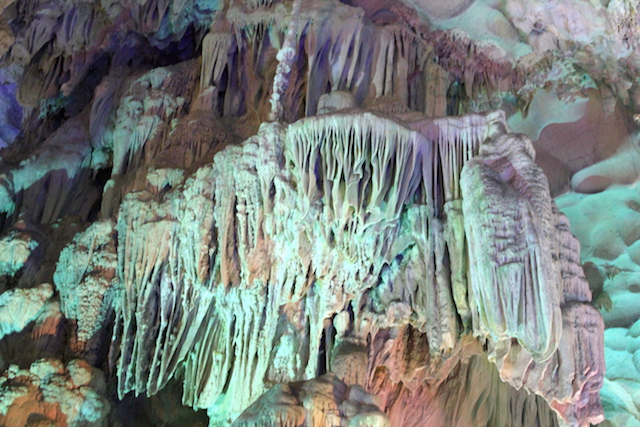 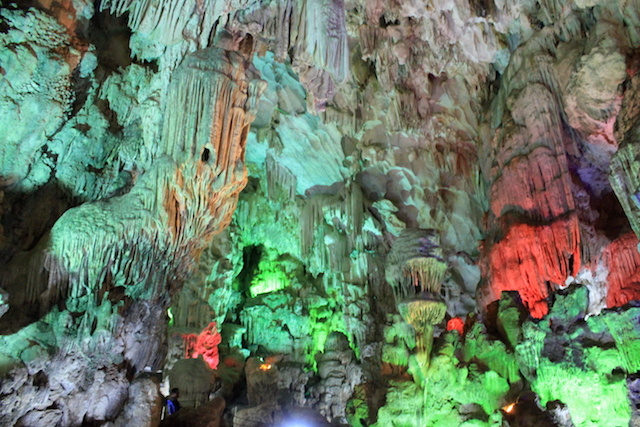 Heading back towards our starting point, Peter and I were able to catch an essential selfie, just a couple minutes before the sprinkles of rain started.

Thank you mother nature for cooperating.

More Info: The trip mentioned above was the Halong Bay Small Group Adventure Tour booked through Viator (they also do a 3-day Halong Bay Tour). Though it made for a long day trip, I was more than happy to return to the down pillows at my hotel.

Other Things to do in Hanoi