The streets of Hanoi are lined with small cart vendors who set out their miniature red and blue plastic chairs along the sidewalks. In the mornings the customers are drinking the shops Vietnamese coffee or green tea with a bowl of Phở and in the afternoon they could be eating anything from a Banh Pate sandwich to barbecued frog legs to ragworm cakes.

This seemed to be representative of the food truck movement in its infancy. 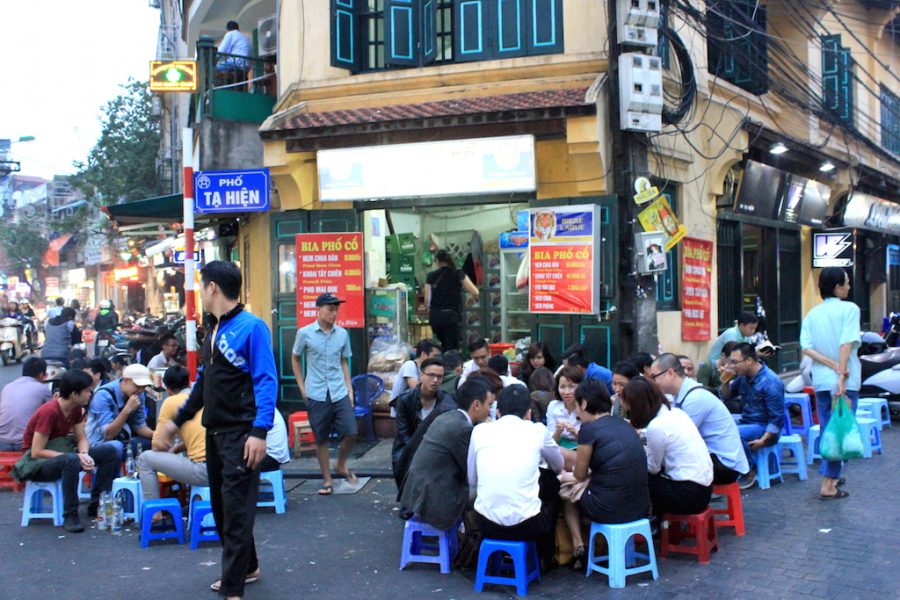 For the complete food experience, I wanted to eat every bizarre and traditional Vietnamese street food during our visit to Hanoi, so I hired an expert from Viator to show us the ways of the street, on their Hanoi Street Food Walking Tour. The tour would begin at the North end of the lively night market and lead us through the chaotic streets of the Old Quarter, nibbling along the way.

It all started with a Banh My Pate, a thin roll filled with crispy shallots, chile sauce, sliced cucumber, coriander and pate. A nice sized snack for a mere 5,000 Vietnamese dong, about a quarter.

That would barely buy me a gumball back in the States. 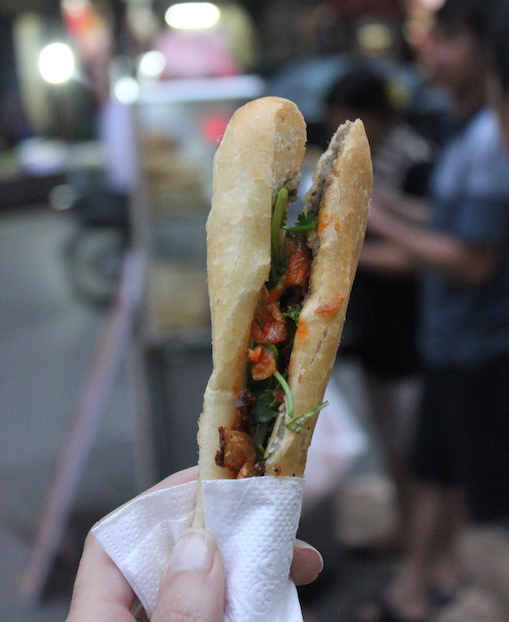 We then walked over to fruit, vegetable and flower market, a temporary set of mobile shops where bicycle entrepreneurs peddled their goods illegally. When the cops drove by, they all scattered like mice not wanting to get ticketed. But, immediately returned when the coast was clear.

Here we snacked on rambutan, a fruit similar to lychee, but larger and sweeter. We also tried red dragon fruit and the tiniest bananas ever.

Monkeys all over the world would be pissed. 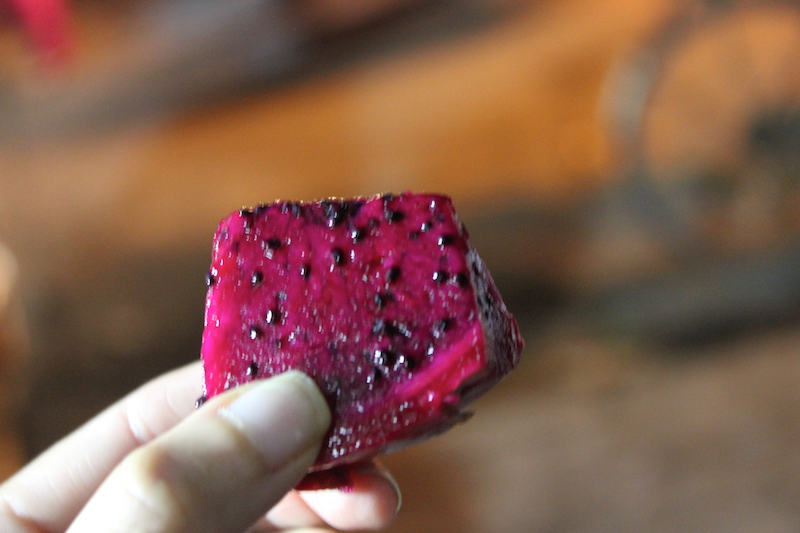 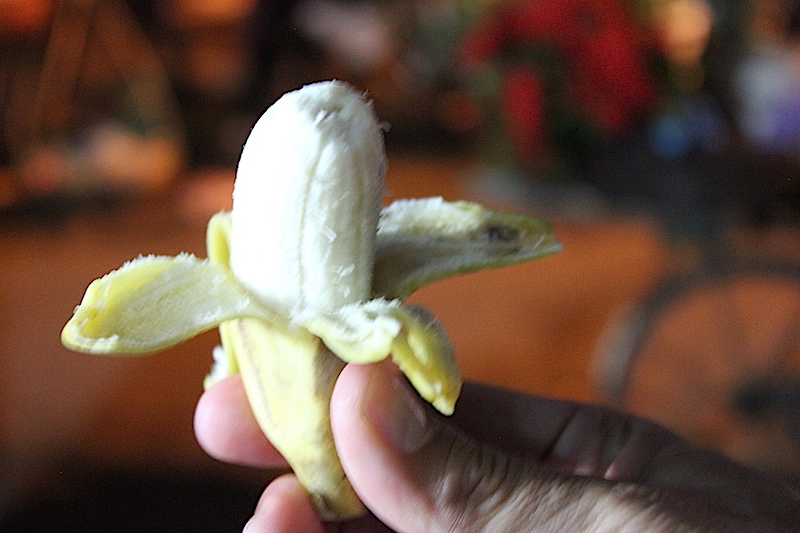 Another section down a narrow street seemed to be for the more adventurous eaters. An elderly woman had set up a propane, one burner stove to sell her fresh ragworm cakes, the live ingredients squiggling right next to the frying pan. The patties, about the size of a McDonalds hamburger, are a combination of worms, mandarin peel, dill and the chefs choice of spices. For just a dollar, the owner fried them up fresh.

They were flavorful, tasting more like a minced meat pie than what you would expect a dirty worm to taste like.

Even so, my stomach churned.

it was difficult for my mind to erase the fact that I was eating worms that were alive just a few minutes prior to being in my stomach. 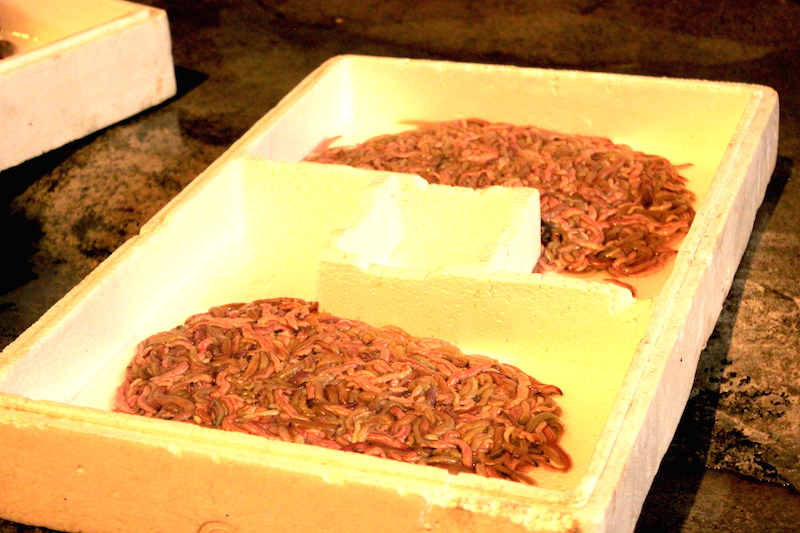 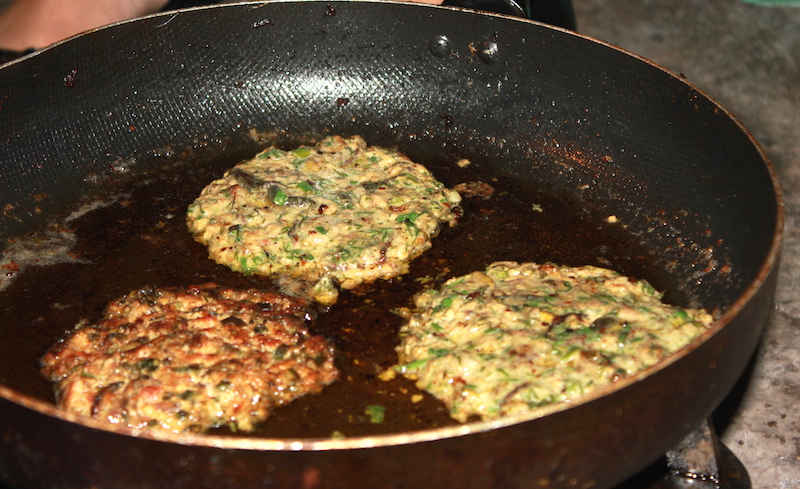 The next stall over featured a pan of freshly fried silk worm larvae that were reminiscent of the insects I had eaten while in  Chiang Mai. Maybe not the best food in the world, but surprisingly, this looked appetizing after having just eaten worms. I popped a couple into my mouth and got a oily burst of flavor.

Just like an oil-filled cheese puff, minus the delicious artificial flavoring. 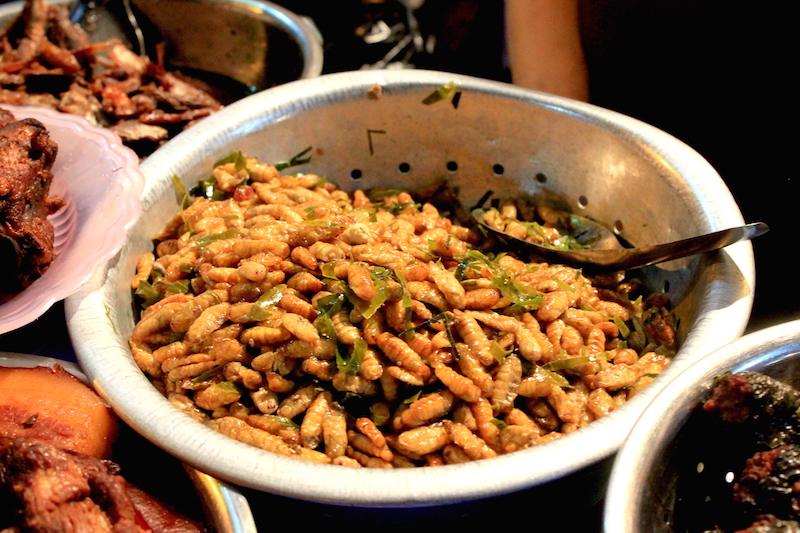 Another vendor was making Banh Cuon, a crepe-like dish made with rice flour and stuffed with minced pork and mushrooms. They were rolled onto a plate and topped with fried shallots and coriander. We topped it with spicy, red bird’s chile and ate them with nước chấm, a Vietnamese dipping sauce.

Truth be told, I skipped the peppers after testing one for it’s heat. Too hot for this WIMP. 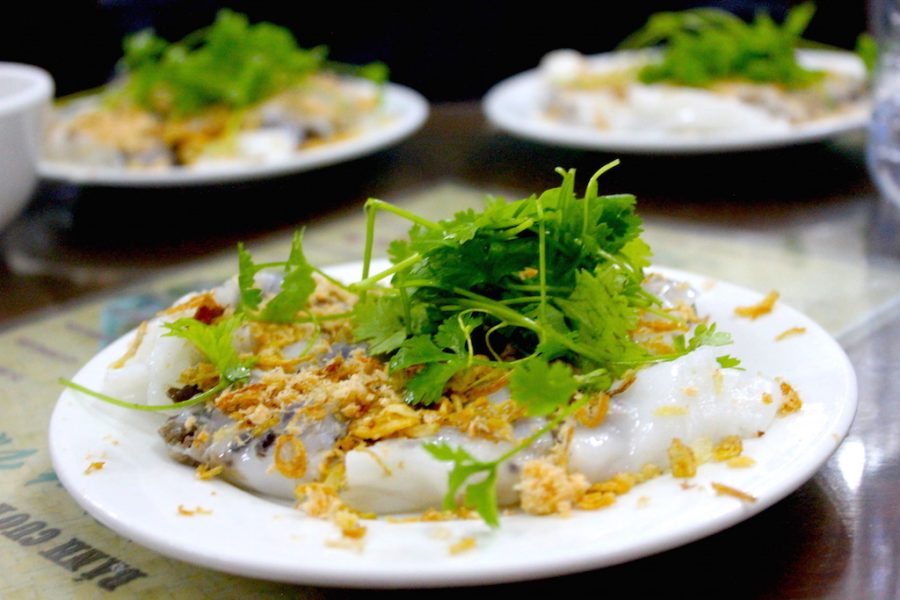 For the Hanoi street food main course we stopped at a well known Vietnamese grill, Thai Dat. The center of the shop featured a table with a dozen varieties of skewers and to the right of the raw food, a flaming grill ready for action.

Pick your pleasure and the staff will grill them up for you. 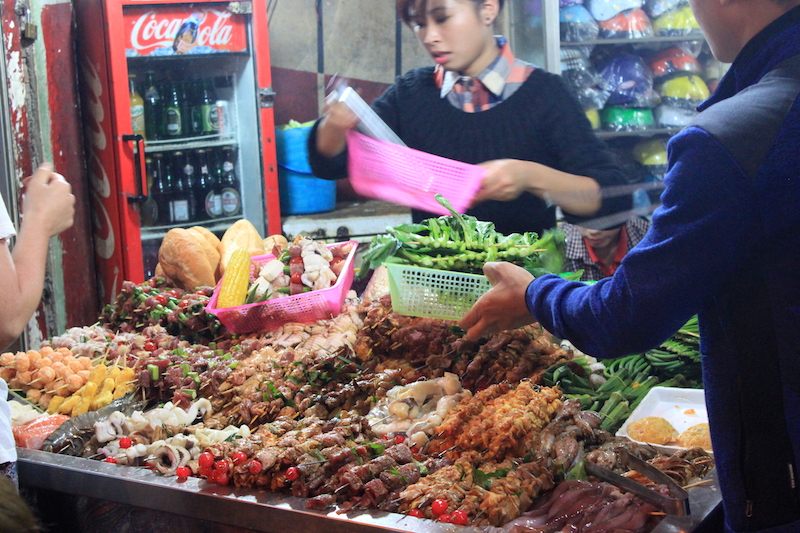 We ordered frog legs, pork belly, duck tongue and beef, then took a seat at one of the tiny tables with a steel top. There was a heating pan in the center that would be used to keep our future food warm. 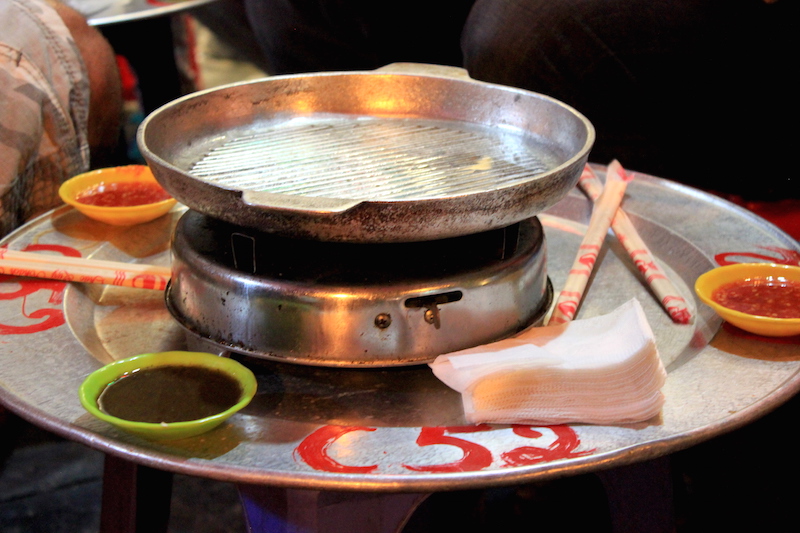 Almost immediately we were served grilled corn, bok choy, leeks and a honey bread, all tasty appetizers to the main course.

A few minutes later, as each skewer was ready, they began throwing the cooked meats into the middle of our grill. Though the frog legs were meaty, the tastiest grilled item was the pork belly wrapped around vegetables.

Pig is always a winner in my book, especially in the form of bacon. 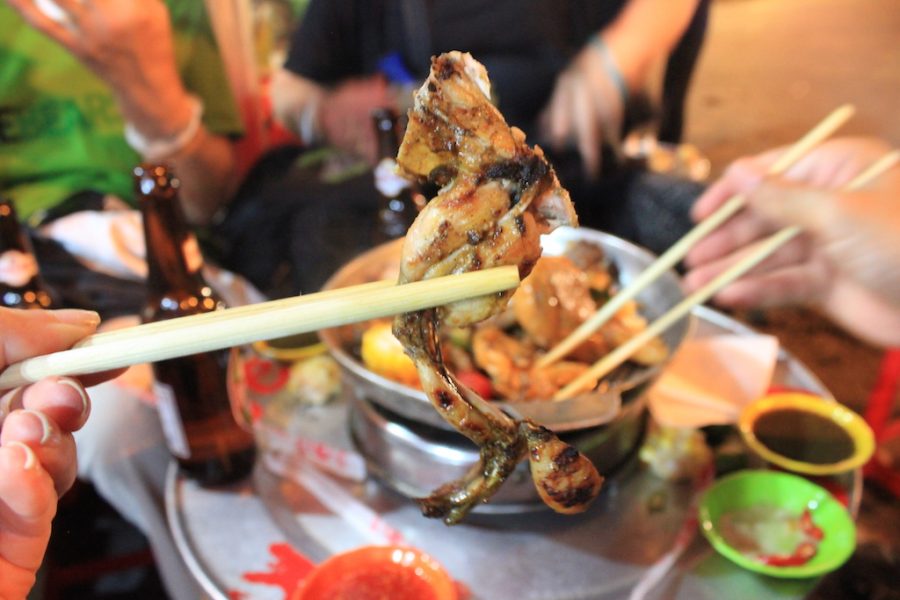 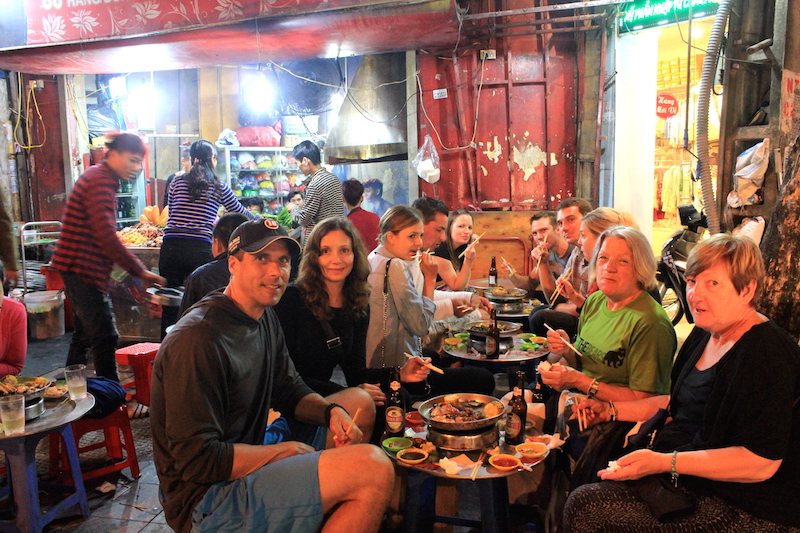 Time for a little dessert in Hanoi.

About ten of us squeezed into the smallest covered dining room for a traditional Vietnamese dessert, Che Thai. It’s actually and adaptation of a Thai dessert, but was very common in Hanoi. It was made of mixed tropical fruit (lychee, water chestnut jelly and watermelon in this case), green jelly and coconut milk.

A bowl of crushed ice was served by its side, to be mixed in to liquify the coconut milk just before you are ready to eat. 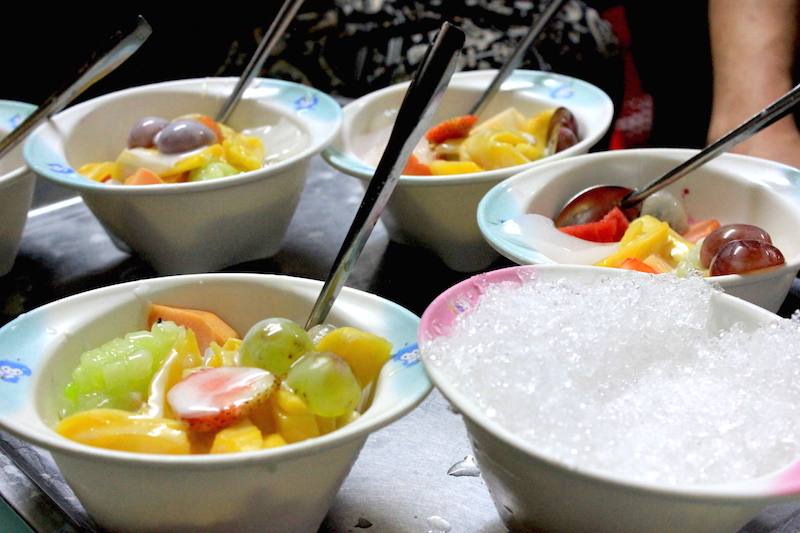 After the almost four-hour food fest was over, it was time for a special coffee to wash it all down. We were led to a secret coffee shop, Cafe Pho Co, whose entry was located in the back of a retail store. Here we ordered a few cups of cafe trung for 40,000 dung each ($1.87 usd). We then climbed the four stories to the top in order to get the best view while sipping on our drinks.

The foamy beverage made with coffee, sugar, egg and sweetened condensed milk was served to us while seated on the top floor.

And it was delicious. So much so, that I went back the next day to have another. 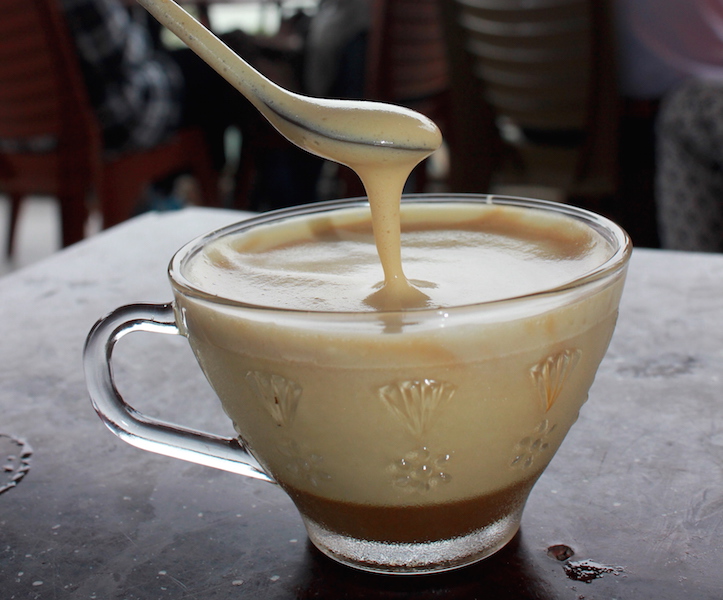 I happily walked back to my hotel hoping to burn off some of the calories that had just been ingested, but also hoping that I wouldn’t poop out a worm the next morning.

Other Things to do in Hanoi