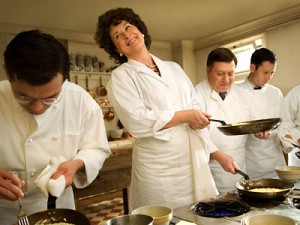 After you have satisfied your gastronomical needs with a fine dinner, grab some popcorn and watch these foodie movies centered around cooking, eating and cherishing food. This is a list of foodie movies where food plays an integral part of the plot, it is not just mere background. How many have you seen?

1. Antique (Korean, 2008)
Koreas best pastry chef is hired by a bakery owner who hates the taste of cake.

2. Babette’s Feast (Scandinavian, 1987)
In this popular flick on the foodie movies list, a French woman refugee flees to a small village in Denmark to become a housekeeper and cook. After Babette’s fathers death she decides to recreate a real French dinner.

3. Big Night (1996)
Two immigrant brothers own and operate a restaurant in a small town on the Jersey shore. They struggle with building their business while serving still serving authentic Italian cuisine.

4. Chocolat (British, 2000)
One of the sweetest of the foodie movies where a mother and her young daughter move to France to open up a Chocolate shop across the street from a church. She keeps her shop open on Sundays and tempts the religious folks during lent.

5. Cloudy with a Chance of Meatballs (2009)
Food drops from the sky like rain in the family animated comedy. Problems start when the size of the food gets larger and larger.

6. Eat Drink Man Woman  (Chinese, 1994)
A widowed chef cooks Sunday dinners for his three daughters, while one secretly wishes to follow in her fathers footsteps and become a culinary master herself.

7. Estômago – A Gastronomic Story (Brazilian, 2007)
A penniless man arrives in Sao Paulo and relies on his cooking skills for survival.

8. God of Cookery (Also known as Sik San) (Hong Kong, 1996)
One of the foreign of the foodie movies where a brilliant chef loses his title as the God of Cookery and works his way to pull himself back up to the top by challenging his rival.

9. Harold & Kumar Go to White Castle (2004)
Two friends embark on a quest for White Castle burgers, which proves to be a hard task to complete.

10. Julie & Julia (2009)
Probably the most popular of the foodie movies. Julie has 365 days to complete 524 recipes from the reknowned chef, Julia Childs, cookbook. She records her trials, triumphs and journey on a successful blog.

11. Kitchen Stories (Scandinavian, 2004)
Norwegian bachelors are observed by a research institute in order to modernize the home kitchen. The story is based on real experiments conducted in Sweden.

12. Le Grande Bouffe (French, 1973)
A black-comedy about four men who decide to literally eat themselves to death. They spend a weekend gorging themselves with gourmet food and  call girls.

13. Mostly Martha (Bella Martha) (German, 2001)
A career-minded chef gets custody of her niece, which drastically changes her life. She unexpectedly gets help from a handsome sous chef.

14. Nina’s Heavenly Delights (British, 2006)
A young woman returns to Scotland to run her deceased fathers Indian restaurant. She works towards saving the business and winning the upcoming curry competition.

15. No Reservations (2007)
A romantic comedy based on the German film, Mostly Martha. An intense chefs’ life is altered when she gains custody of her deceased sisters daughter. Her free-spirited, impetuous sous chef ends up also being her romantic interest.

16. Ratatouille (2007)
A computer-animated comedy where a young rat takes over the kitchen in hopes of following in the footsteps of a star chef he idolized. Unfortunately, it’s not so easy for a rat to be accepted in the culinary world. The only cartoon to make the foodie movies list.

17. Simply Irresistible (1999)
A romantic comedy where a chef gains magical powers after encountering an extraordinary crab and is able to then cook masterpieces.

18. Soul food (1997)
A family is held together by a Sunday night dinner of should food. When she is hospitalized the family begins to fall apart and her grandson has a plan to put it back together.

19. Soylent Green (1973)
A sci-fi tale from the “foodie movies” list, set in 2022 where natural foods are extinct and the only way to survive is eating a mysterious product called Soylent. Problems arise when a detective uncovers the secret ingredient of Soylent.

21. The Cook The Thief his wife Her lover (1989)
A restaurateurs wife considers having an affair with one of the customers.

23. Vatel (French, 2000)
Vatel, a culinary genius, is hired to prepare a feast for the arrival of King Louis XIV. Even though he is a master chef, several crises threaten to ruin the festivities.

24. Waiting (2005)
An over-the-top comedy based around the antics of the staff of Shenaniganz restaurant.

25. Waitress (2007)
A pregnant waitress is inspired by the trials and tribulations of her life. The extraordinary pie maker starts writing letters to her unborn child and her world starts to change for the better.

26. Who is Killing the Great Chefs in Europe (1978)
Chefs are mysteriously being murdered in the manner that their signature dishes are being prepared.

27. Woman on Top (2000)
A talented Brazilian chef moves to San Francisco where she lands a television cooking show and starts on a path towards fame.

Which films have you seen from the Bucket List of Foodie Movies to watch?