Most of us are guilty of having a ‘not-so-secret’ love affair with cheese (and I question anybody who doesn’t!). From gratin to fondue to a gooey grilled cheese sandwich, the velvety and creamy goodness is simply delicious. Sometimes you don’t even need all the hoopla of multiple ingredients, you just need the cheese itself. And that’s where French Comté cheese really shines.

Your cheese passion will go even deeper if you head to Eastern France to follow the Les Routes du Comté, a regional drive that will take you from the cheese farmers to the makers to the aging caves. You will experience the love and dedication that goes into producing this respected fromage firsthand. But, I’ll warn you if you try a bite or two on the road, you might end up with the whole 80-pound wheel in your back seat! 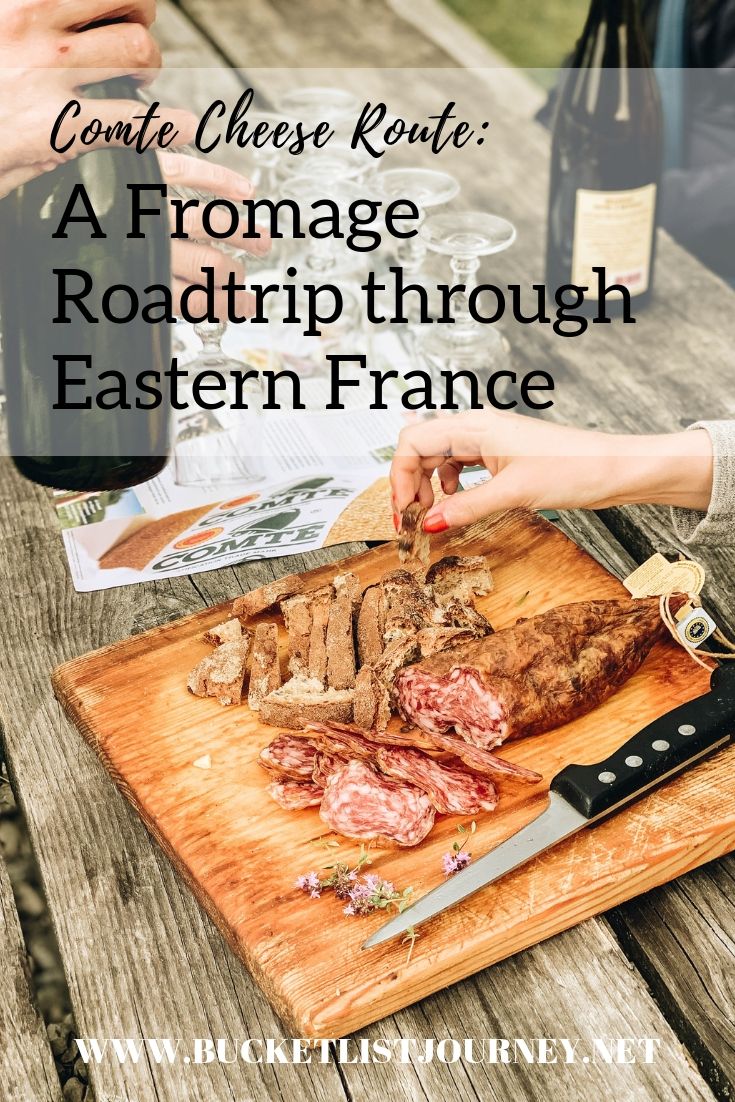 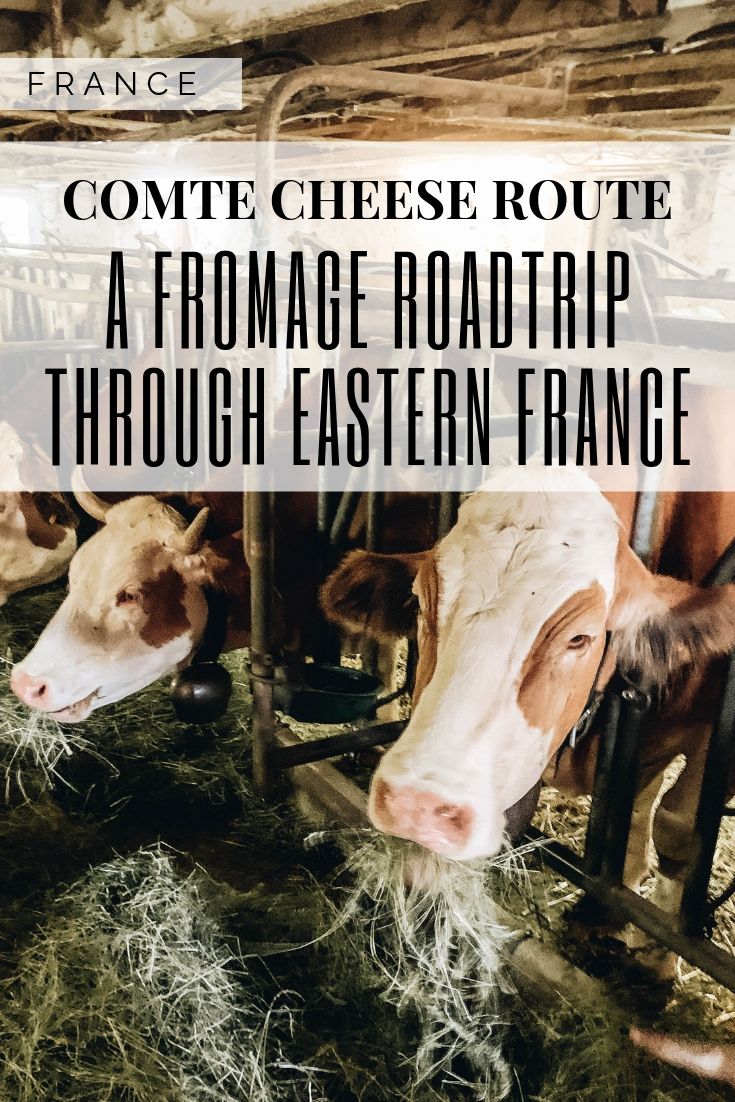 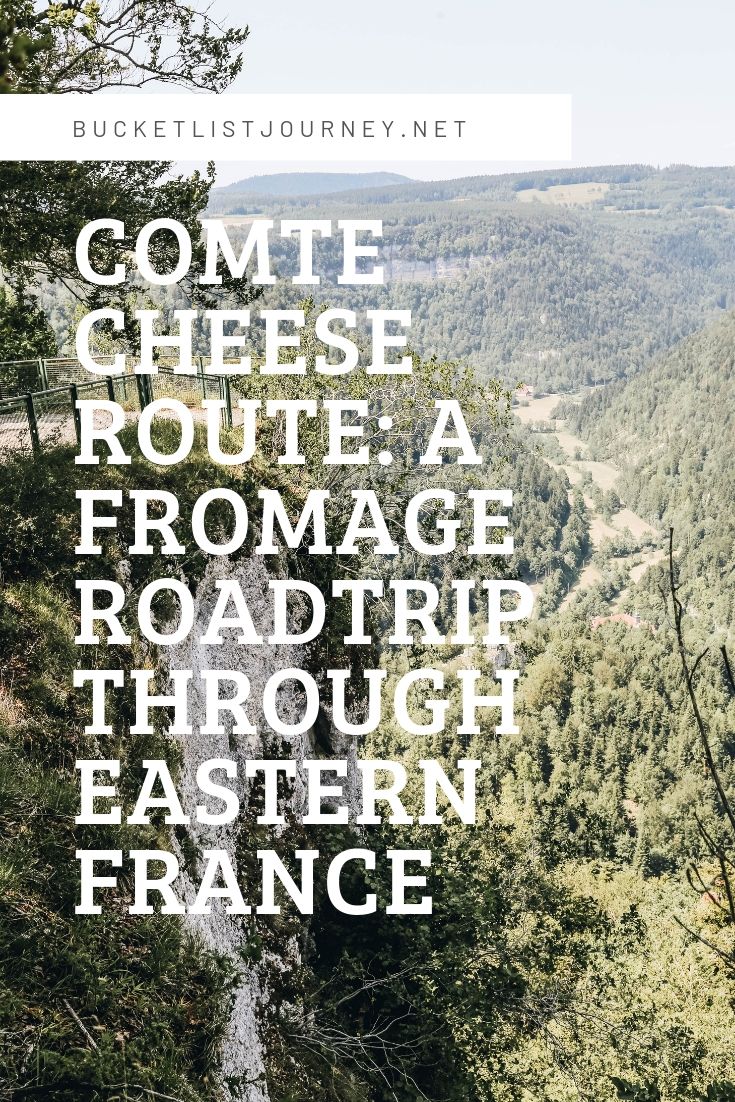 What is Comté Cheese?

Let me start by saying that it’d be hard to fit a huge wheel of Comte cheese in your fridge, but it deserves a good effort at trying! The popular French cheese is bursting with complex flavors with sweet, nutty, and savory undertones. It is produced in the East of France in the Jura Massif, a mountainous region lying along the scenic France–Switzerland border. This is where the farmers produce the milk, the cheesmakers prepare the rounds and the affineurs age the cheese to perfection.

Even though I am a sucker for just a plain chunk of cheese (maybe dipped in a little orange marmalade!), Comté itself is very versatile. It can be melted for a tasty fondue, used to thicken a sauce or served on a cheeseboard—here are some tasty recipes.

Worried about eating too much cheese? There are actually some benefits: A one ounce serving of Comté contains a third of the daily recommended value of calcium and is among the least salty cheeses! So, there. 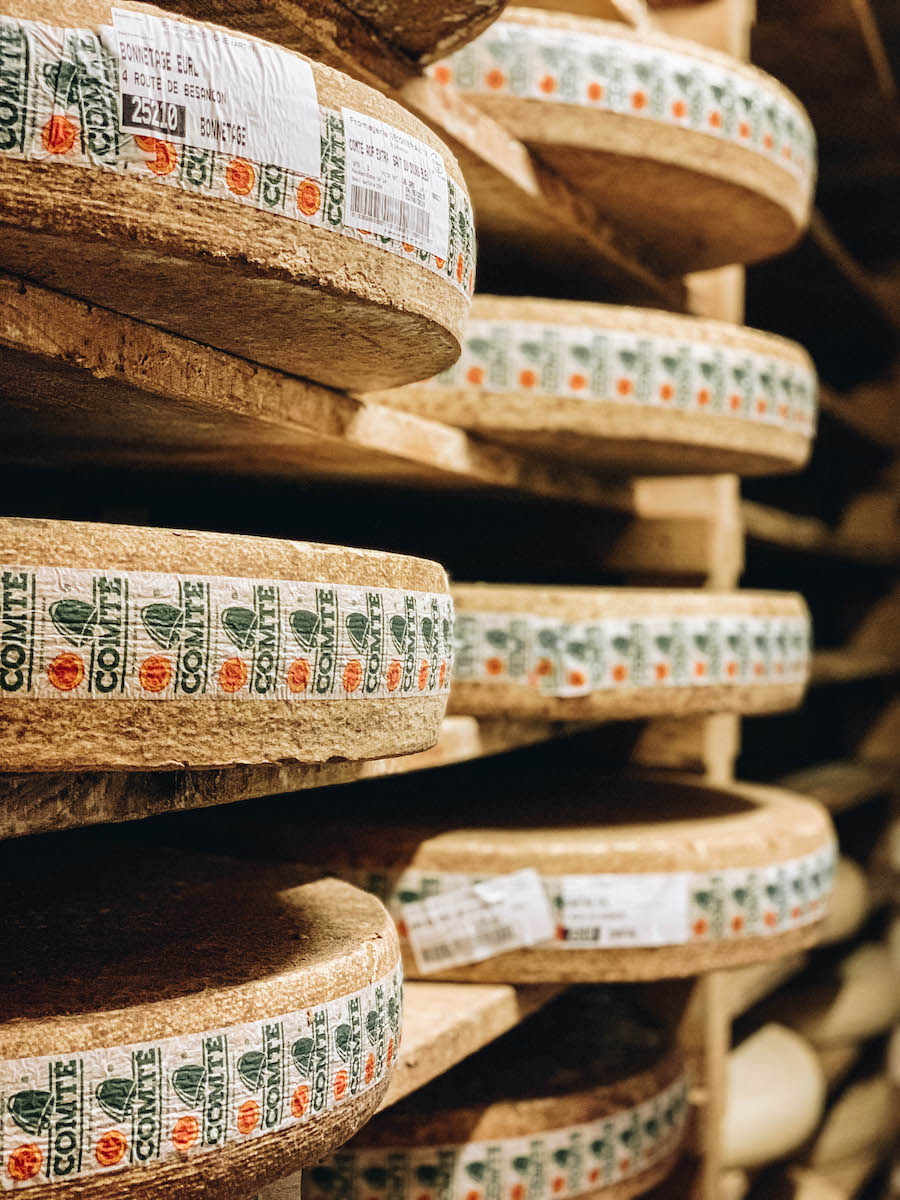 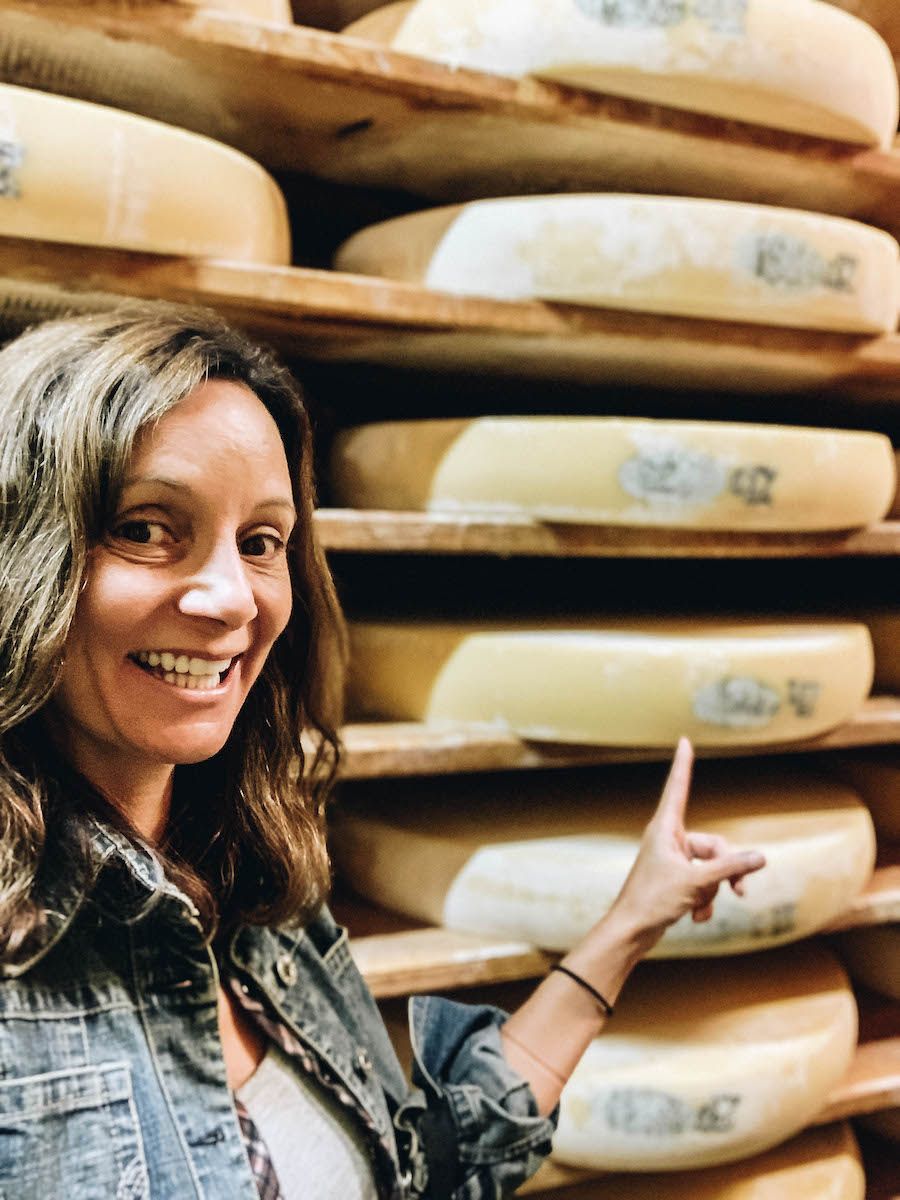 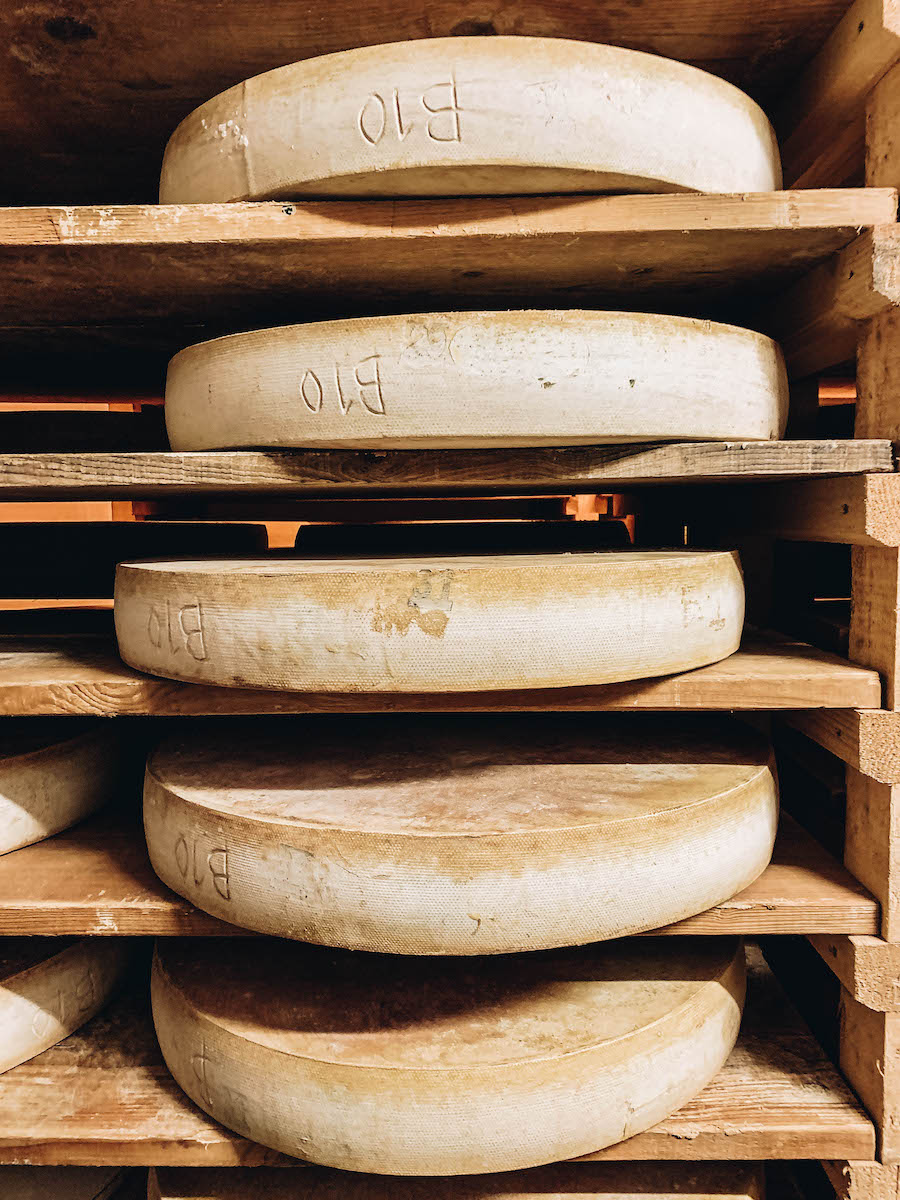 The Jura Mountains of the Franche-Comte Region

Franche-Comte is a rural region in eastern France, sprawling near the border of Switzerland. The beautiful place is dotted with picturesque abbeys, surreal lanes, cascading waterfalls, rolling mountains, and secluded hiking trails. The Massif du Jura is a mountain range that stretches between the departments of Jura, Doubs and Ain. And this is where amazing cheese comes from, a specialty of the region.

The diversity of the landscape, and distinct terroir adds to the unique smell and taste of every Comté wheel that is produced in the area (and no two wheels are exactly alike!). 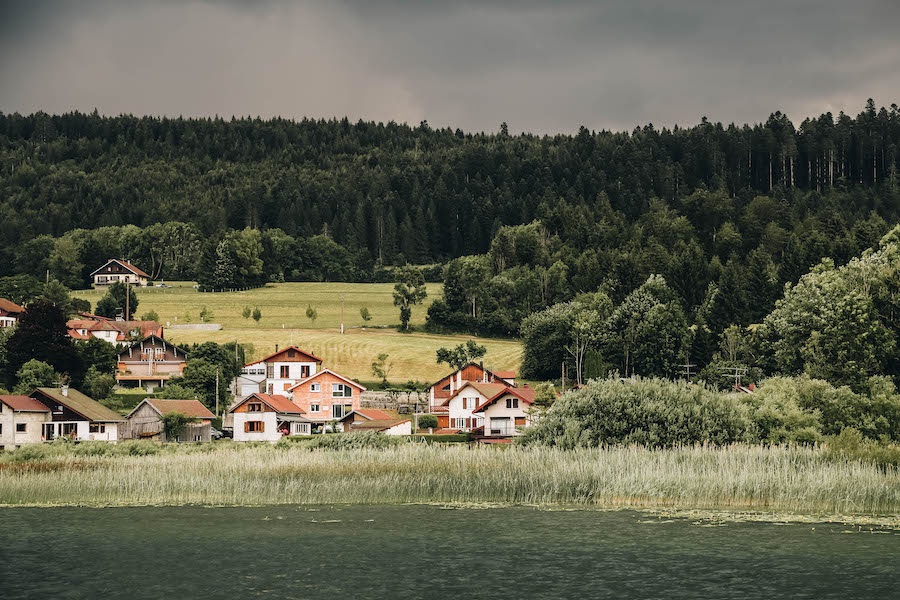 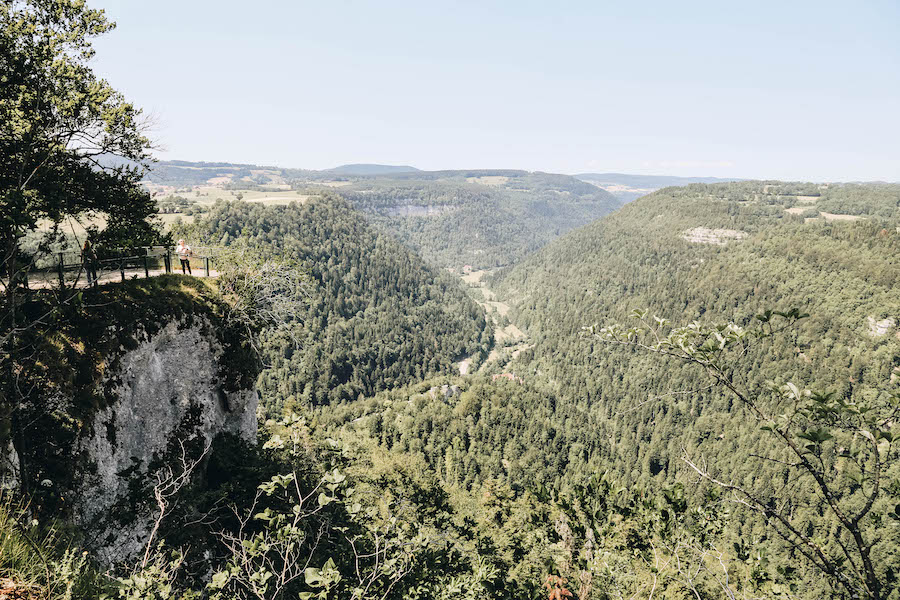 The Les Routes du Comte is a network of farmers, cheesemakers, maturing cellars, museums and craftsmen in the Jura Massif area who welcome visitors to explore the regional specialties. While driving along the route you can stop by a farm to see the milking process, watch the larges rounds of cheese being made at a fruitières, visit an aging cellar to ogle the endless rows of wheels and pop into a lovely restaurant for lunch. No matter what you do, the locals will accept you to the country roads and provide the best gastronomic experience.

The link also brings together the country and tourism by offering unique accommodations, some where you get to stay in quaint ranch houses right on a farm! 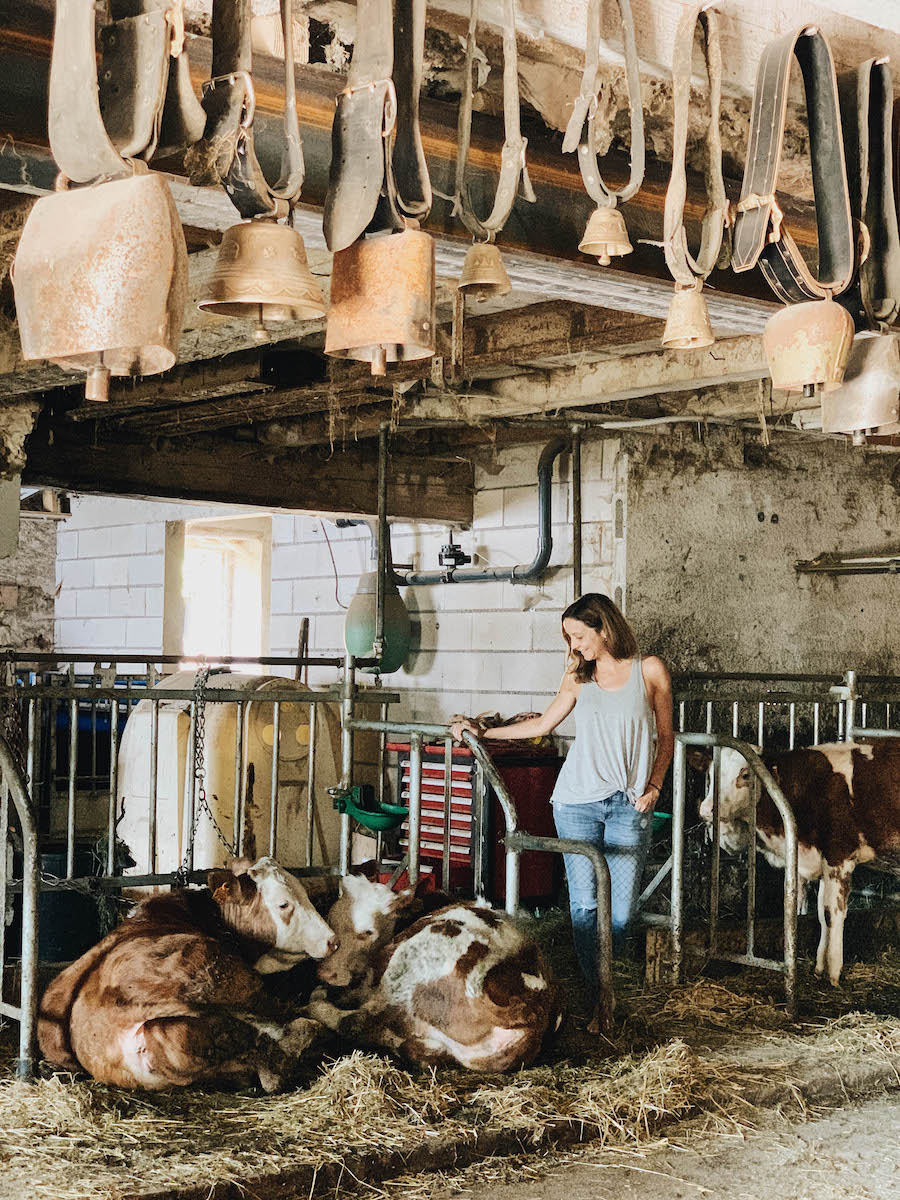 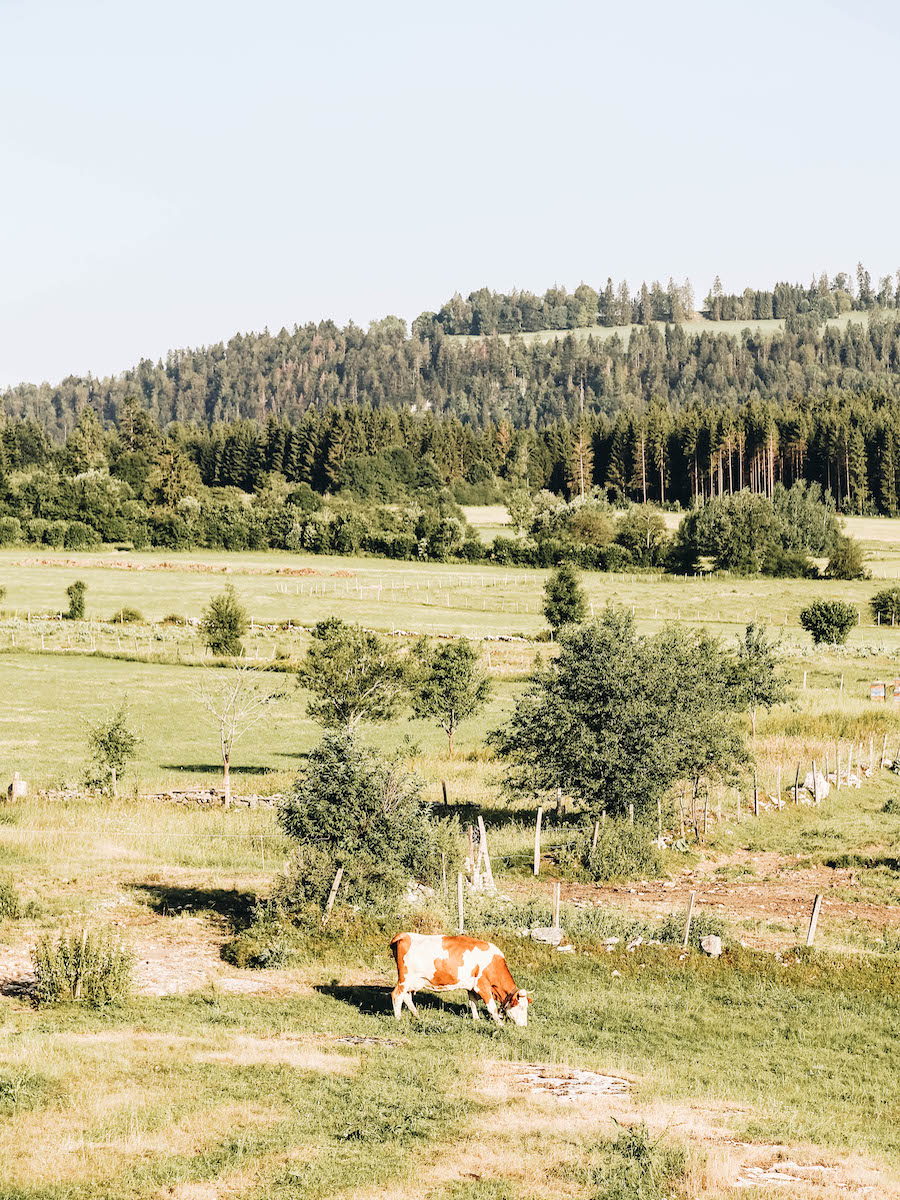 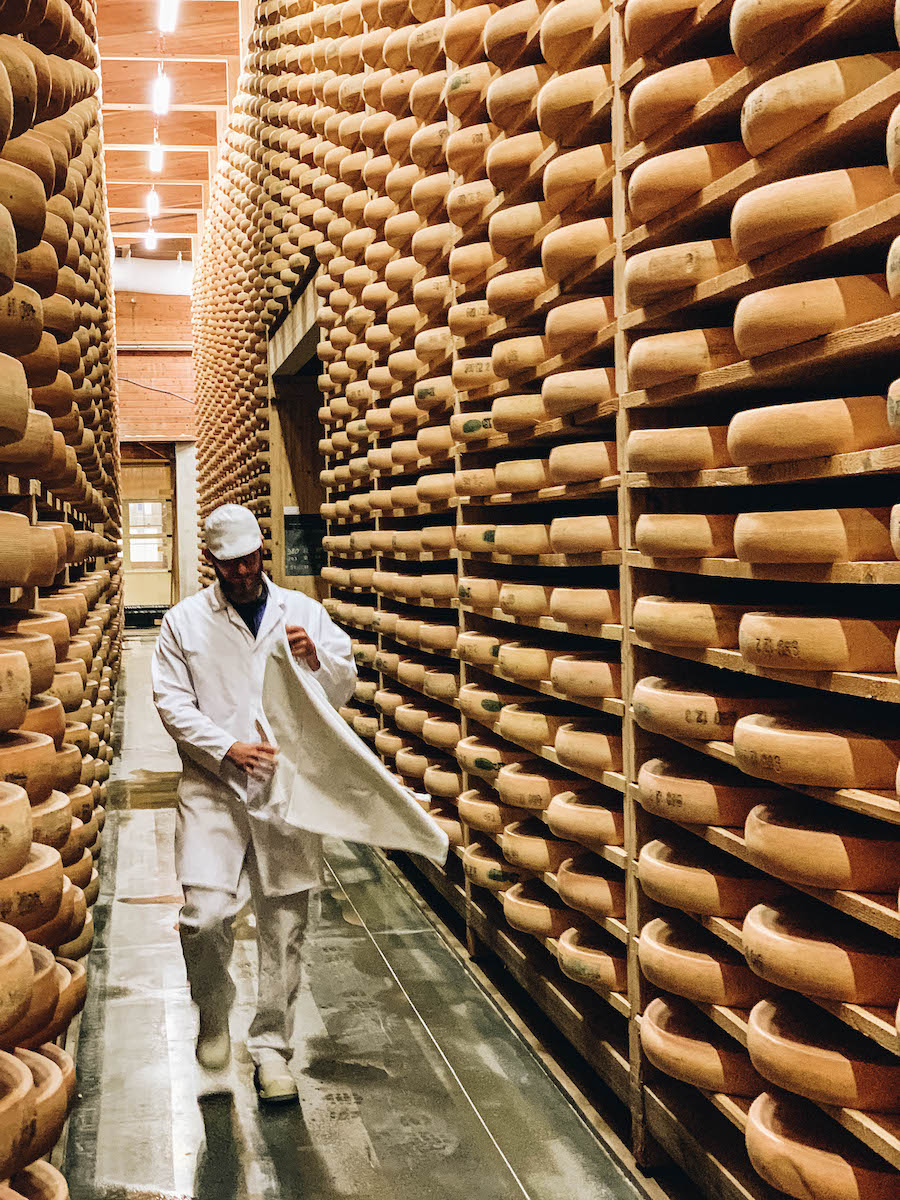 The Process of Producing Comté

Comté cheese has an AOC/PDO designation of origin, which means it can only be produced in a specific region of France (kind of like Champagne can only be produced in Champagne in order to bear that name). The PDO, which spans 3 departments of the Jura Massif—Doubs, Jura and part of Ain, requires strict guidelines for the 2,500 farmers, 150 fruitières and 13 affineurs who have a hand in producing each wheel.

There are around 2,500 farmers that are legally allowed to be a producer of milk for Comté cheese and the PDO has a set of rules that every one must adhere to. For example, the herd of nearly 150,000 cows (95% Montbéliarde and 5% French Simmental), must each have a minimum of 2 acres of land to roam on. That explains why vast open pastures with grazing light brown and white cows are a common sight at Les Routes du Comté!

It takes the milk of 20 cows per day (400 liters!) to produce one 88-pound wheel of cheese, so the milking of the cows is something that’s hard to miss during your visit to a farm. Another rule of the PDO is that the first milk from the cow must be done by hand, which made me happy because this guideline is why at Charbonnel Farm I got to check “milk a cow” off my bucket list.

Cows are milked twice a day and the milk must be made into cheese within 24 hours, so shortly after the farmers milk the cows, it is delivered to the cheesemakers—the fruitières. 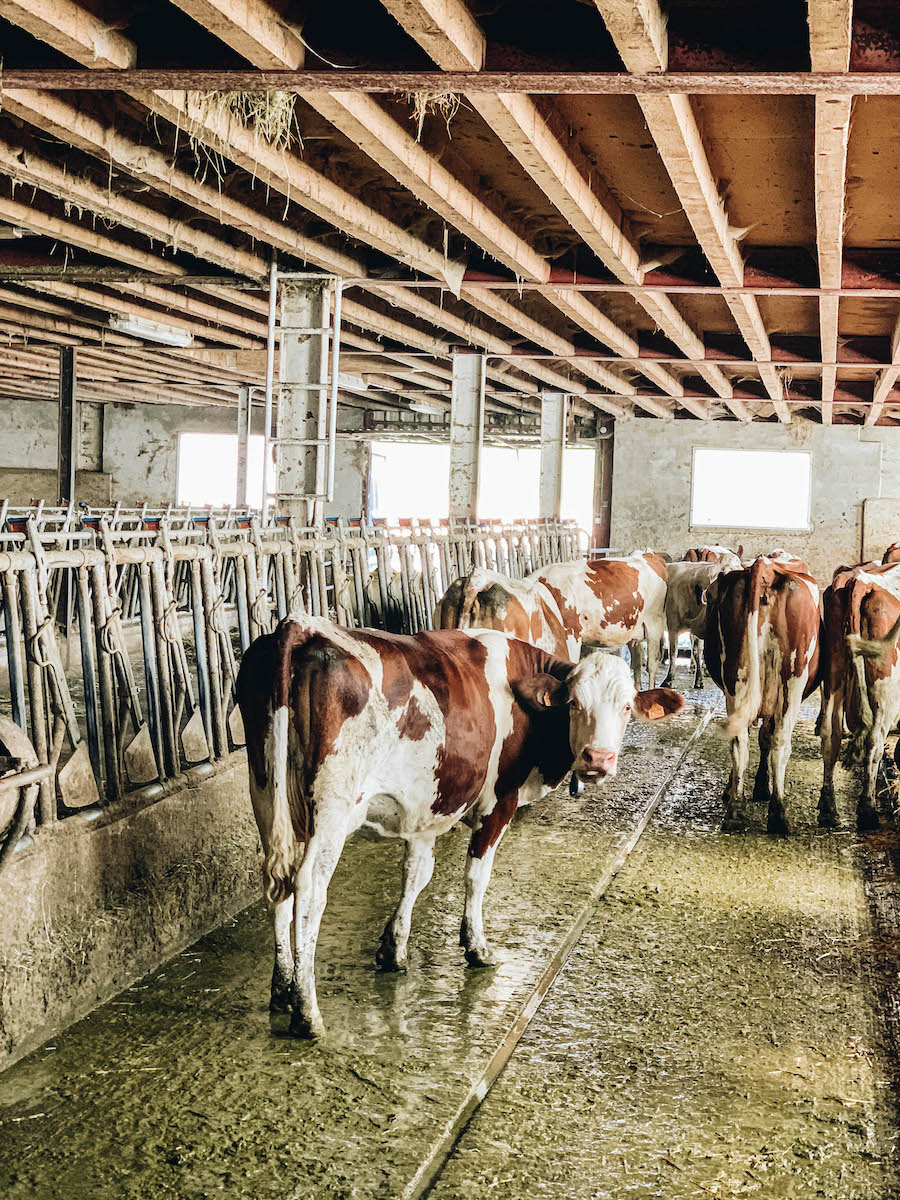 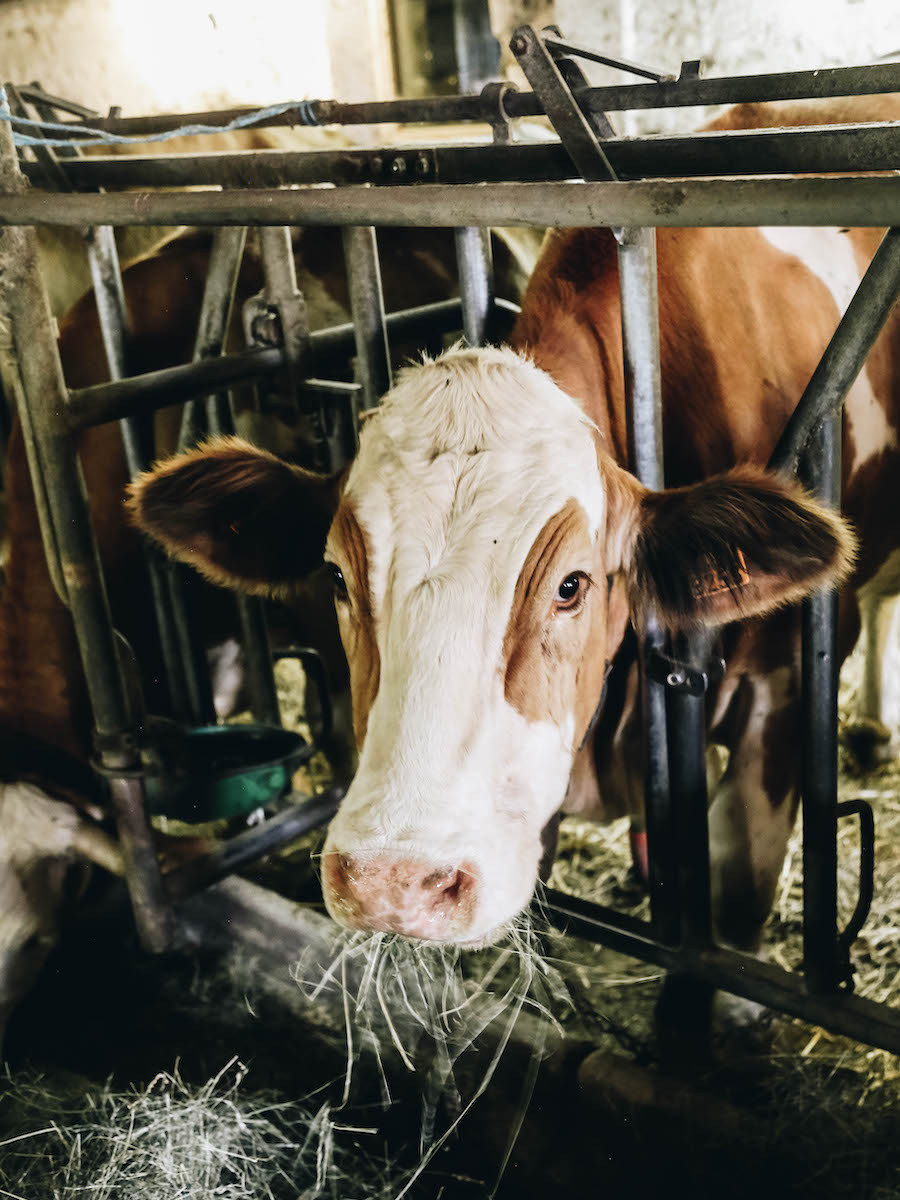 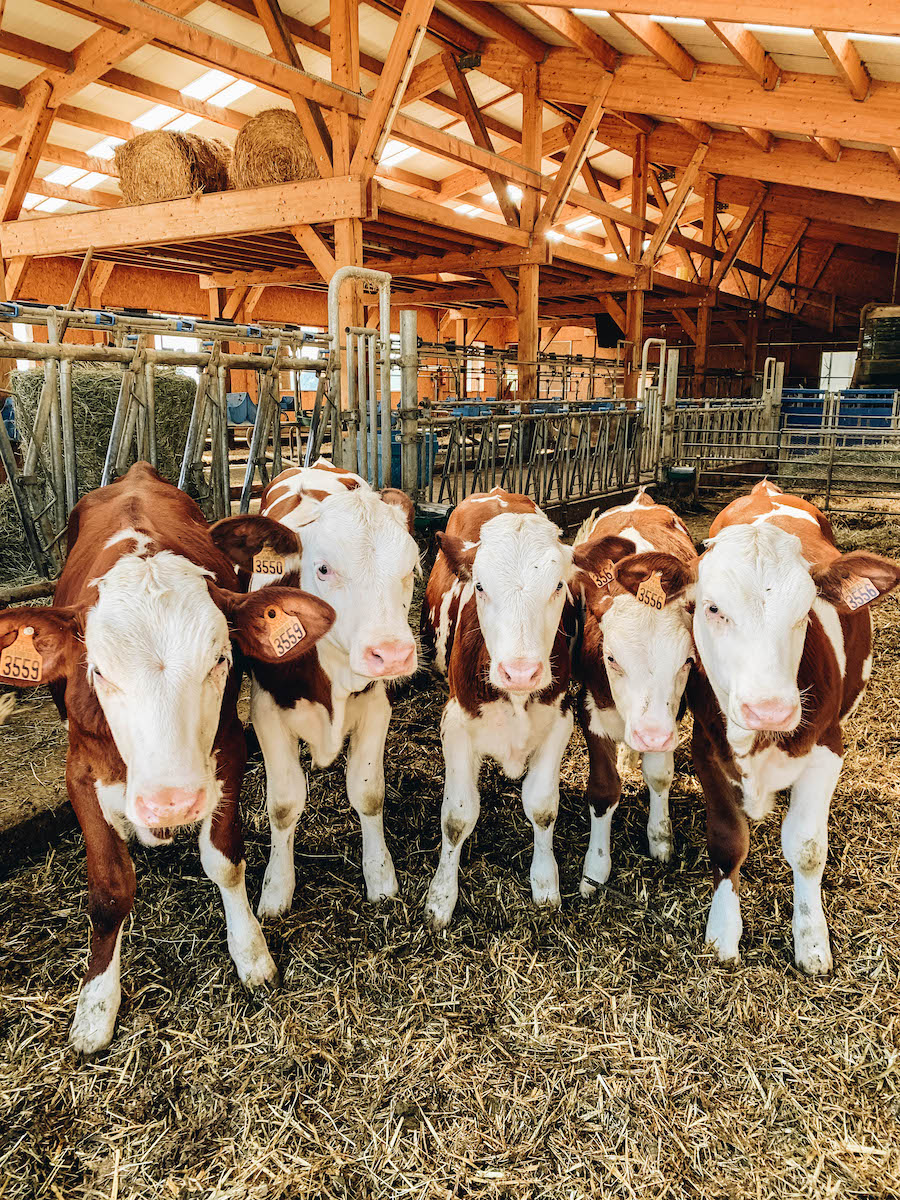 Comte cheese is made every single day of the week (no rest for farmers, producers or the cows!) and at the fruitières is where its done. As sunlight hits the horizon, farmers collect the milk from their cows and bring it to fruitières—cheese-making facilities. The milk is then warmed to 90ºF in humongous copper vats and the cheesemaker adds a few ingredients including natural leavens and rennet to produce curds.

When the consistency is just perfect, he will transfer it to a mould and put a green tag on the rim to indicate where it was made and on what date. The amount of green tags each cheesemaker gets is related to the amount of cows, this is how they can control the market and further create the best product. After the cheese is removed from the mould it may stay a short time on spruce boards at the fruitières, but then needs to be taken to the next specialist in the chain of Comté, the affineur. 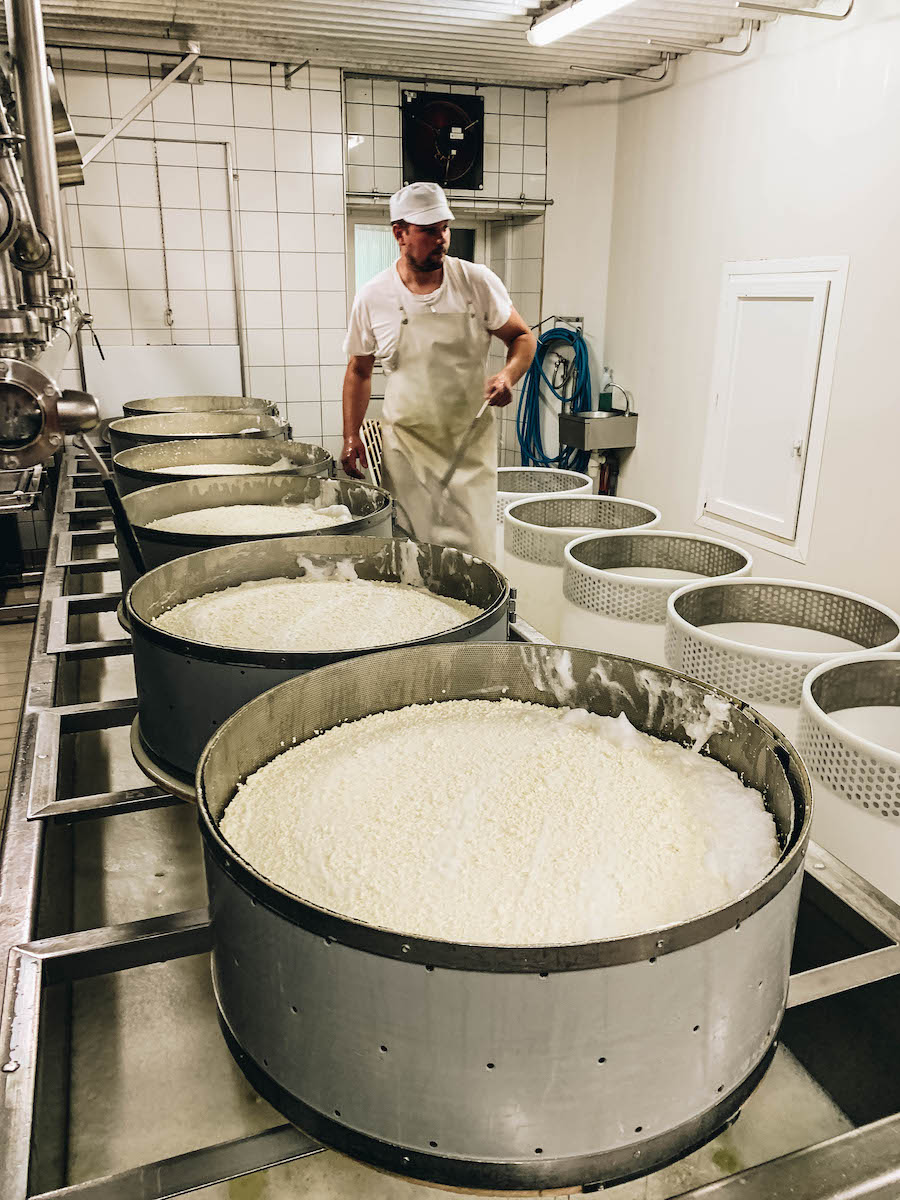 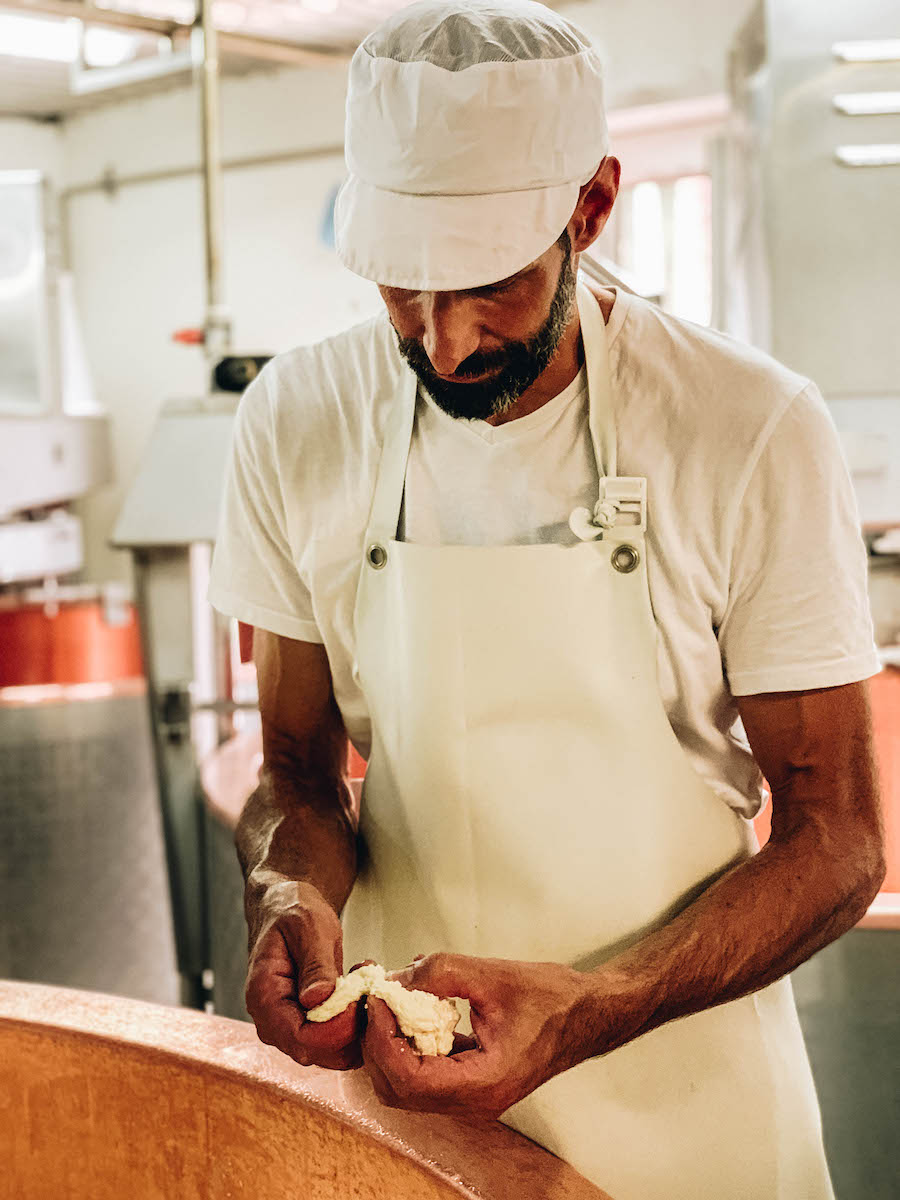 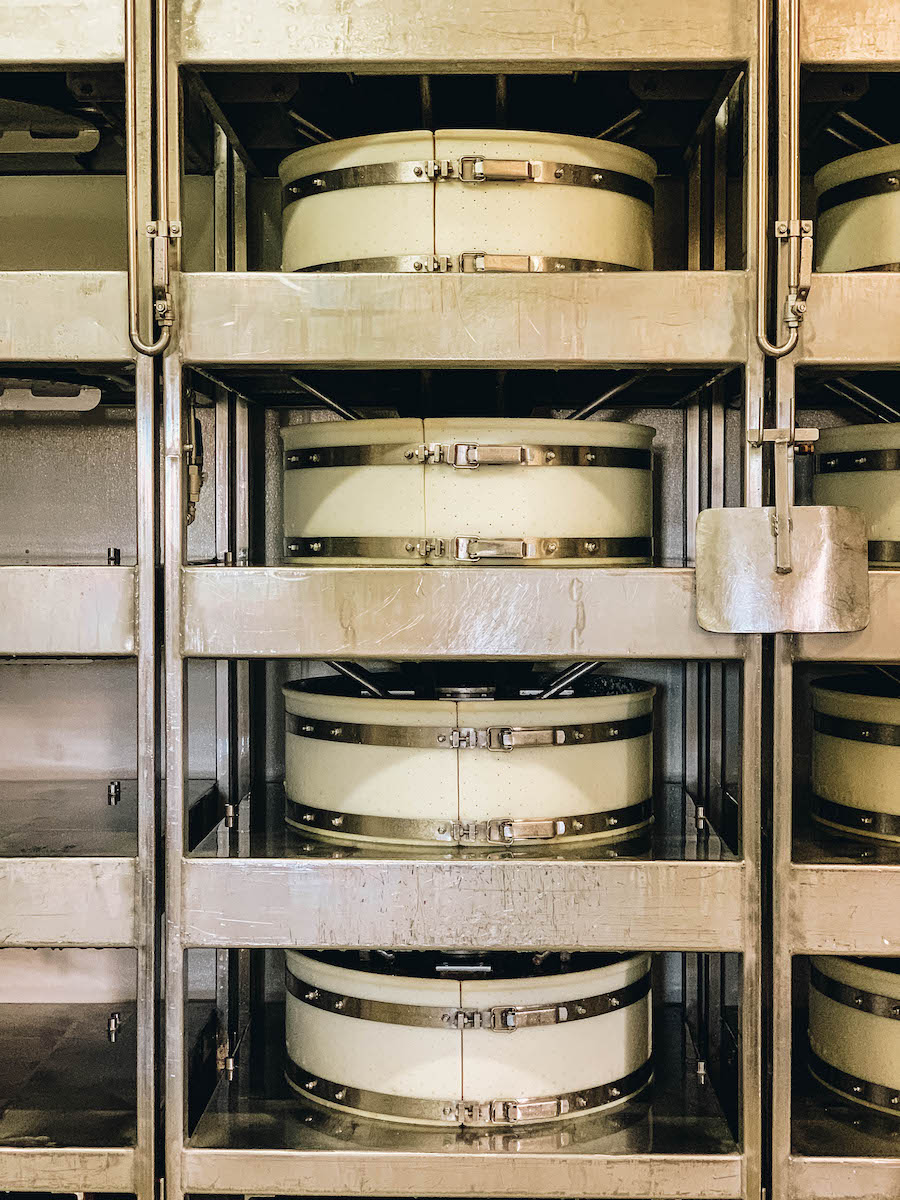 Cheese caves are a little piece of heaven for cheese-enthusiasts. From ceiling to floor, and seemingly never-ending rows, there is nothing but wheels of aging cheese. These caves, called the affineurs, are places where Comte Cheese is stored for the maturing process. The time period can last from merely four months to years (the 18-month aged cheese was my favorite!).

As you step inside the magnificent caves, you will be awestruck by the panorama of cheesy goodness and the delicate care that is taken with every wheel. The cellars are kept at ideal temperatures, as the the master affineur regularly uses a small implement to carefully inspect the sound, smell and taste of the each round. Each wheel also has to be flipped about every other day (remember that they are almost 100 pounds!?!). Some of the larger affineurs may have a machine that will do this, but others do it by hand—what a workout.

I took a tour of Marcel Petite, cellars of Fort Saint Antoine. Located at the height of 1100 meters and in the heart of Jura Mountains, the ripening cellars set in an old military fort contains thousands of cheese wheels. 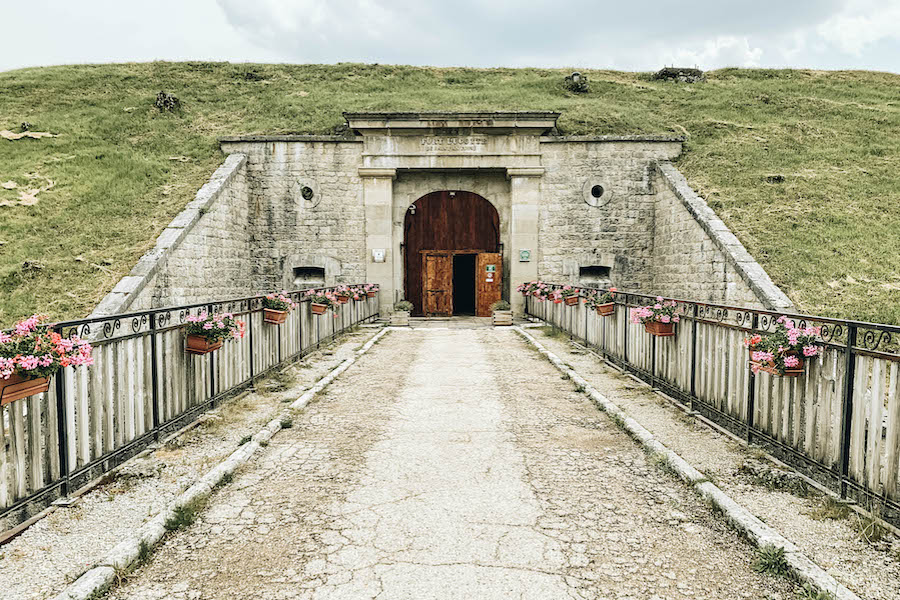 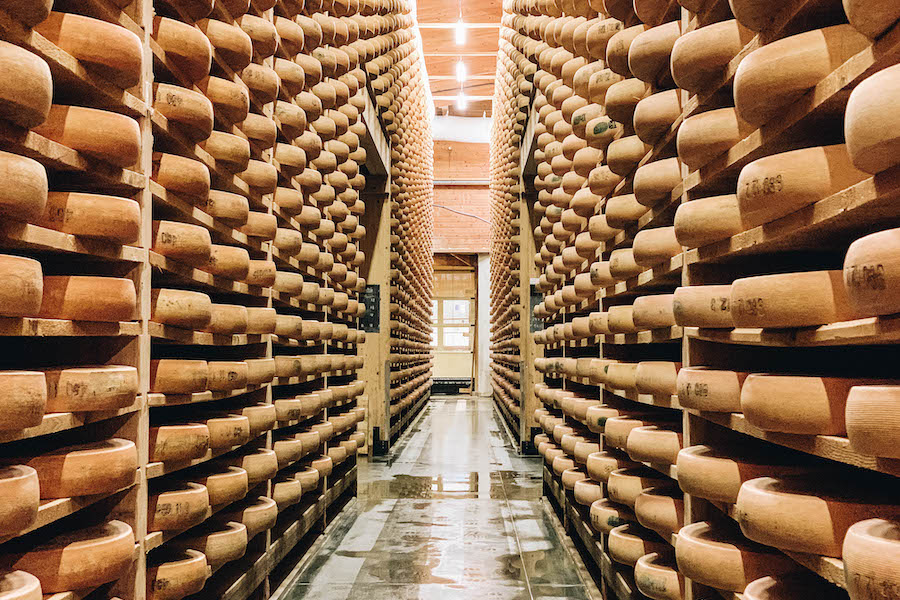 A Taste of Comté Along the Route

On the Les Routes du Comte you will have plenty of opportunity to sample the cheese at different ages. But, to explore the versatile flavor even more, visit some of the restaurants in the area to see what their chefs are doing with the delicacy.

There are dozens of delicious eateries, but two of my favorites on the route were Petite Echelle and L’Anversis Table de Montagne. Petite Echelle is an inn with a cozy indoor restaurant and a few picnic tables outside. Comté cheese fondue is the specialty here—don’t miss it! L’Anversis Table de Montagne is a artsy place whose menu is written on a chalkboard daily. Whether it be a tartine or crusted sweetbreads with cheese sauce, there’s almost always a dish with Comté featured here. 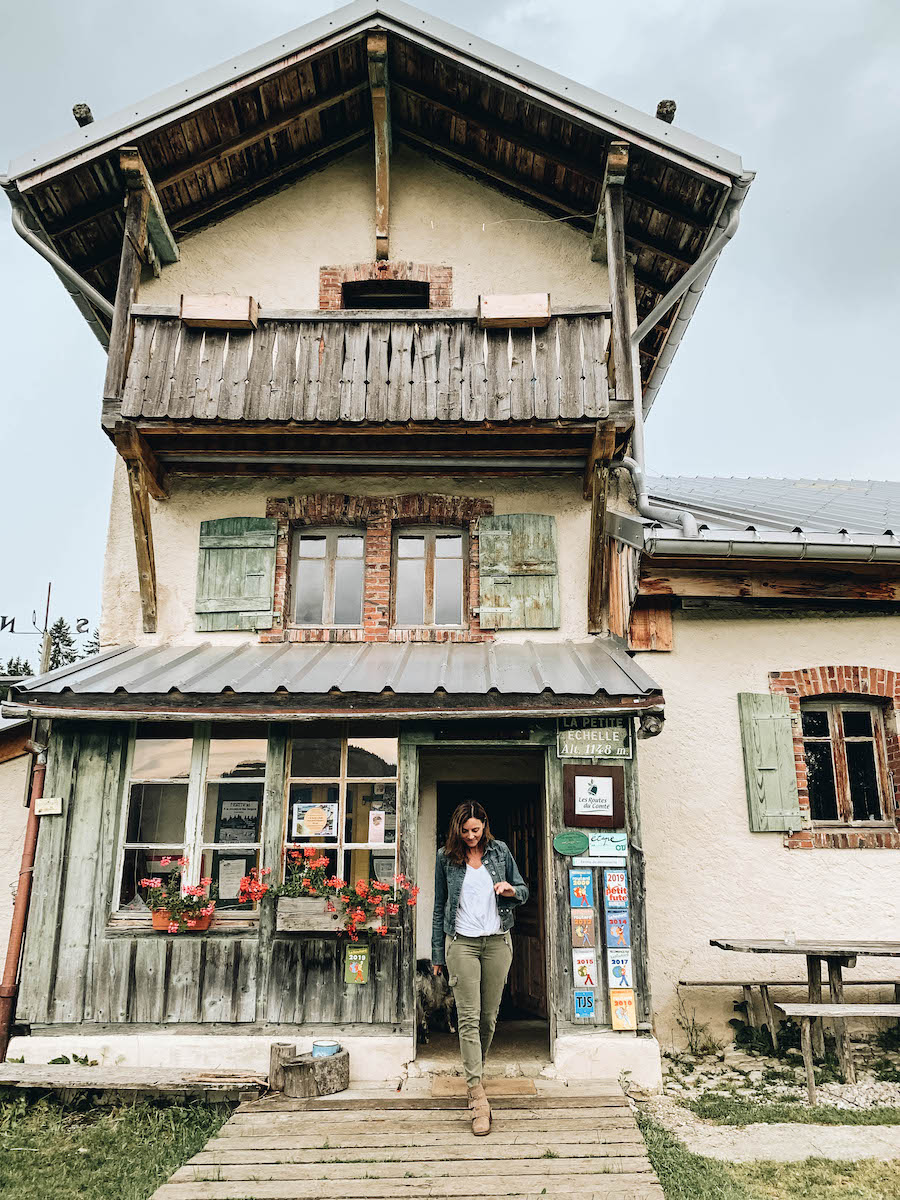 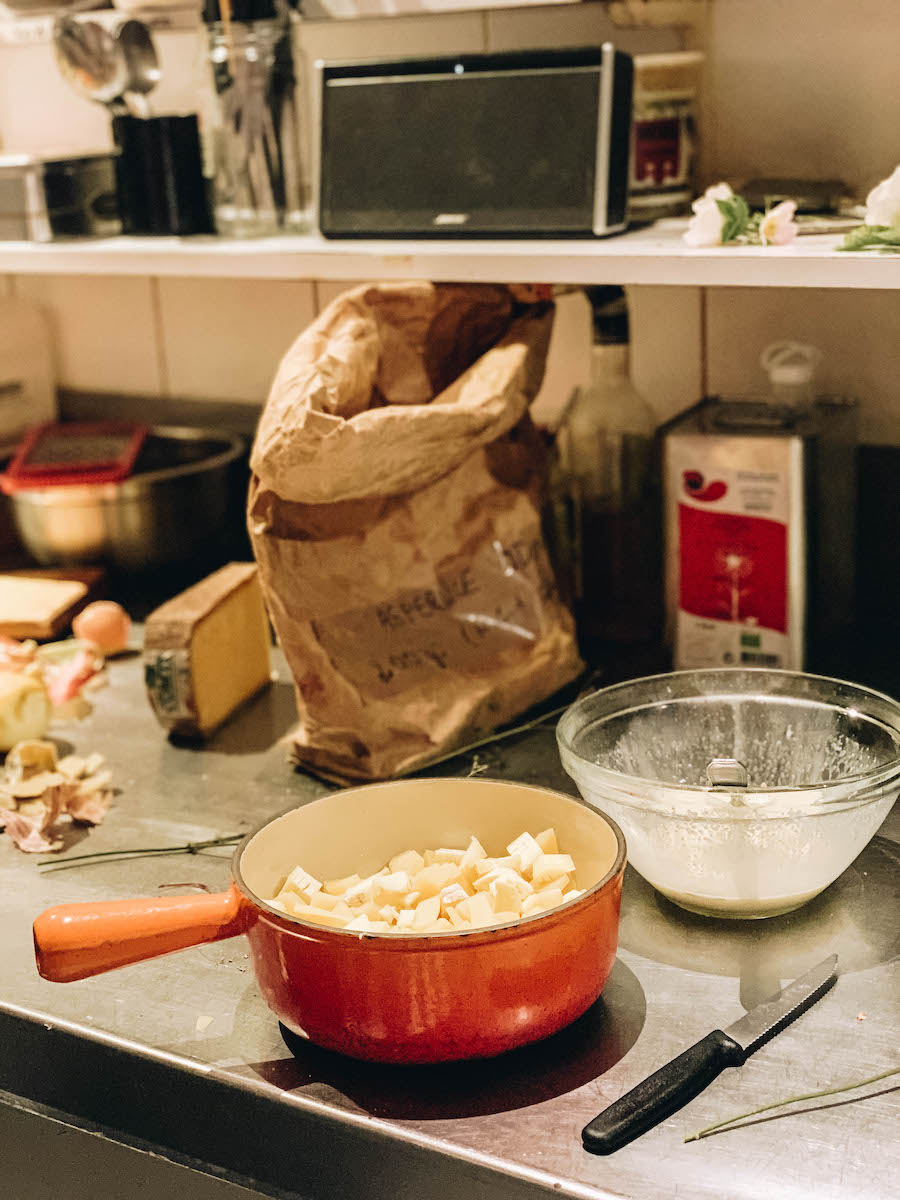 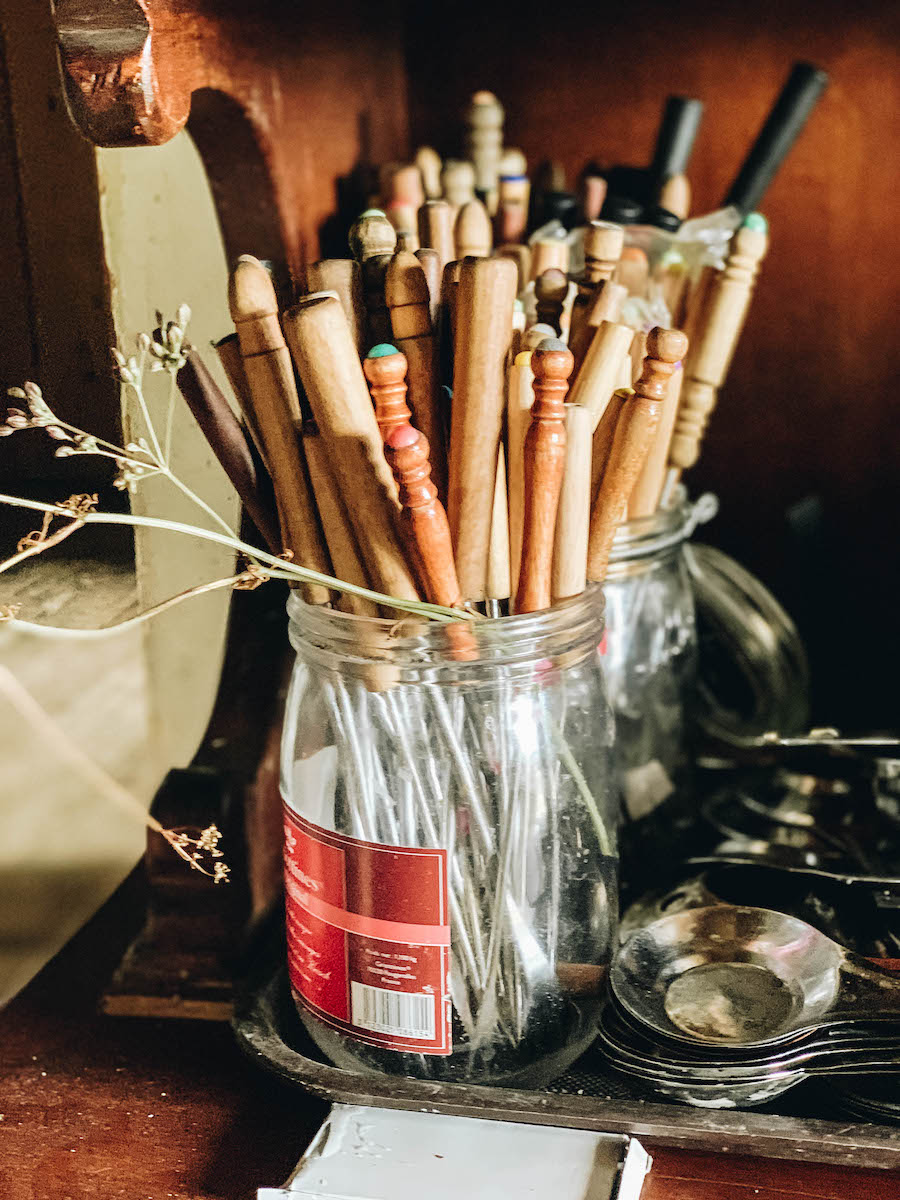 You can lust for a cheese, but when you follow the process from farmer to cheesemaker to master affineur, you can truly fall in love. Comte is a cooperative effort of some of the most passionate people in France who produce it with love and care. This has to be very reason that is tastes so good.

Planning: The Les Routes du Comte can be difficult to navigate (especially if you don’t speak French!), so it’s best to do your research beforehand. Plus, contact the CIGC and tourism boards for more information and help with arranging the perfect stops for you.

Getting There: Geneva airport in Switzerland is actually the closest major airport to the region and most airlines will fly into it. You can easily check for the best fare deals at Skyscanner, which also has the option to choose ‘cheapest month’ as the departure to find the lowest priced dates to fly to your destination.

Where to Stay in Franche-Comté Region: L’Hôtel du Coude (moderate) is a family run inn that dates back to the 16th century and has a very good restaurant onsite (try their La Croute aux Morilles!). L’Etang du Moulin Hotel & Restaurant (luxury) is a trendy place whose artwork throughout will keep you entertained. The onsite restaurant is ran by award-winning chef Jacques Barnachon who serves up dishes that rival the artwork on the walls. L’Hotel Arbez Franco-Suisse straddles the France-Switzerland border and is the perfect spot the night before a flight. Or search some great deals on hotels of your choice at Booking.com. If you’re looking for more of a home atmosphere (or are traveling with a group of people), head over to Airbnb that has houses, apartments and even just a room for rent in every price range..

Getting Around: Renting a car at the Geneva airport is the best way to really experience the area and RentalCars.com has some great deals.

Insurance: It’s always a good idea to travel fully insured so you are protected in case of trip cancellations or medical emergencies. You can check out pricing at Travelex Insurance.

Bucket List Itinerary: 12 Hours in Lyon, France
See the Carrières de Lumières Art Show in the South of France
Learn the Art of Making French Macarons in Paris
Get Spooked at the Catacombs in Paris