Learn to Make Pierogi in Poland

Most folks don’t realize, mostly because my husband and I own an Italian restaurant in Northern California, that I am actually only of half Italian decent. My other half is full-on Polish. Being surrounded by ravioli, bruschetta and tiramisu (one of the best foods in the world!)  while growing up had left me lost when it came to my knowledge of Polish cuisine.

I can easily whip you up a butternut squash risotto or linguine with clams, but if you ask me to make barszcz or sernik, I would be completely lost. So, when the opportunity came to learn how to make a traditional Polish dish while in Warsaw, I jumped at the chance.

I was going to learn how to make pierogi in Poland. 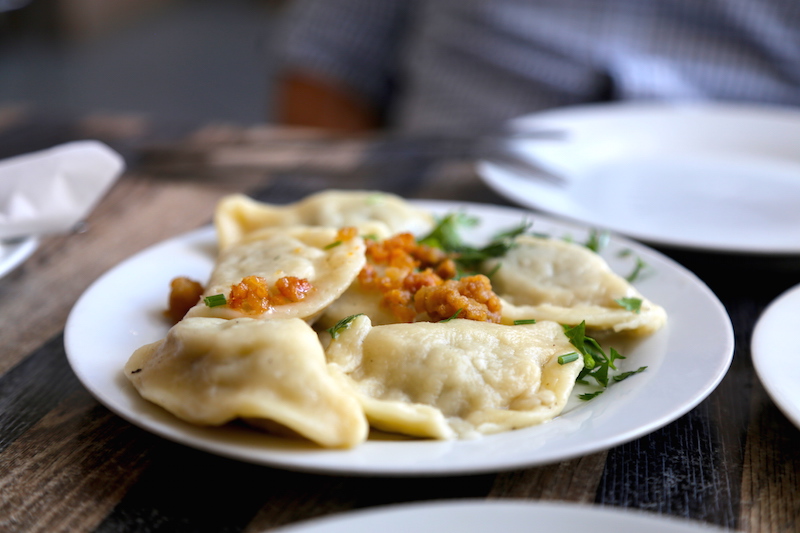 Traveling to Warsaw was going to be an cultural experience on so many levels, but I didn’t know that learning how to cook a piece of my heritage would be one of them. Hurrah to unexpected and tasty food experiences.

Our pierogi class was being taught by Michal of Polish Your Cooking. This is him. Cute, no? And he can cook.

I was ready to learn. 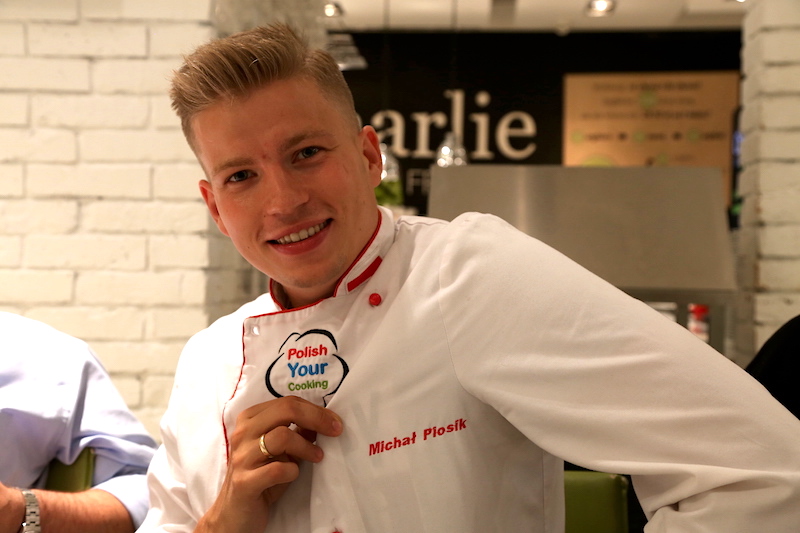 Immediately when we arrived, before we even started cooking a thing, appetizers lined the table: beetroot, blood sausage, pate, head cheese, ham, kielbasa, etc… To top it off, while noshing on our local charcuterie and such, cherry vodka was served.

I like the direction this cooking class was heading. 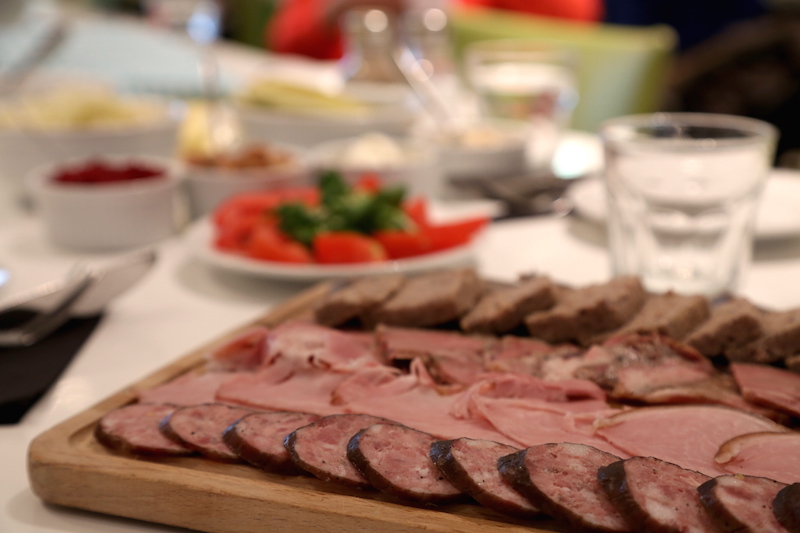 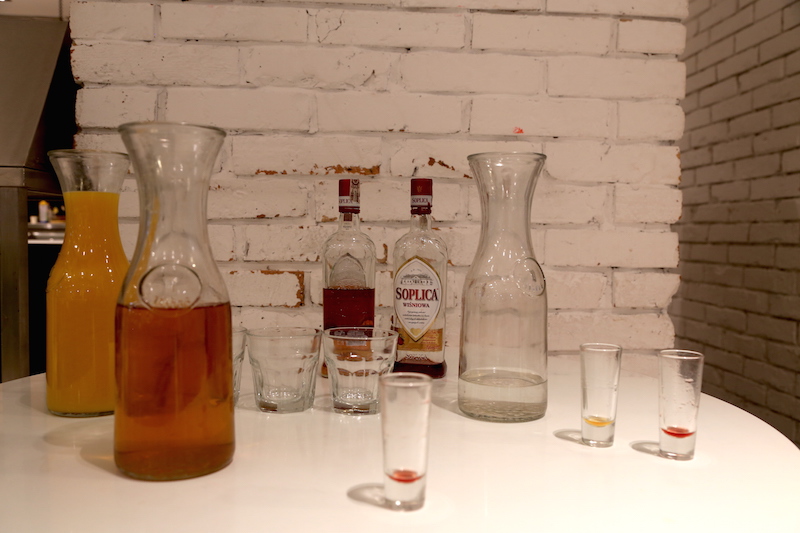 After introductions, appetizers and a light vodka buzz it was time to start cooking. We couldn’t just drink vodka this entire class. Could we?

Pierogi is a dumpling typically filled with either potato, sauerkraut or meat and then topped with sour cream and bacon. These Polish pillows are the national dish and have been made in Poland since the 13th century.

We would be making two types of pierogi today, meat (pork & beef) and potato. 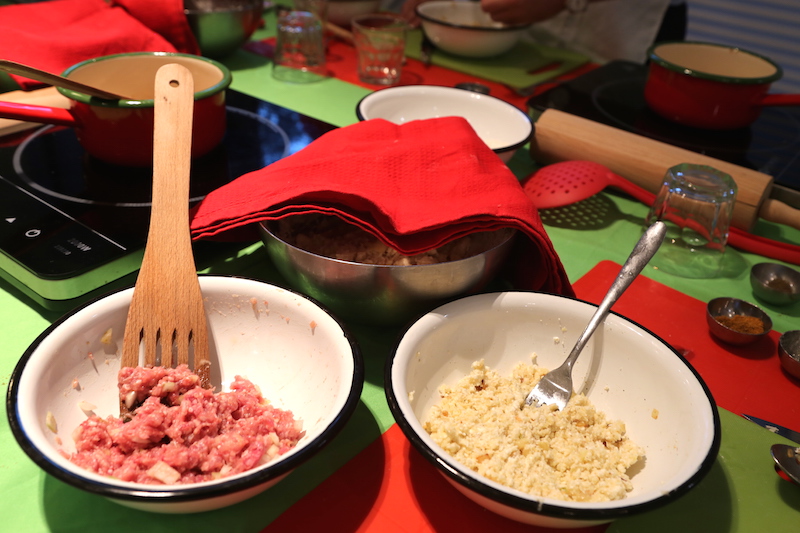 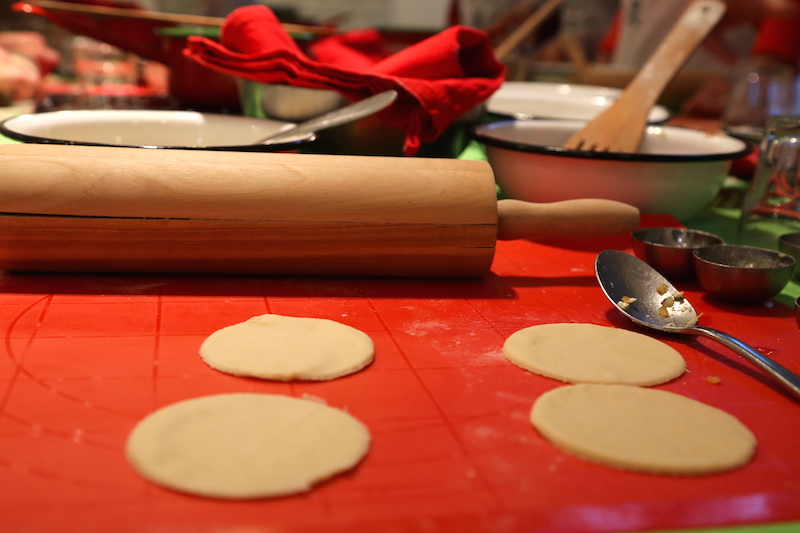 Michal walked us through making the dough as well as each filling. Though he gave us excellent guidance, we were responsible for the work, which is an aspect I love about a cooking class. Don’t just show me, let me do it myself.

We rolled out our dough, using a glass to make the circular base for our filling. Our teacher then showed us how to probably pinch the edges to secure the filling and give our dish a decorative flair. And he gave us a shot of quince vodka while we were laboriously pinching. Two shots down…and counting.

My very first ever pierogi were ready for the pot. 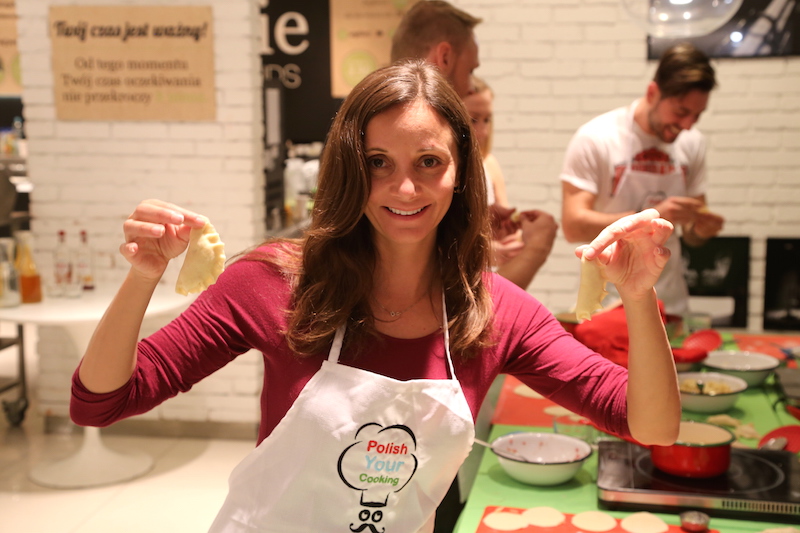 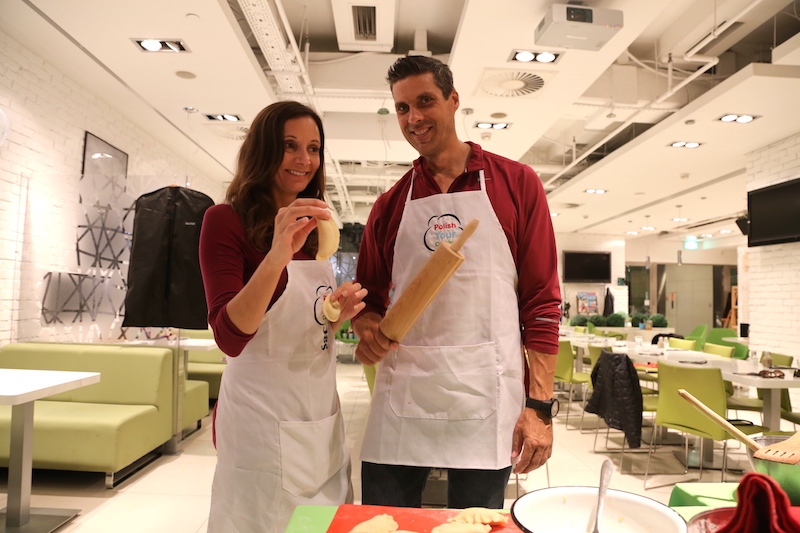 Peter and I plopped our pierogi into a pot of boiling water. It only took a few minutes before they were floating to the top, indicating they were ready to be dressed and eaten. 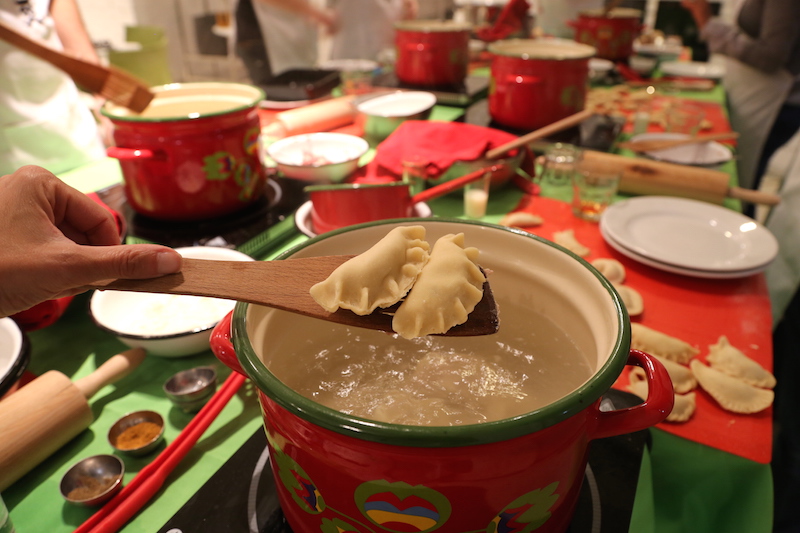 We sat at the table a half dozen other students. Condiments and side dishes were already waiting for us; pickled herring, oscypek (smoked sheep’s cheese), pork lard and more charcuterie. And, of course, another vodka. This time is was hazelnut, which were instructed to drink half of then fill it with cream to drink the rest. That makes three shots so far, if you are keeping track.

We topped our pierogi creation with bacon, sour cream and parsley.

It was time to sample. Delicious.

My favorite one was my own creating where I mixed the potato and meat together to form one perfect pierogi. 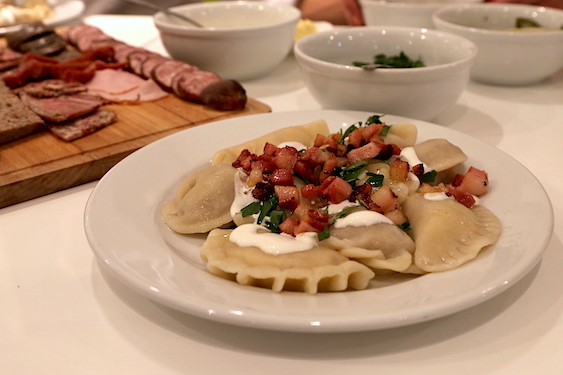 Towards the end of our dinner a bitter stomach vodka was served which was said will help digest all the amounts of pierogi we just ate. 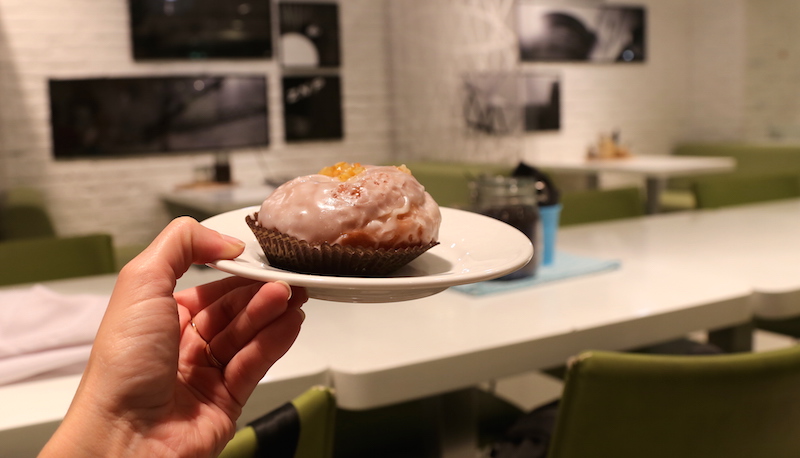 Polish Your Cooking couldn’t let us leave without partaking in a traditional Polish Dessert, Pączki – a donut filled with rose jam. The evening or dessert wouldn’t be complete unless they end us with one more shot, a bison grass vodka. That makes five. My stomach is full and I’m feeling no pain.

My trip to Warsaw was hosted by Fall in Love With Warsaw, but all opinions are my own.