Eat a Greek Salad in Greece

I have eaten plenty of versions on an Americanized Greek Salad where the ingredients were mixed in, or layer on top of, an assortment of leafy greens. And they were pretty delicious.  But, it wasn’t until actually traveling to Greece that I was introduced to the traditional Greek food and delicious renditions of this dish. And there has been no turning back ever since.

A Greek Salad in Greece is typically made with tomatoes, cucumbers, onion, feta cheese, kalamata olives, oregano and olive oil.

Did you notice that there was no lettuce listed in the above ingredients? That’s because in Greece that’s not how this dish is made. But, who needs it? In most cases I’d rather have all the goodies in a salad, minus the filler greens anyway. Unless, it’s kale. I love kale. But, that’s a different story. 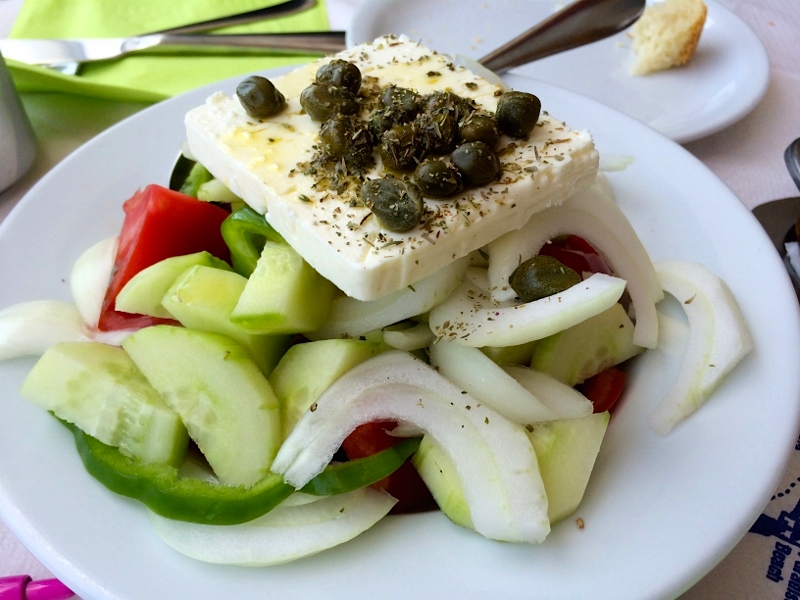 Checking “Eat a Greek Salad in Greece” off my bucket list was one of the easiest things to do once I was actually in the country, just about every restaurant offered their own variety.

My very first experience happened within an hour of arriving in Thessaloniki. The Hyatt Regency offered a welcoming salad that had all the traditional ingredients, plus a sprig of rosemary and rings of green peppers on top. 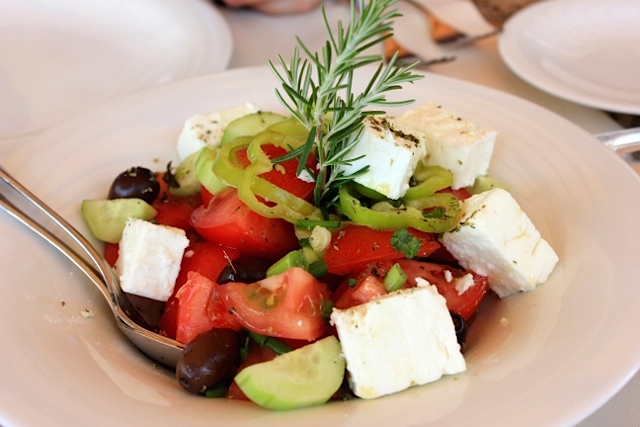 Though I did not see any rosemary after this initial greeting, green peppers were an addition to a few of the following Greek Salad food experiences.

At Taverna Aeolus in Santorini the green bell peppers were cut in strips and mixed with the other vegetables. 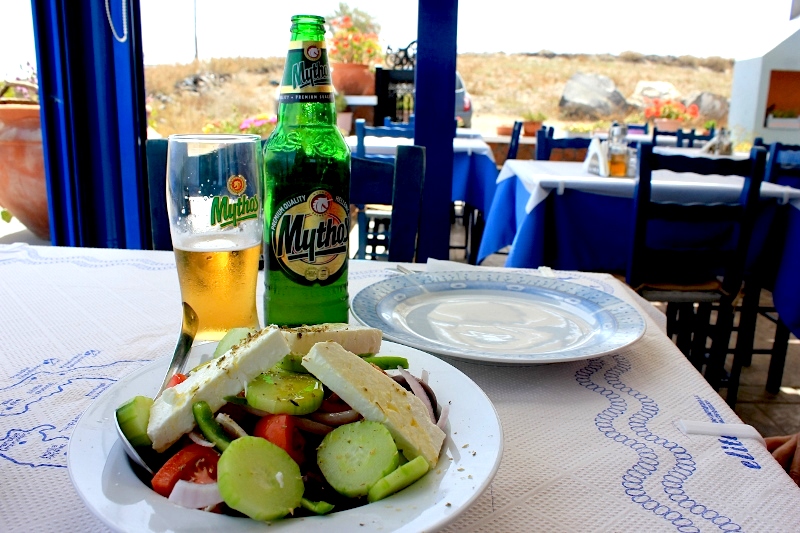 Lotza Restaurant, in the charming town of Oia in Santorini, also had green peppers, but they added some juicy, fat capers on top. Nice addition.

This may have also been the prettiest presentation of them all. 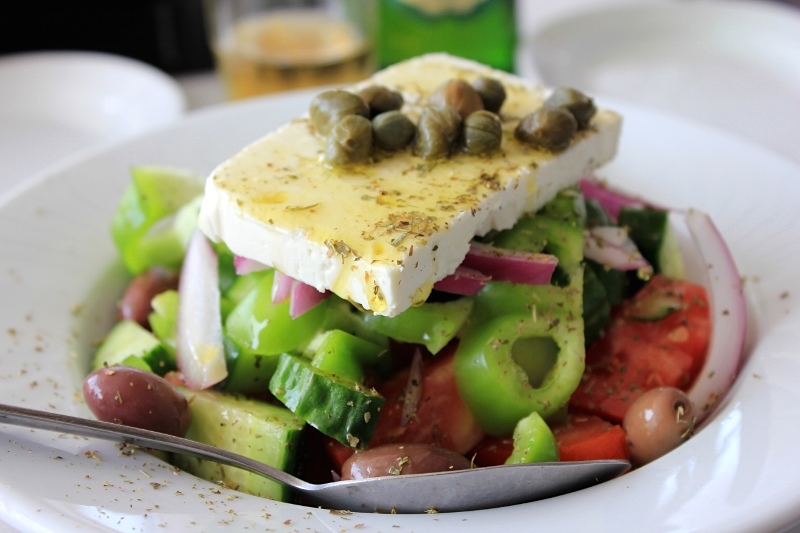 Xamintie in Thessaloniki mixed up the minor green pepper trend, by throwing red ones in there instead. Very clever. 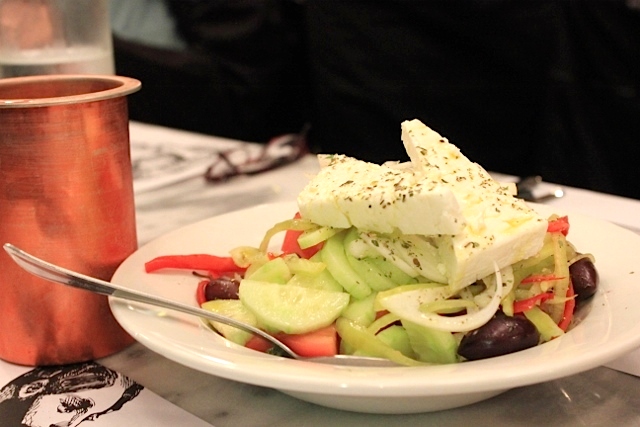 There were two instances where a little American flair was added to the Greek Salads.

After learning how to Greek dance at Athena Palace Village, they served us the traditional salad sprinkled with a dozen arugula leaves.

The peppery flavor of the lettuce was a nice inclusion. 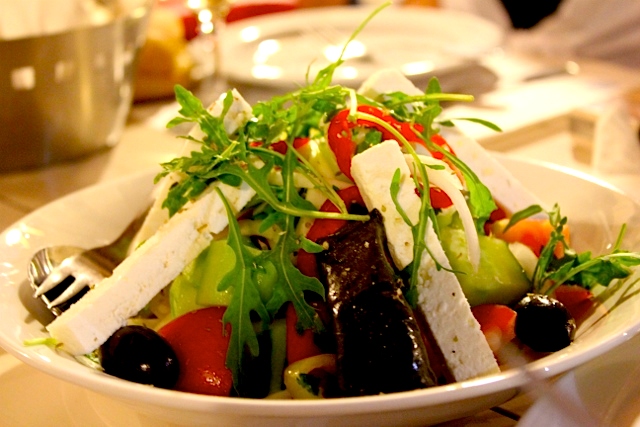 At Elkies restaurant in Halkidiki they garnished the dish with one green lettuce leaf.  I ate around it.

What also made this one different is the crunchy croutons tossed in the mix. I ate all of those. 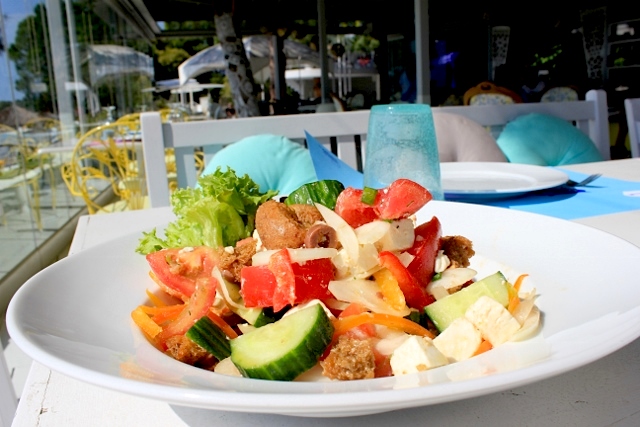 Have you had a Greek Salad in Greece? Which version would be your favorite? What do you consider the best food in the world?

Santorini Bucket List: 18 Things To Do
29 Traditional Greek Foods You Must Eat in Greece
See the Mount Athos Byzantine Monasteries in Greece
Take a 4×4 Jeep Adventure Through Central Greece
See a Movie at an Open Air Cinema in Santorini
Eat a Greek Salad in Greece
5 Greek Islands You Should Definitely Explore This Year
Have a Romantic Sunset Dinner Overlooking the Santorini Caldera