Sometimes driving is the best way to experience a destination. It gives you the opportunity to make stops where and when you want, instead of just looking at them from the window of a tour bus. This was very much true on my flexible self-driving tour of Nova Scotia (including Cape Breton Island!) with Canada by Design. It  gave me the opportunity to explore the province and drive the Cabot Trail at my own pace, getting into the nooks and crannies of this breathtaking Canadian region.

Driving the Cabot Trail is way better than doing it on a tour bus! 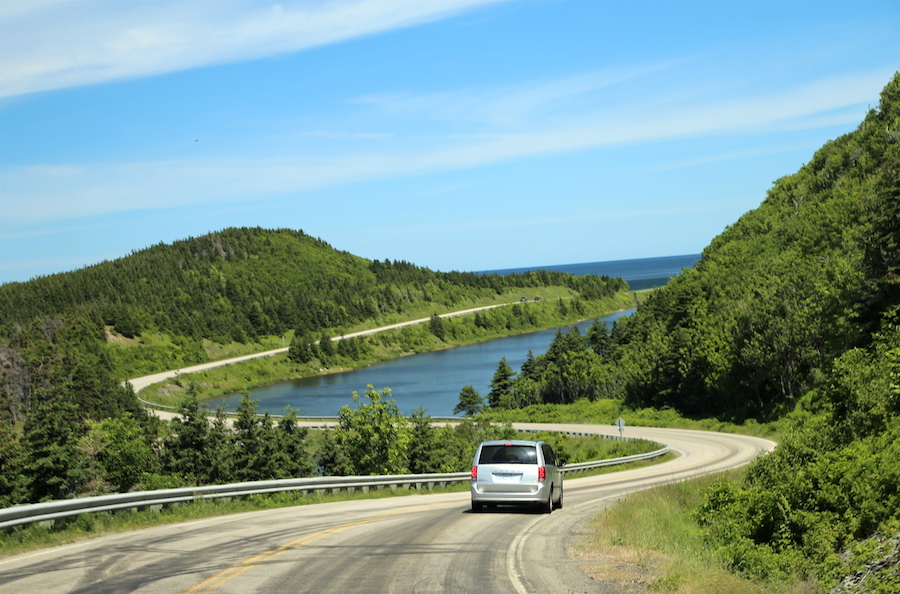 The loose and adventurous itinerary that they created led me far to the Northeast, to Cape Breton Island for a drive unlike no other. The Cabot Trail is a 185-mile driving loop that has picturesque lookout points, miles of hiking trails, lush forests and 360 degree beauty, plus quaint crafty shops, harbors and delectable fish eateries.

Many folks travel to Nova Scotia just to take this drive, making it a 3-4 day vacation. But, we were going to be adventurous and do it all in one day, just like when we made the 17 stops on Maui’s Road to Hana in 9 hours. 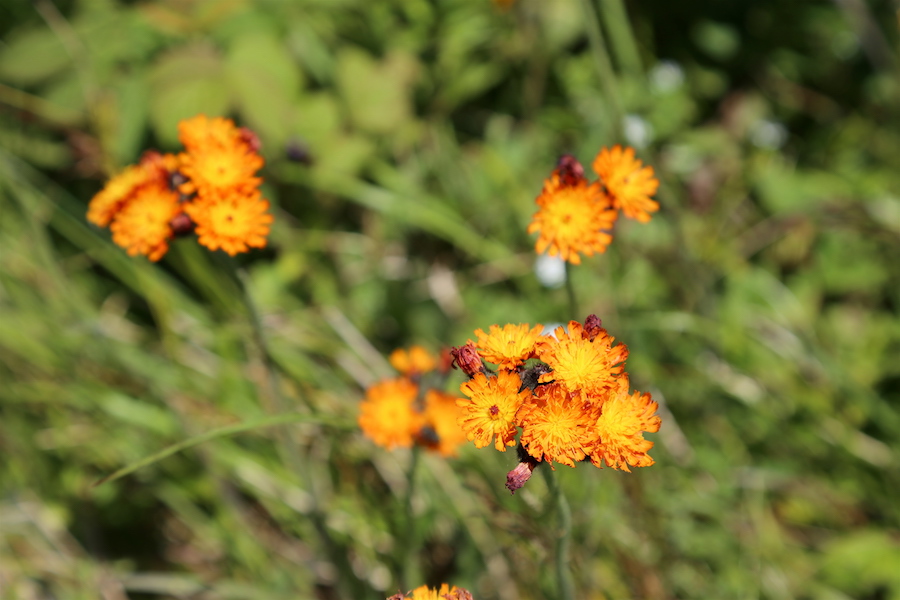 It’s a debatable dilemma. Driving counter-clockwise will allow you to be shore-side for much of the time hugging the shoulder, whereas clockwise will not give you the jitters from the sheer drops on the edge. The choice is really up to you. We started at 9:15 in the morning and went clock-wise, a decision that was made mostly because I wanted to make a special breakfast stop and that was the direction it was in.

We started our ten-hour journey at Red Barn Restaurant, a popular restaurant and gift shop in Baddeck. We skipped dining here, because I already had my heart set on our first stop. 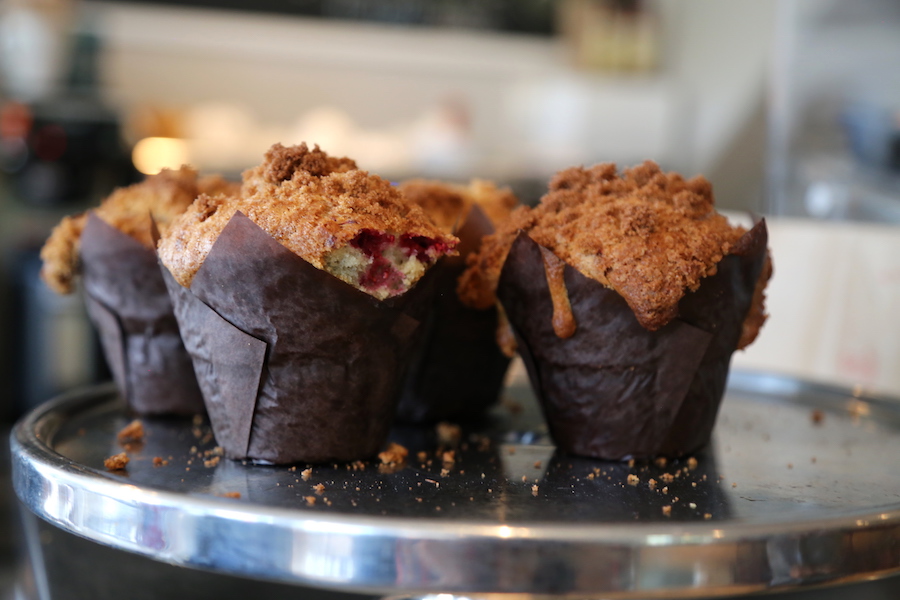 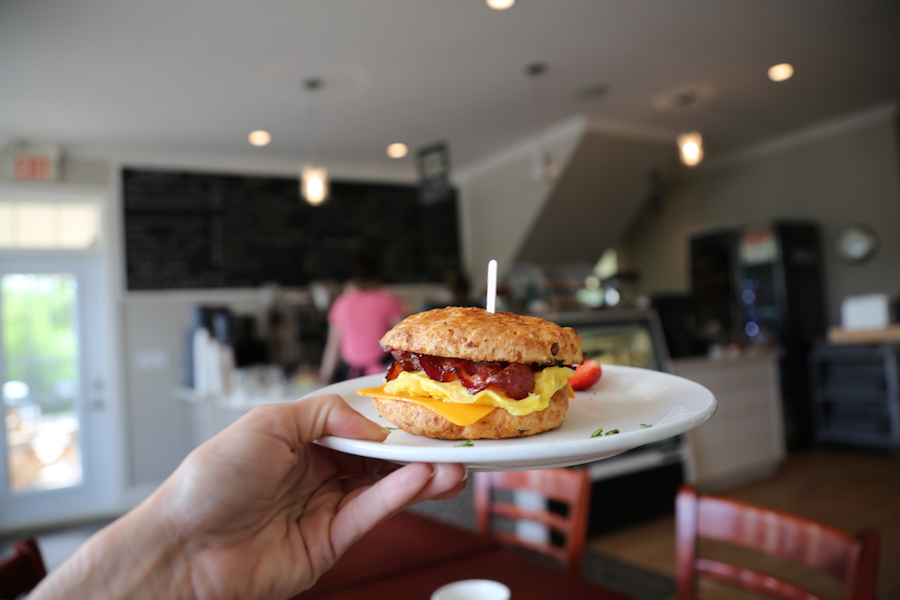 After reading about their fresh-baked muffins and cappuccinos, I knew the first stop on the Cabot Trail would be for breakfast at the Dancing Goat – try one of there fresh baked muffins or a breakfast sandwich made with a hot-from-the-oven buttermilk cheese and onion biscuit. Make sure to pick up a bag of homemade cookies (snicker doodles or ginger sparkles) for the road. 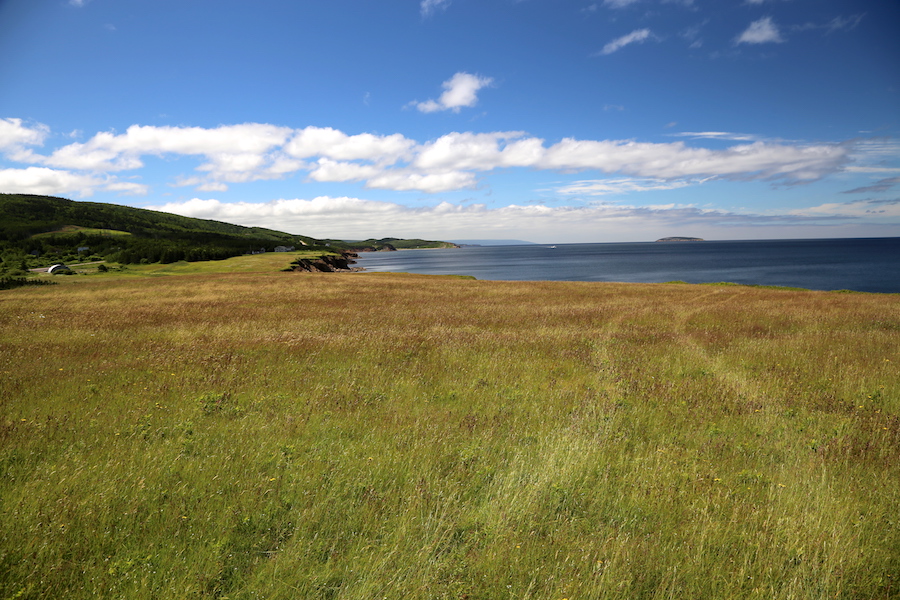 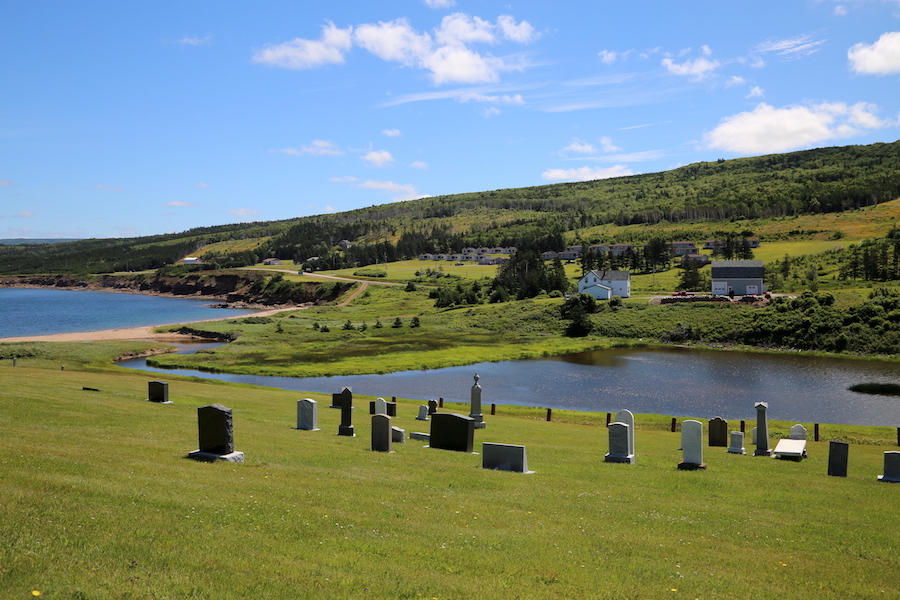 If you blink you’re going to miss the turnoff for this Cabot Trail stop which close to Margaree Harbour. Keep your eyes open for a small sign on the left. The quaint cemetery at the end of the road is only one aspect to this stop. Take a peek to the left to get a beautiful view of the blue waters below—and a chance of spotting a whale!! 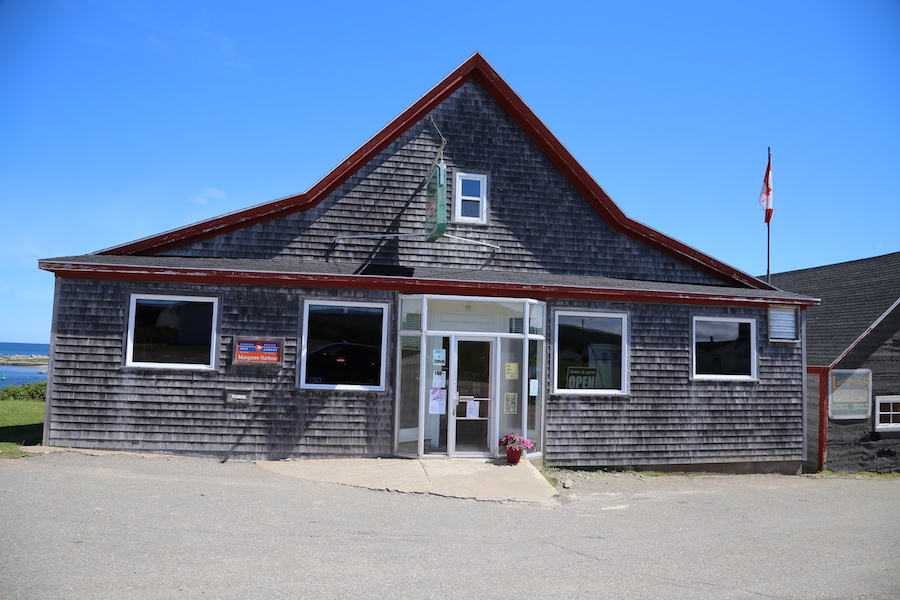 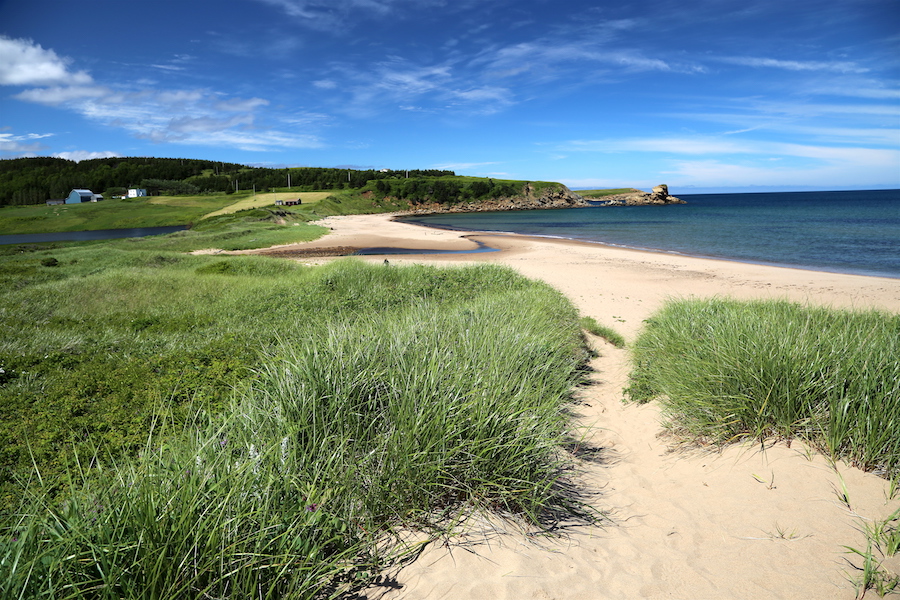 You may be getting thirsty by now and in need of a road soda. Stop at Laurence’s General store in Margaree Harbour, where beverages may share the same aisle as a hammer, and take a walk through this small Cape Breton Island village or along the pristine beach.

If you take the dirt road to the right on Chéticamp Island it will lead you to Enragee Point where the reward is a picturesque red-capped lighthouse. The two-mile gravel road will give you incredible panoramic views of the harbour and the town of Chéticamp, plus you’ll probably pass some cute cattle on way. 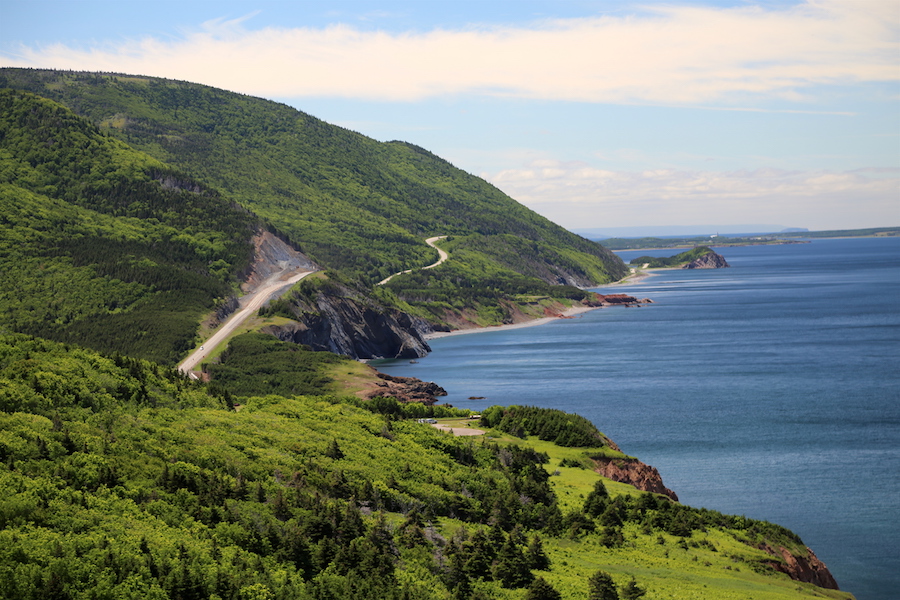 We stopped at a lot of lookouts on the side of the road, but this one was one of the best. Once you get into Cape Breton Highlands National Park (you’ll know by the pay booth at the entrance) pull over at the first outlet on the left.

It’s a quick stop on the Cabot Trail and one of the most breathtaking. 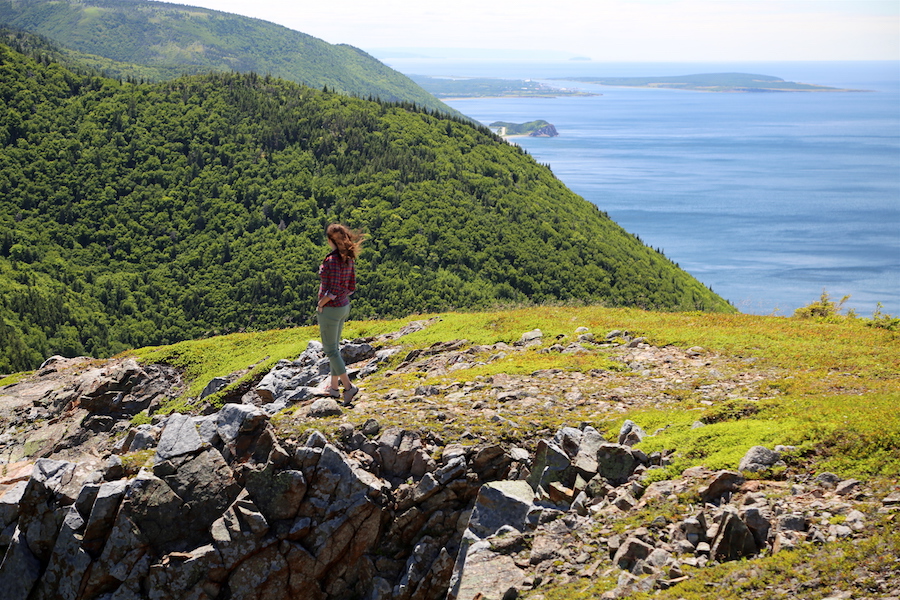 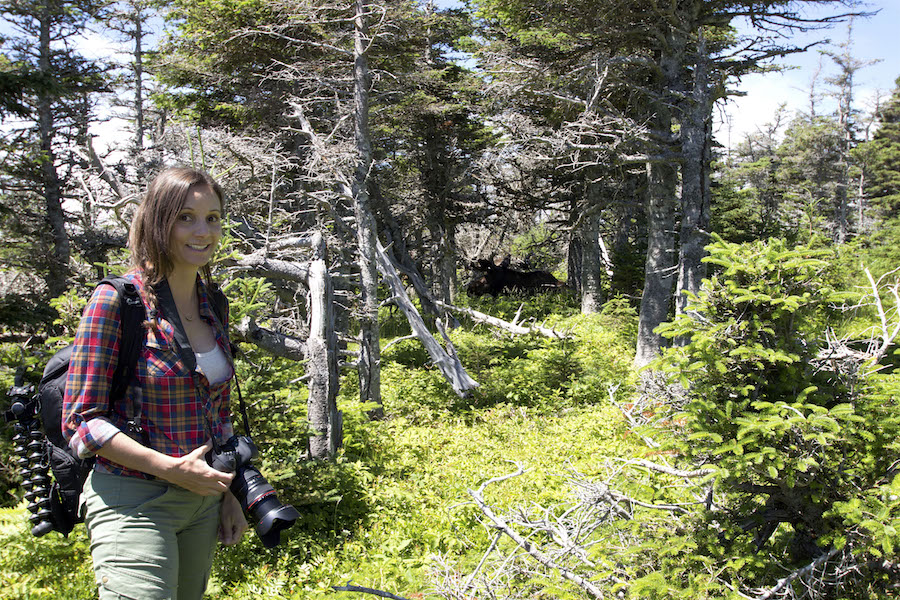 You’ll know you’ve reached the Skyline Trailhead by the dozens of cars that line the entrance. This hiking trail is the most famous on the Cabot Trail and for very good reason. It will not only give you the most incredible views, but you will also have the opportunity to spot a moose (we saw 3!). Make sure to ask the hikers you pass along the trail if they saw Bullwinkle on their route and how far back, so you can catch one before they retreat into the dense brush.

The full trail took us about 2 1/2 hours, but if you are strapped for time when you get to the the fork in the trail head left to get to the boardwalk view and then turn around and come back the same way you came instead of completing the loop which can add up to a half hour. 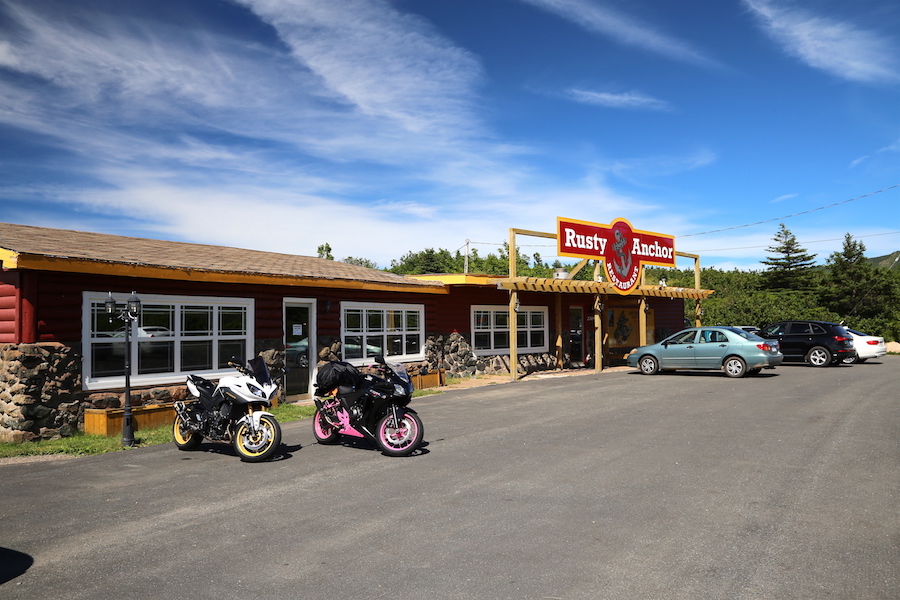 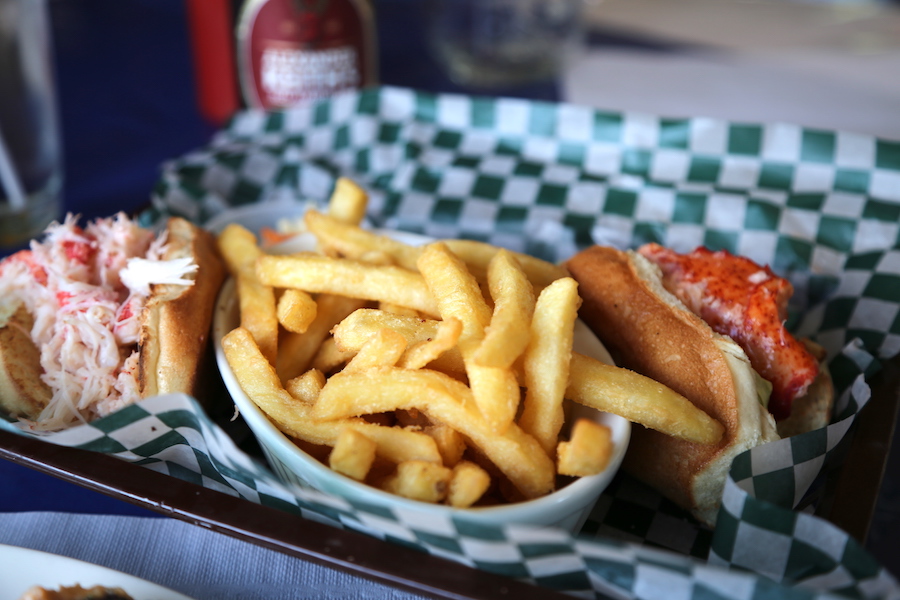 In Pleasant Bay, take a lunch break at The Rusty Anchor, the halfway point on The Cabot Trail. They are known for their lobster rolls and fish cakes — we had both. National Geographic Traveler named their lobster roll the best on the trail, though their fish cakes were no joke either. 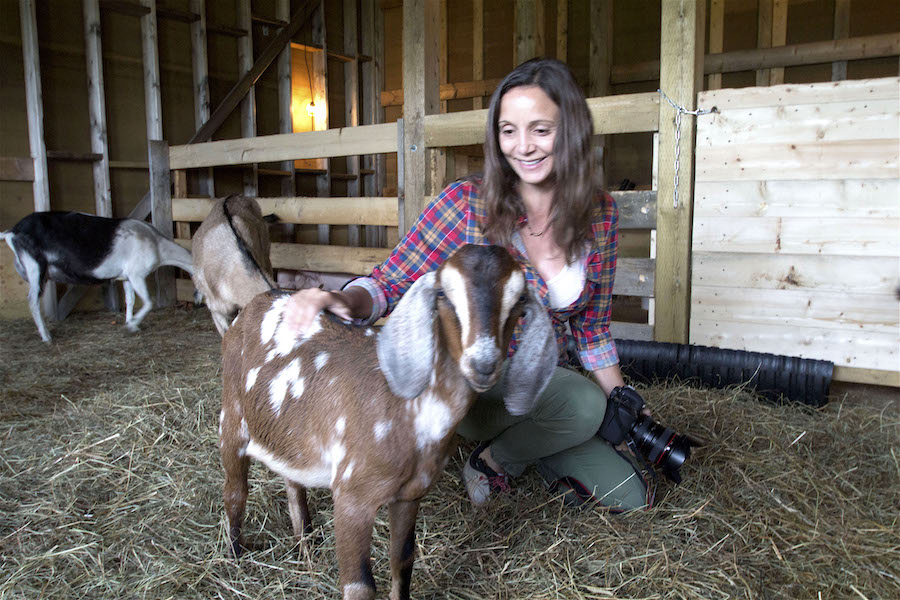 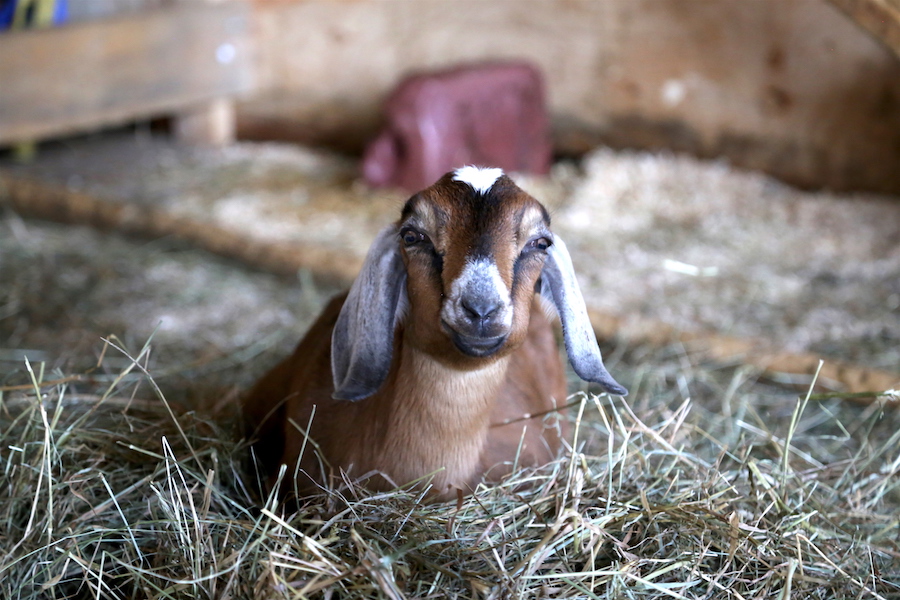 I am going to shamelessly admit that this was my favorite stop—who can pass up a cute, furry 4-legged animal? In the front of the Groovy Goat Farm & Soap Company is a charming shop filled with fragrant soaps made from the farm’s goats milk. The best part is that you are welcome to walk to the back barn to pet the goats. If you are anything like me, you may never want to leave these cuties.

A bonus (as if baby goats weren’t enough) is that there is a pretty white steepled church right next door... 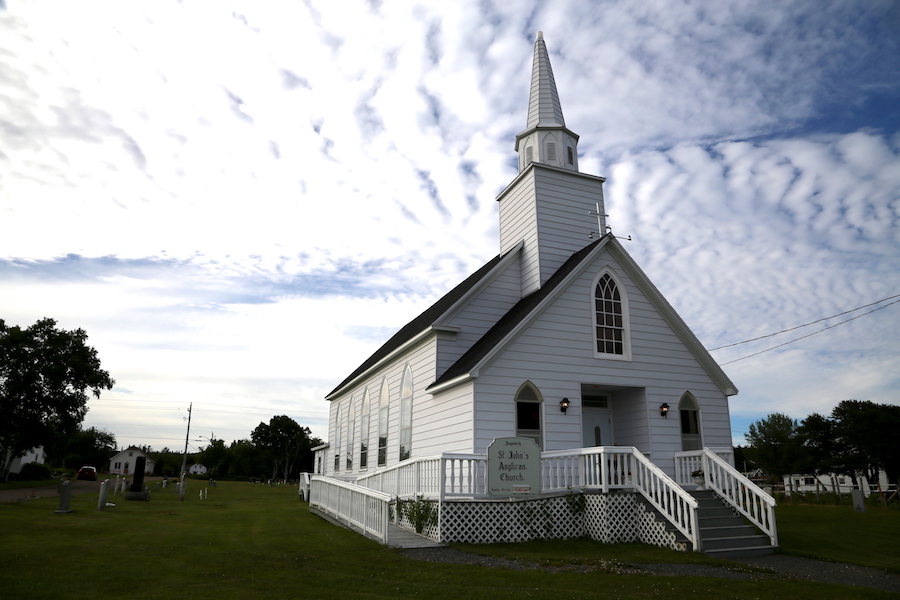 All along the Cabot Trail (and on Cape Breton Island) you will pass a small scattering of cute arts & crafts shops selling handmade pottery, iron, glassware, etc. But, St. Anns Bay is the best place to find a wide selection of shops to choose from in one concentrated area.

It’s a great place to pick up a Nova Scotia souvenir! 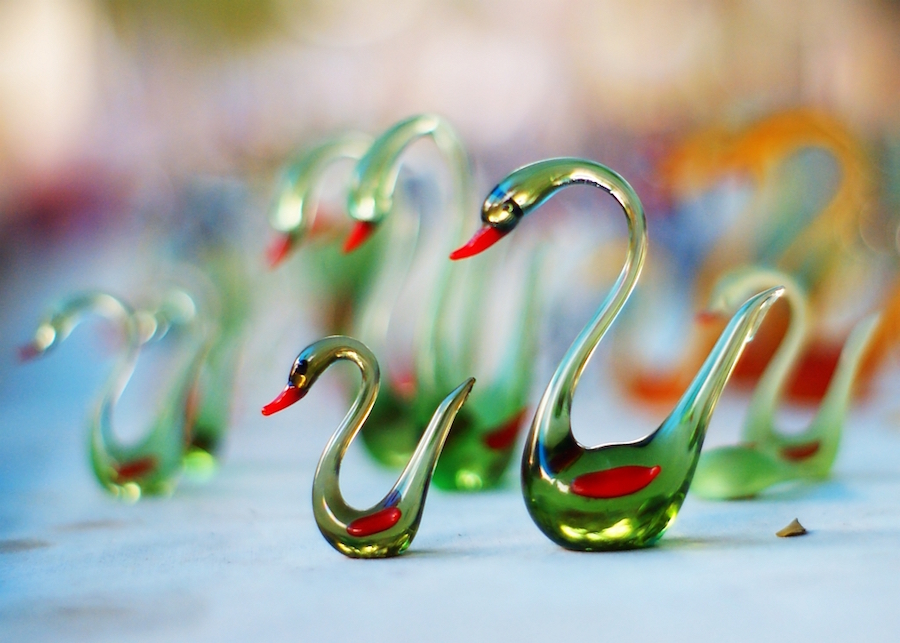 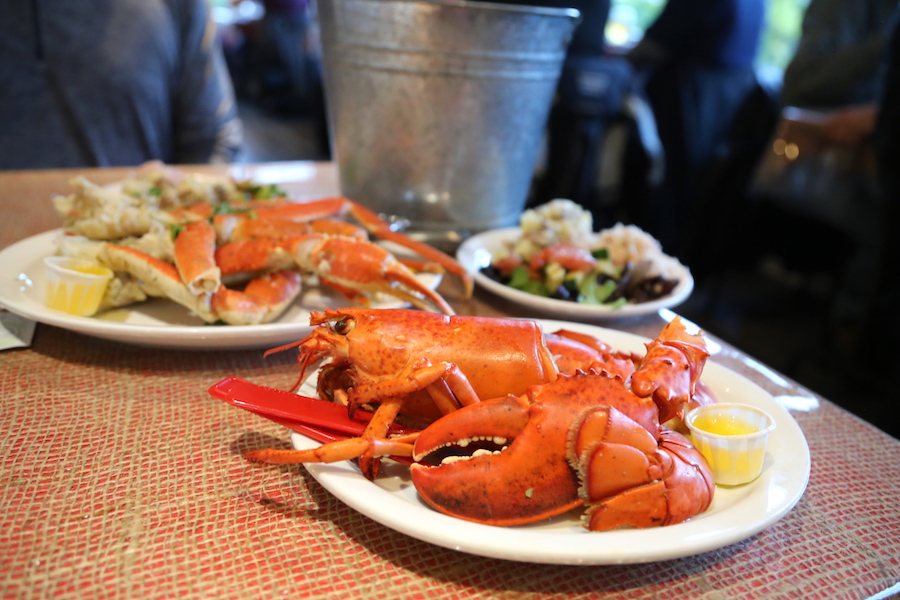 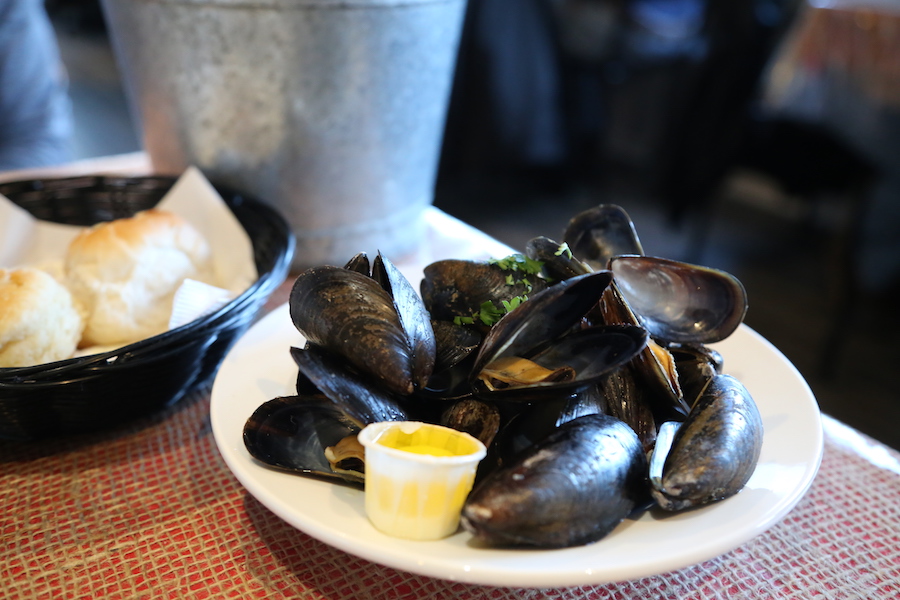 We finished The Cabot Trail at 7:30 PM, over ten hours from when we started. And the perfect ending to the perfect day was dinner at Baddeck Lobster Suppers.

Though this restaurant is technically not on the trail, but still on Cape Breton Island, you’re gonna be hungry after all that driving and there’s no better place to load up on lobster (or crab) with all-you-can-eat mussels. 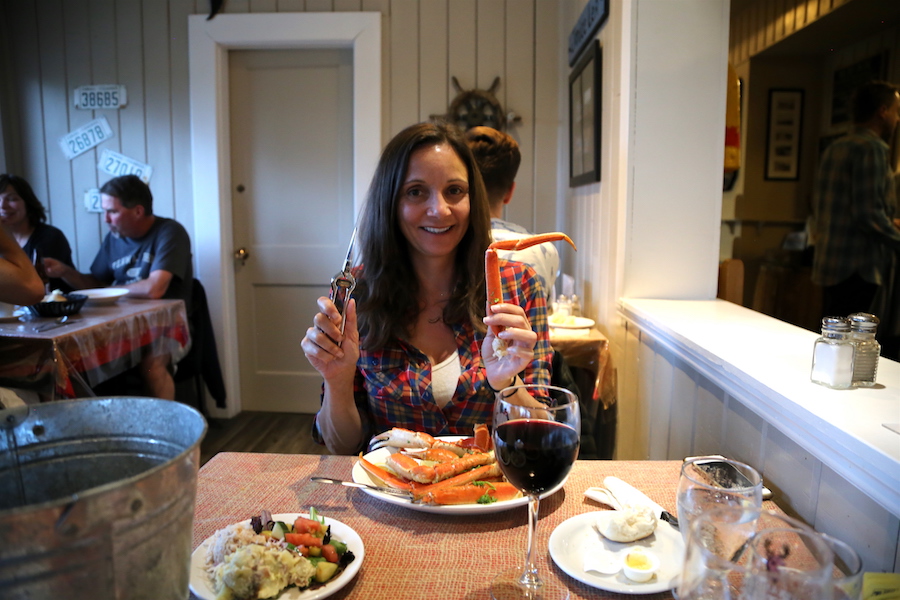 A Nova Scotia Adventure: Tidal Bore Rafting the Bay of Fundy Tides
Nova Scotia Bucket List: 20 of the Best Things To Do When You Visit
Canada: Kayaking with Beluga Whales in Manitoba

My trip to Nova Scotia was hosted by Discover Holidays, but all opinions are my own.