Bucket List of 17 Cheesy Travel Pictures You Must Take

I typically forgo the fanny pack and bright white tennis shoes while traveling, but sometimes I do like to be the cheesy tourist snapping silly photos in front of crowded attractions. I mean who doesn’t want to get a picture of themselves crossing Abbey Road in London? Or standing under the famous Las Vegas sign? So, I compiled a Bucket List of 17 Cheesy Travel Pictures you must take for the folks who are a little bit corny like myself.

1. HOLDING UP THE LEANING TOWER OF PISA

The Leaning Tower of Pisa in Italy is a famous lopsided, circular bell tower made of white marble. Holding up this impressive architectural structure, to prevent it from falling over, may be the most classic of all the cheesy travel pictures, though watching everyone else pose may be just as fun.

Don’t want to hold it up? There are plenty of other silly poses to do: Ten Alternatives to Leaning on the Tower of Pisa 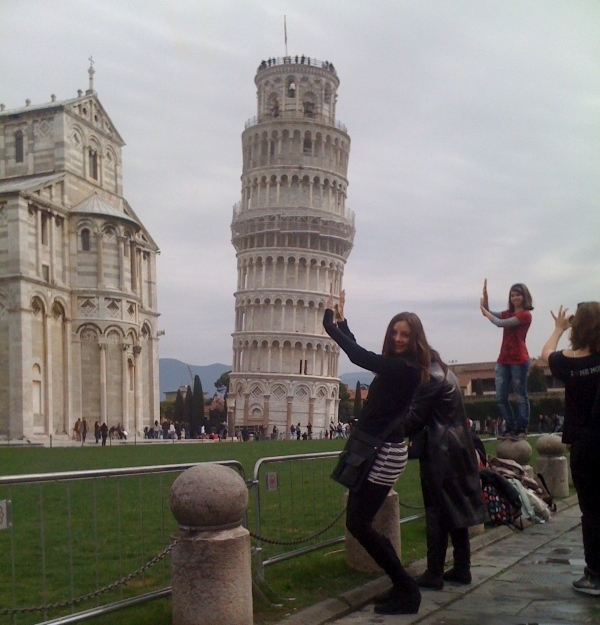 2. LAYING DOWN ON FOUR DIFFERENT STATES AT ONCE

America’s Four Corners is where Colorado, New Mexico, Arizona and Utah meet. It is the only place in the United States where you can be in four states at once. Lying down sprawled out on this spot is popular amongst the tourists, but you sit cross-legged if you prefer. 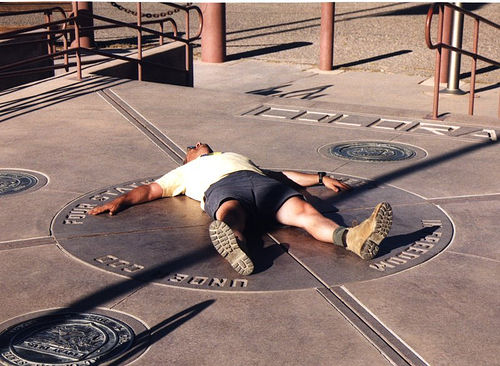 In Paris, the iconic Eiffel Tower is a must see. Located on the Champ de Mars, the tower’s 1,000+ feet are hard to miss even from a distance. Enjoy the view and also try giving it a little pinch… 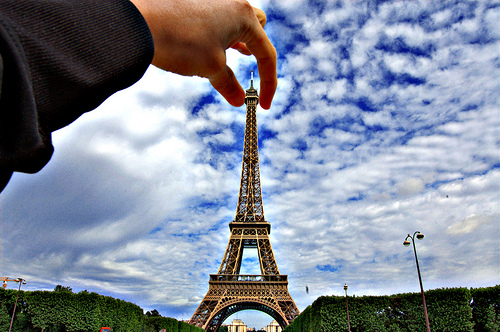 4. WALKING ACROSS ABBEY ROAD IN LONDON

On August 8th, 1969 a photographer spent approximately ten minutes taking six photos of the Beatles on Abbey Road in London. One of the six ended up being the album cover to Abbey Road and it made this crosswalk one of the most famous in the world. Tourists flock from all over for the chance to get a photo of themselves walking across Abbey Road. And I was no different. 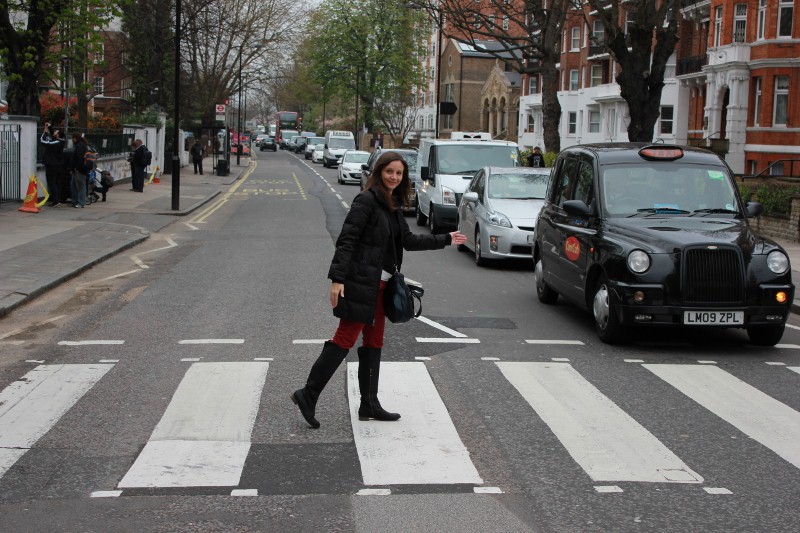 5. KISSING THE GREAT SPHINX OF GIZA

The Great Sphinx of Giza is a colossal limestone statue in Egypt that guards the front of Khafra’s pyramid. It is a mythical character with the body of a lion and the face of a man. Why not give him a little smooch… 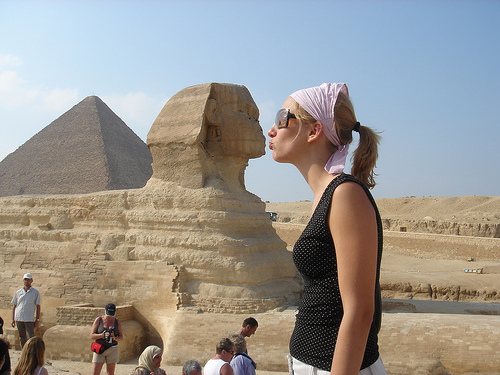 Just south of Mandalay Bay you will find the Welcome to Fabulous Las Vegas sign where you can wait in line for the popular “Under the Vegas Sign” photo opp. See, Las Vegas isn’t just about gambling and dancing girls. 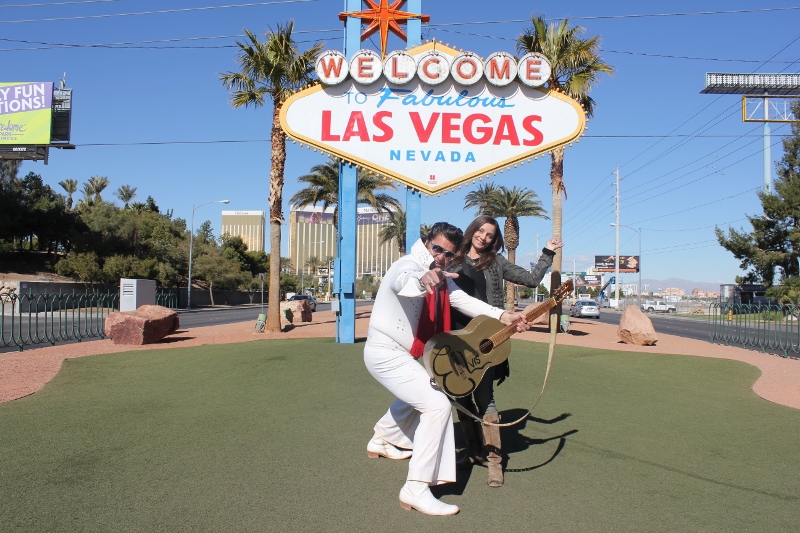 7. COVERED IN MUD AT THE DEAD SEA

The Dead Sea is a body of water, bordering Jordan and Israel, that has a high salt content which allows people to easily float. The Dead sea mud is thought to have therapeutic qualities, so thousands of travelers slather it on their bodies before taking a dip into the water. Of course, snapping a photo before rinsing off is a bucket list must. 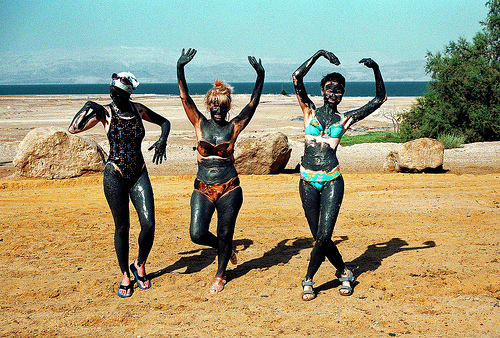 Not only do you to pinch the Eiffel Tower in Paris, but you should also touch the tippy top of the Louvre Museum pyramid. Another cheesy idea. 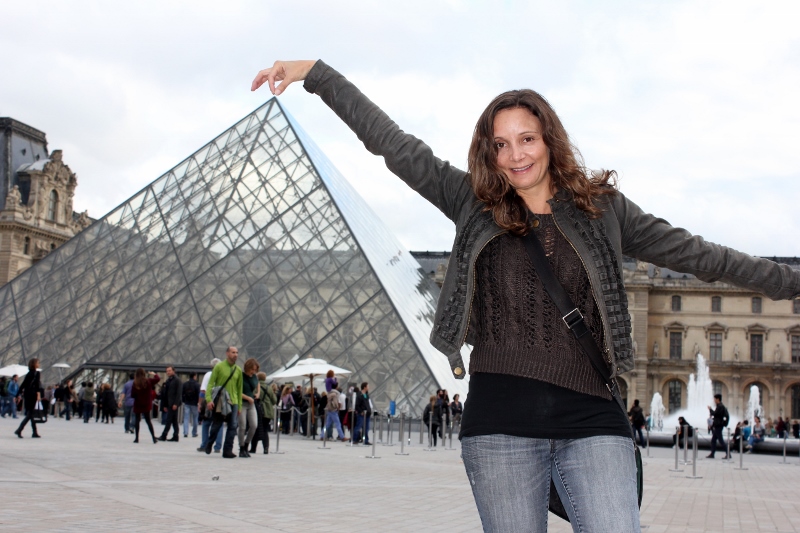 9. HOLDING BIG BUDDHA IN THE PALM OF YOUR HAND

At 34 metres (112 Ft) feet tall, Hong Kong’s Tian Tan is one of the largest sitting Buddha’s in the world. Maybe it’s not the biggest, but it certainly is breathtaking. And by strategically placing him in the palm of your hand, no one could guess its massive size. 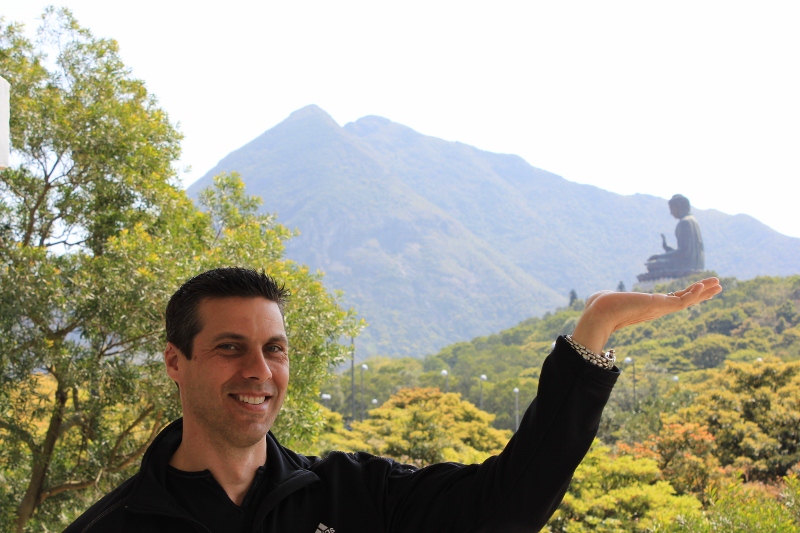 10. POSING WITH A WAX FIGURE AT MADAME TUSSAUDS

Millions of visitors have been awed by the wax figures at Madame Tussauds, which has museum locations throughout the world. And there is no shortage of celebrities to pose with. Mr. Hefner was my target… 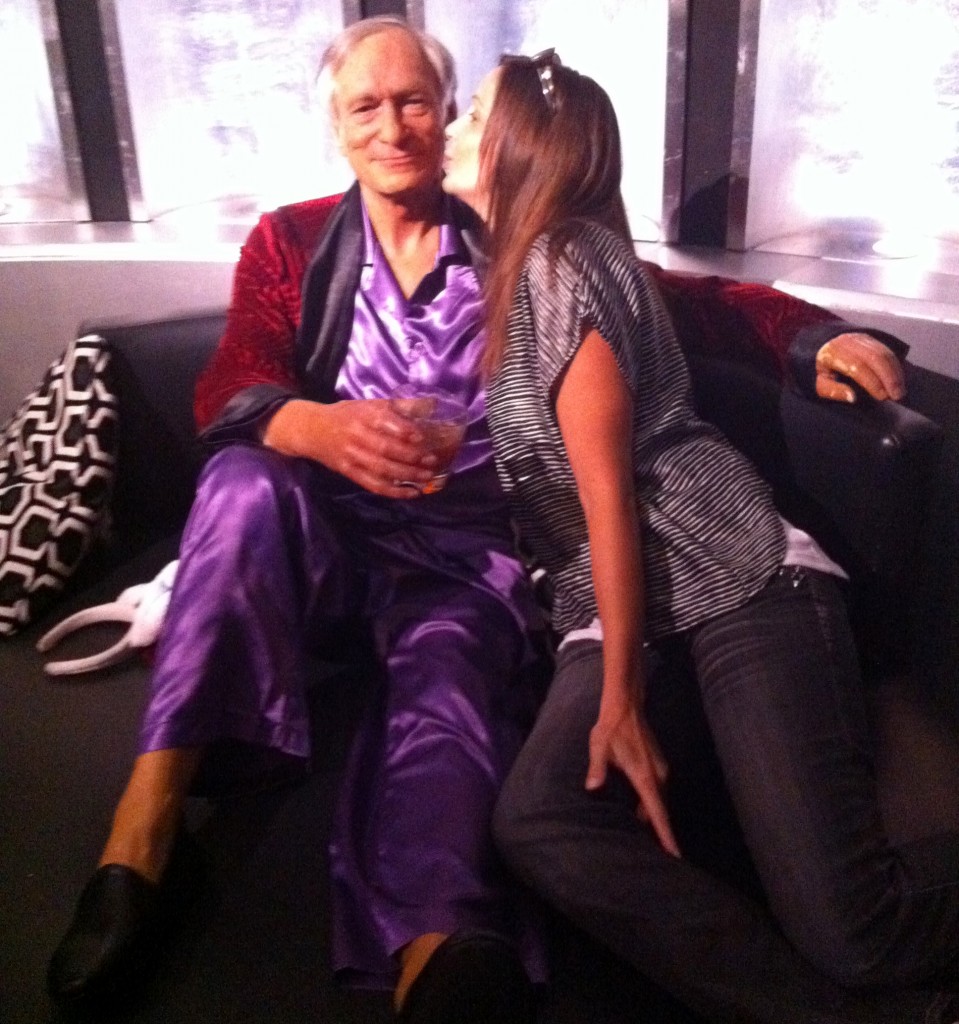 11. THROWING A COIN INTO TREVI FOUNTAIN

The Trevi Fountain in Rome is one of the most visited attractions in Italy. And for good reason. Not only is it an impressive piece of art, it is also good luck to throw money into the fountain. It means that you will one day return to the eternal city. 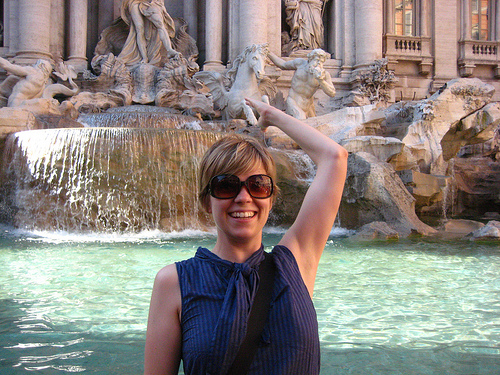 While traveling throughout San Francisco you are bound to witness a few jam-packed cable cars with happy people hanging off the sides. Be one of those people. 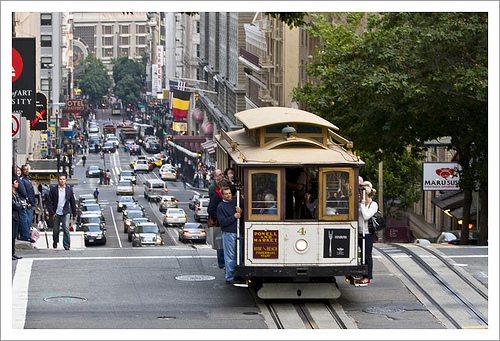 Kissing the Blarney Stone in Ireland is said to bestow the gift of eloquence. Who couldn’t use a bit of that? So, even though it will entail a laying on the ground and leaning backwards, give this stone a passionate smooch. 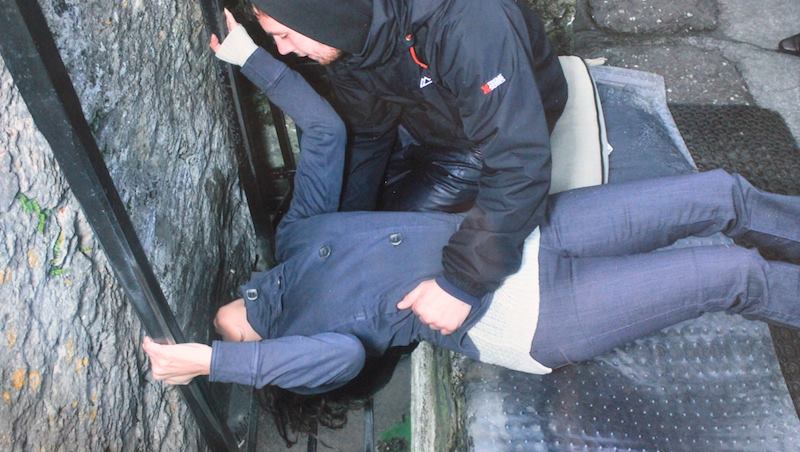 14. POSING WITH A ROYAL GUARD IN LONDON

The royal guards seen at the London palaces are in charge of upholding traditions through their  ceremonial duties. But, they also make great photo props. Though they will not crack a smile for the camera, try to get close enough for a little snap shot. 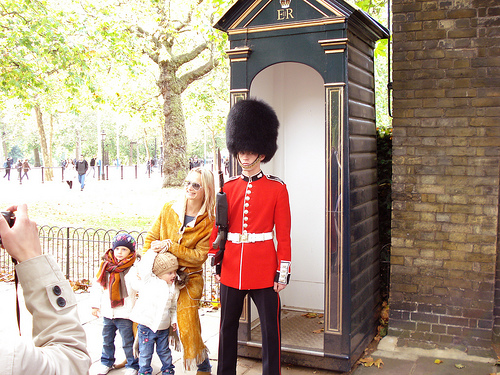 15. COMPARING HANDPRINTS WITH A CELEBRITY

Both at Hong Kong’s Avenue of Stars and in southern California at TCL Chinese Theatre you can compare your hand prints to a celebrity. I chose to put my palms into the cement stamp of Jackie Chans. 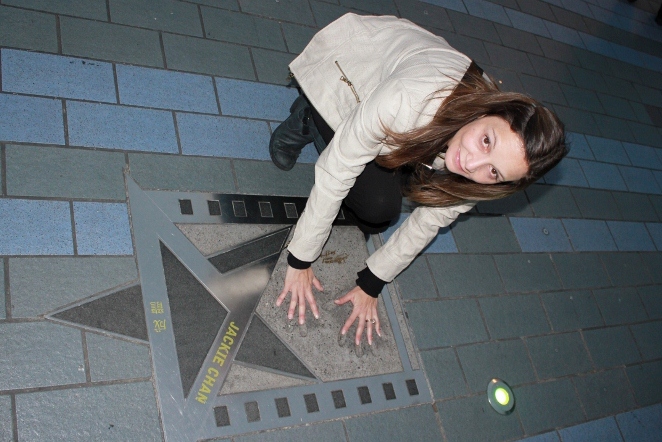 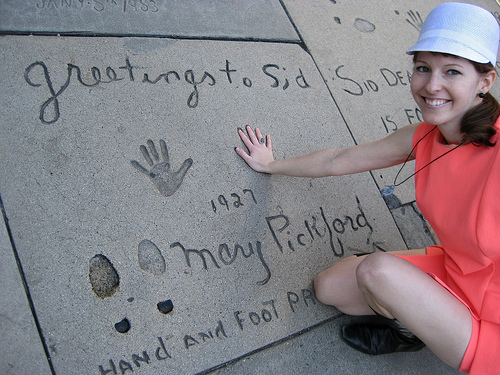 16. IN A RED PHONE BOOTH IN GREAT BRITAIN

Along with the black taxi, the red telephone box has become iconic in Great Britain.  So, after you take your photo crossing Abbey Road in London, pop by a booth to make an easy two checkmarks on this cheesy travel photos bucket list. 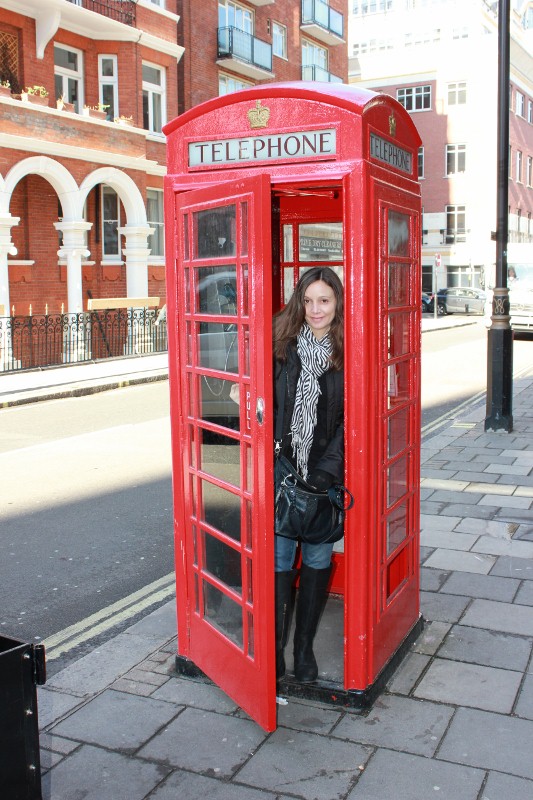 Located at the back Rijksmuseum museum, the 6 1/2 feet tall and 77 feet long ‘I amsterdam’ sign draws countless visitors each year. Tourists can be found posing in front of it, inside of it and even on top of it. 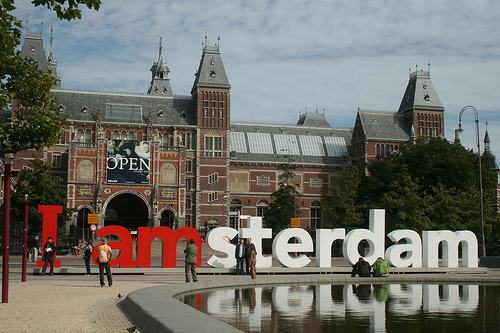 How many of these cheesy travel picture ideas have you taken? How many will be added to your bucket list?