Barcelona Bike Tour: How to See the City on Two Wheels 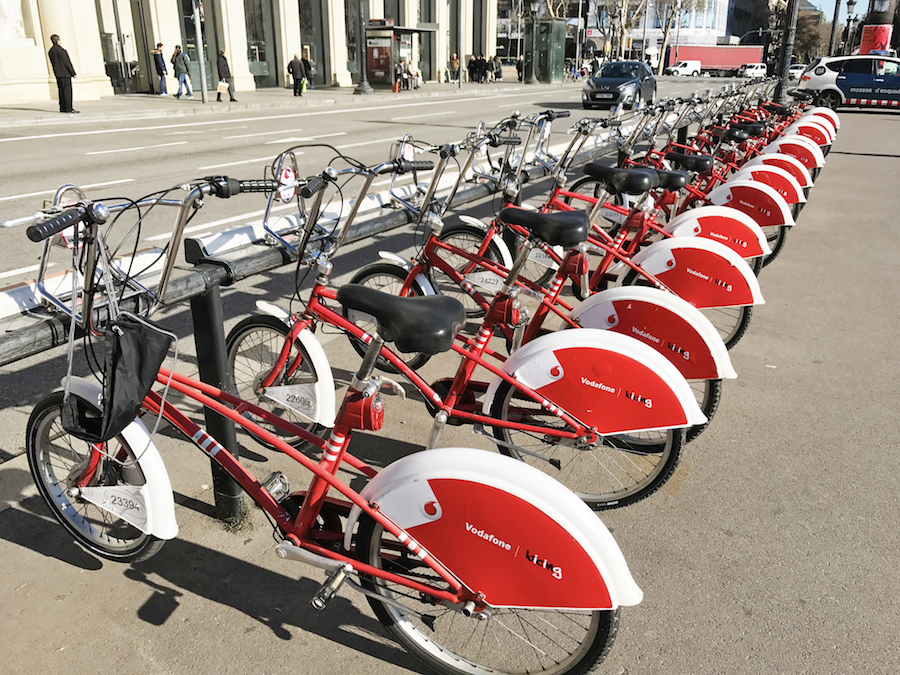 Barcelona Bike Tour: How to See the City on Two Wheels

As an amateur bicycle-aficionado who has biked through Berlin and Copenhagen for days, I couldn’t resist hopping on a bicycle to see Barcelona like a local. On my first day in this charming Spanish city by the sea, I opted for a guided bicycle tour to get the lay of the land. I reserved my spot on a two-hour 11am tour online with Bike Tours Barcelona for 25 Euros (approximately $30), with payment collected after the tour. 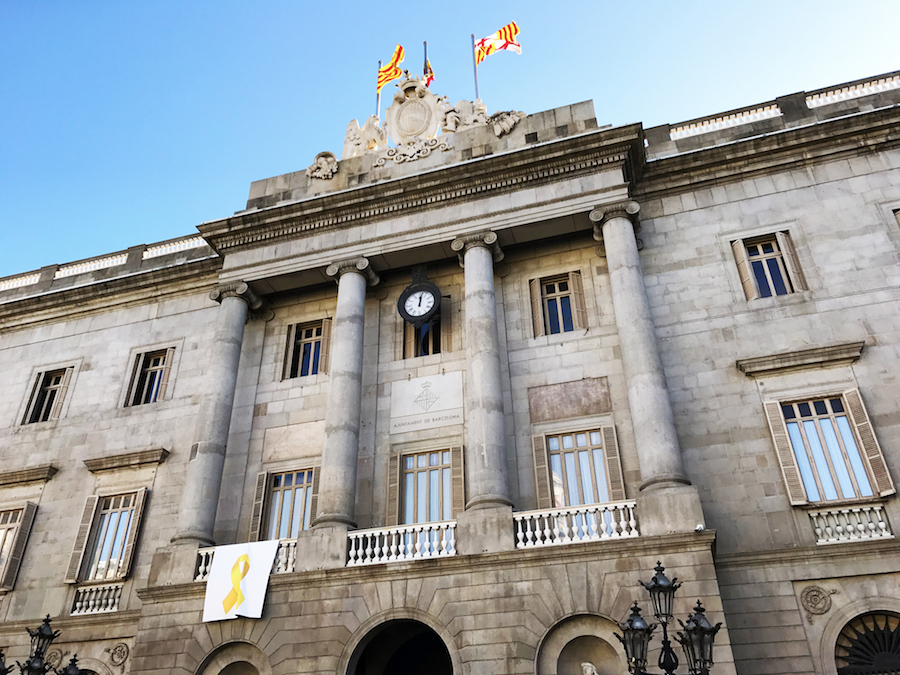 The bicycle tour meets at the bustling Plaça Sant Jaume, home to Barcelona’s City Hall and government buildings in the charming city center. A number of bike tours leave every morning at 11am from this plaza (or Plaça, as they say in the local Catalan language), so make sure to get on the right one. While some bike tours have larger groups led by ex-pats from other countries, I was happy to join Bike Tour Barcelona’s smaller, more personal group with a local English-speaking guide who grew up in this city.

After a 10-minute stroll to the bike shop, I picked out a bicycle and we were on our way. My guide led our small group of five through the winding, picturesque alleys of the Gothic Quarter, known as the Barri Gòtic in Barcelona’s Catalan language. Luckily, this happened to be a Sunday morning, the day of the week with the lightest foot and car traffic. The closed shops meant fewer pedestrians, making it much easier to bicycle through the narrow streets. 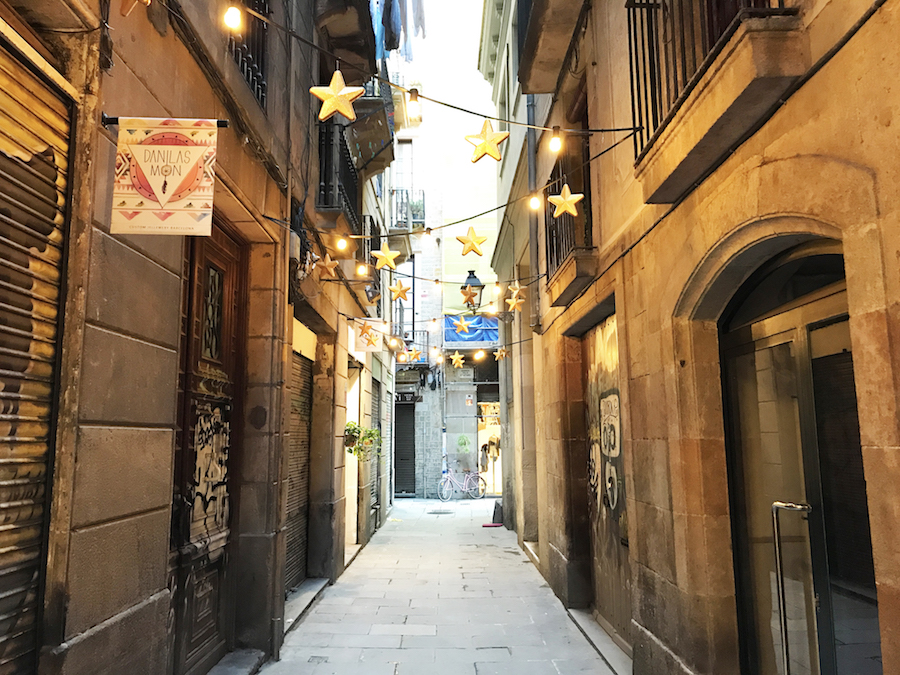 My favorite stops while bicycling through the Gothic Quarter: 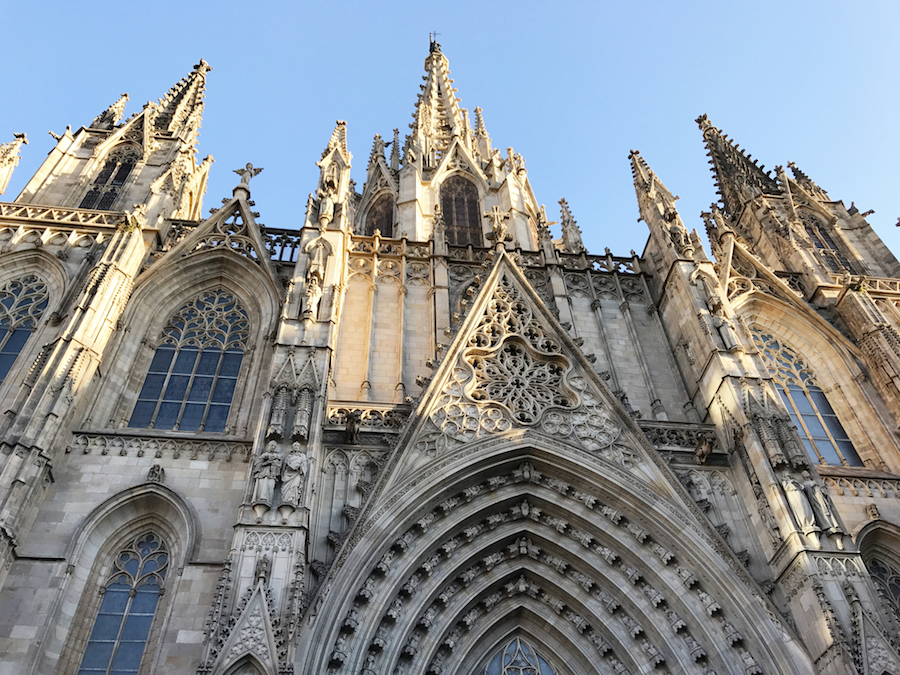 After checking out the Gothic Quarter’s famous sights and plazas, my bicycle tour took off for the modern, wide expanses of Ciutadella Park with its grand, ornate fountains. We then traveled along a dedicated bike lane towards the breezy Mediterranean Sea. A quick break for drinks near the beach pumped us up for the last stretch – a ride along the coastal bike path and through the grid-shaped, pastel-colored seaside neighborhood of Barceloneta. 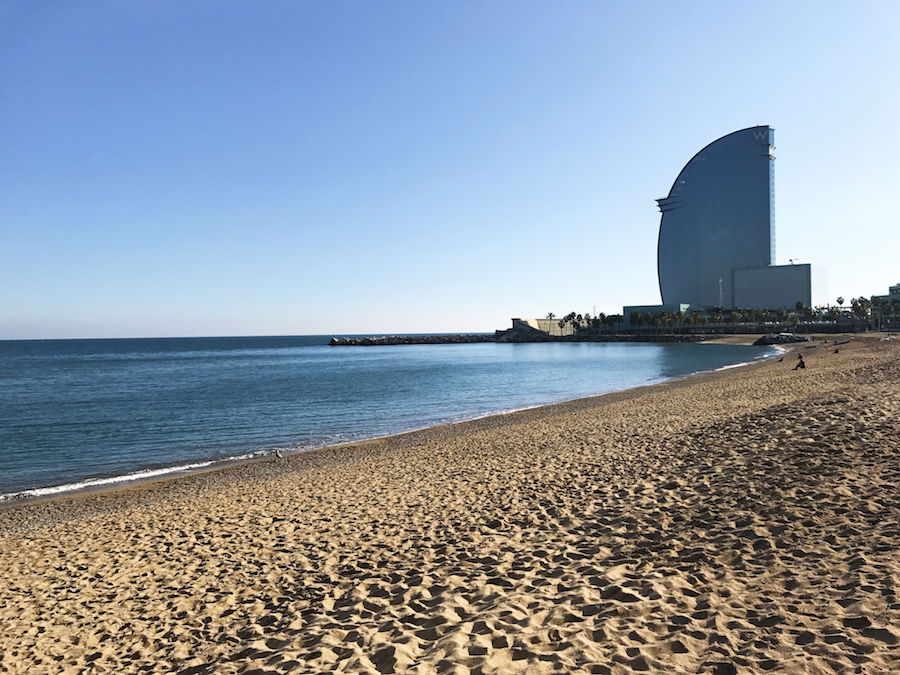 After a glorious day of bicycling and walking, I returned to my hotel room overlooking the vibrant Plaça de Catalunya, which comes alive with fun-to-watch fountain shows every evening. 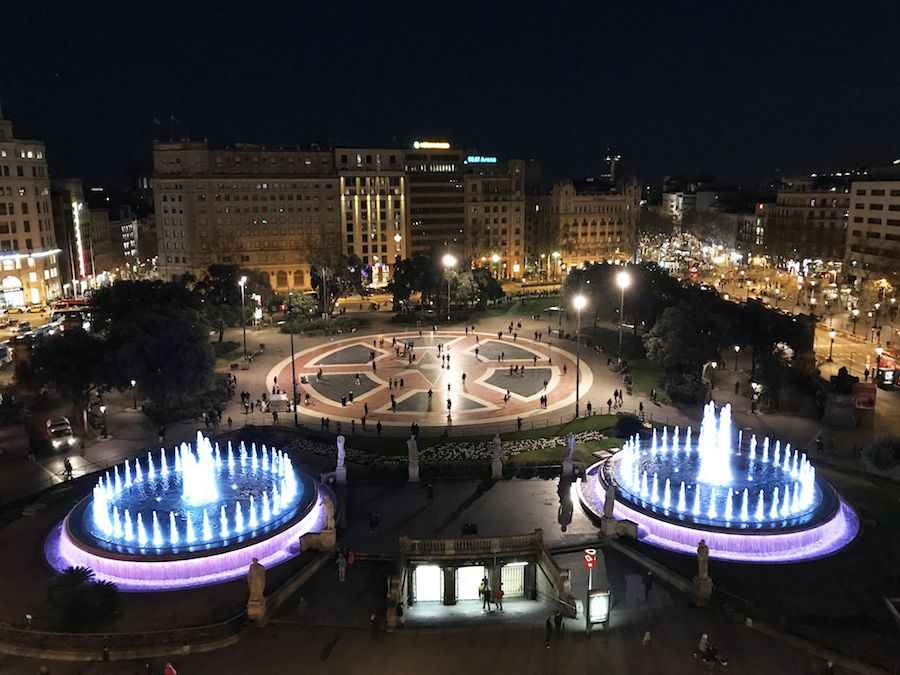 I stayed at the brand new Iberostar Paseo de Gracia hotel, full of beautifully-furnished, designer rooms and an incredibly hospitable staff. Even in a city brimming with architectural wonders, this hotel stands out with its neo-baroque décor and sculptures by Barcelona’s own Frederic Marès. 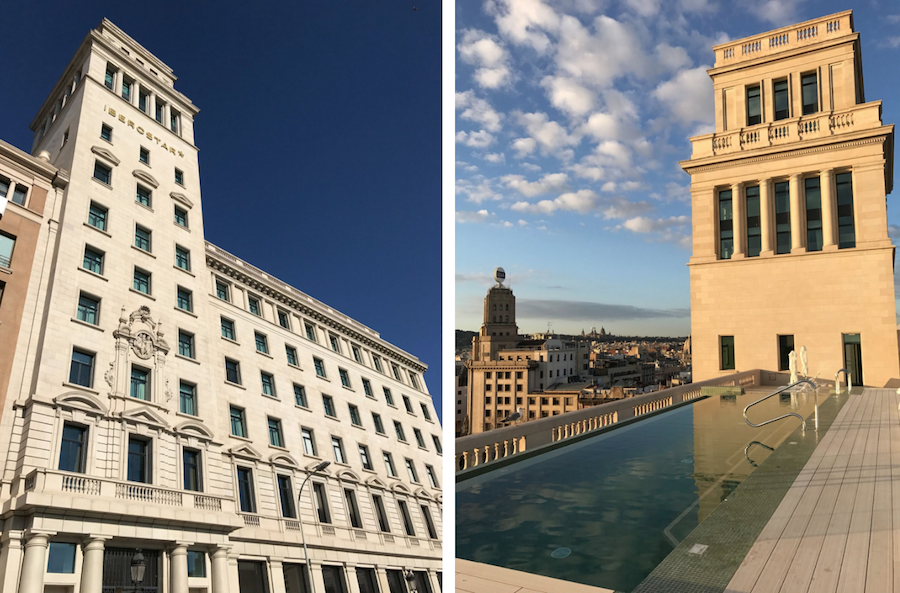 The classical building dates back to 1942 and combines a historic exterior with ultra-modern elements in the rooms, such as flat-screen televisions built into the walls and a sleek double sink. 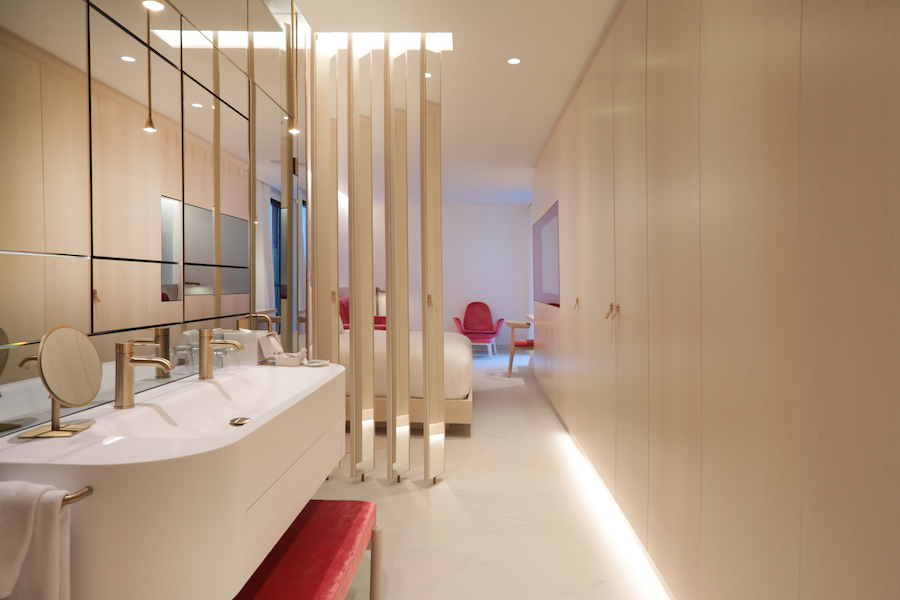 Top floor suites have sweeping, 360-views of the city, including the epic Sagrada Familia Cathedral in the distance. The hotel also has a restaurant with magnificent plaza views and a rooftop pool, the ultimate sanctuary in this city. 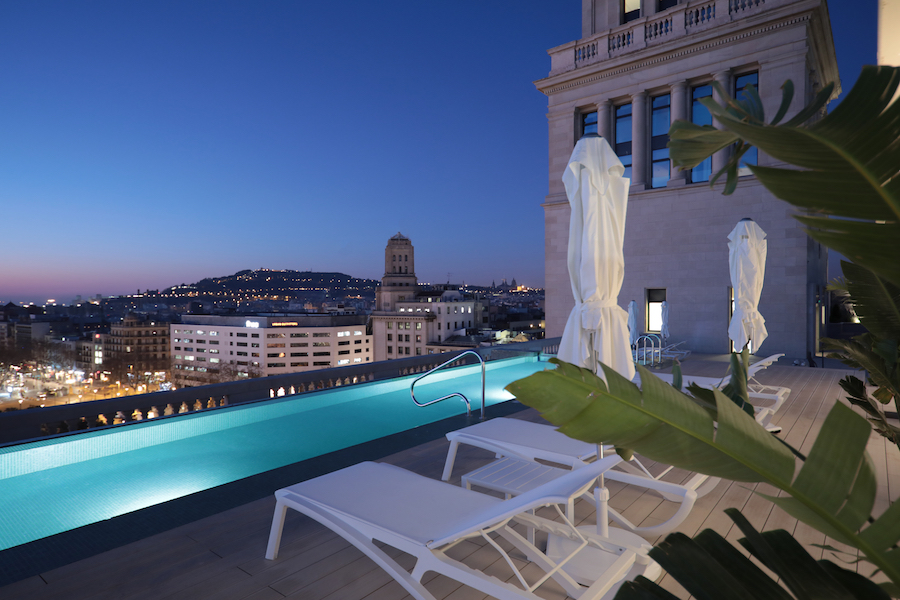 The Iberostar’s gracious staff helped me figure out activities, including traditional flamenco shows, local restaurants, and bicycle rentals around town. Before heading out for a solo day of biking through Barcelona, I started the morning with a hearty breakfast at the Iberostar hotel’s restaurant while watching the sun peek out above the city skyline. I enjoyed the delicious assortment of freshly baked breads and pastries, including the ensaïmada, a sweet, coiled pastry covered in powdered sugar from the island of Mallorca. 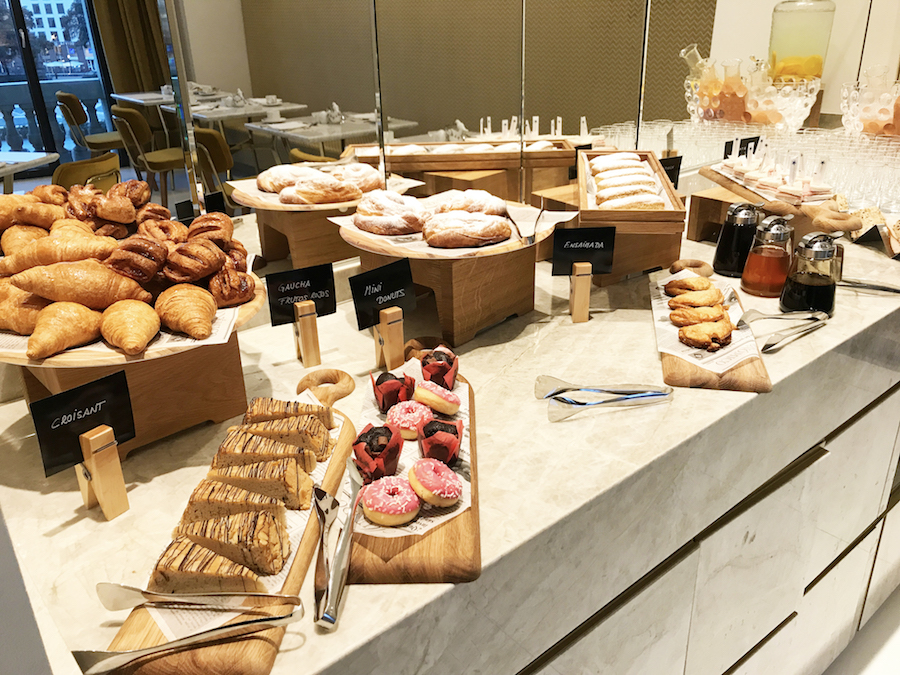 I especially loved the Tortilla de Patatas (Spanish omelette with potatoes), the selection of cheeses (especially my favorite, manchego, made of sheep’s milk), and freshly squeezed juices. Now, I was ready to hit the streets!

On my bicycle tour, I had made a mental note of my favorite places so I could explore on my own and veer off the beaten path in the old quarter. While tourists aren’t able to rent the city bikes stationed at kiosks around Barcelona, there are a variety of private rental shops in the city center. The Iberostar staff found a bike shop close to the Plaça de Catalunya and gave me detailed directions.

Barcelona Rent A Bike has three locations, including one just a few steps away from the fantastic Teresa Carlos vegetarian restaurant, where you can load up on fresh pressed juices. For only 10 Euros (approximately $12), I picked up a bike for four hours (and I paid a few extra Euros for bike insurance.) Now, I was free to roam around without a plan and check out the nooks and crannies of the city’s ancient corridors, including the Jewish synagogue, a giant food market, and of course, a few chocolate shops and bakeries. 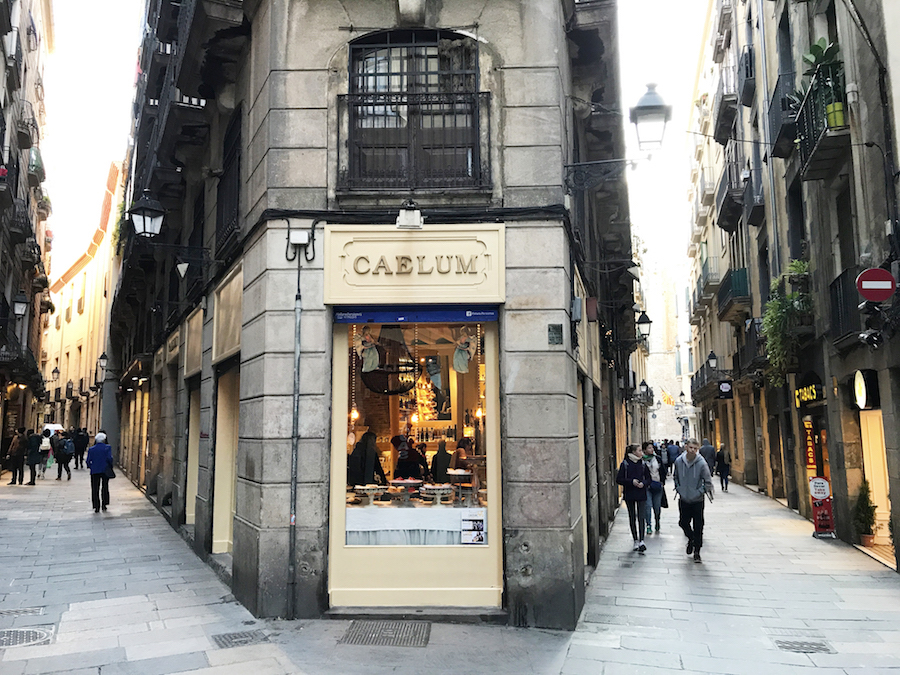 For me, the biggest thrill of bicycling the Gothic Quarter is cruising down the medieval alleyways while watching life unfold before my eyes, as if on a movie set. As I glided through the maze of streets (or “Carrers,” as they’re called in Catalan), I saw locals greet one another, grandmas chuckling, children playing, teens showing off their latest skateboarding tricks, bakers carefully laying out pastries in shop windows, and stylish Spaniards gathering in trendy shops and cafes. I biked past centuries-old Roman ruins tucked behind churches and violinists playing outside Barcelona’s famous Cathedral.

Later in the evening, I returned to my room at the Iberostar Paseo de Gracia and almost fell into a deep sleep in my super comfortable bed. But, I realized I had a music show to get to at the Palau de la Música Catalana. The renowned concert hall is an example of the Catalan modernista style that Barcelona is so famous for. Without my bicycle, I walked as fast as I could to the concert, only about ten minutes away by foot. 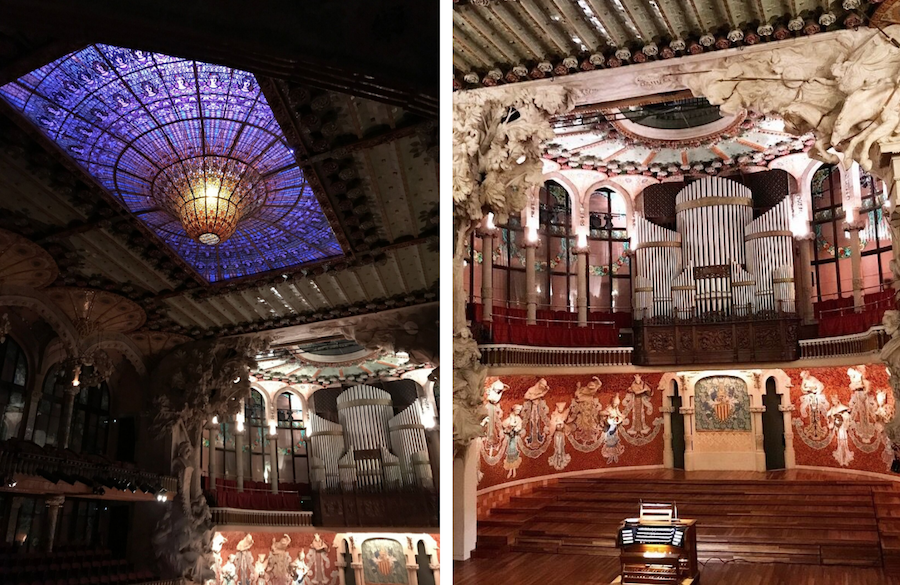 As I took in the sounds of an organ concert inside the stunning venue, I couldn’t take my eyes off of the gorgeous multi-colored chandelier. After just a few days of exploring on two wheels, I felt quite like a local as I meandered through the old streets back to my hotel via a late dinner stop at Flax and Kale Passage vegetarian restaurant before calling it a night. 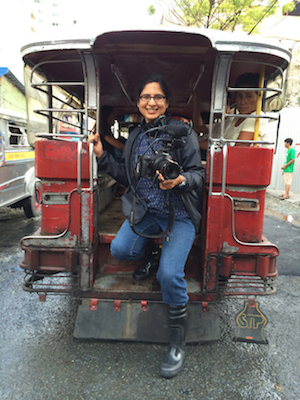 Sonia Narang is a California-based journalist and photographer who covers world cultures, travel, and more. On her travels, Sonia is always on the lookout for one-of-a-kind driving trips, tasty vegetarian food, and global music. A sweet tooth, Sonia once won a Japanese speech contest about her lifelong quest for the perfect cake. 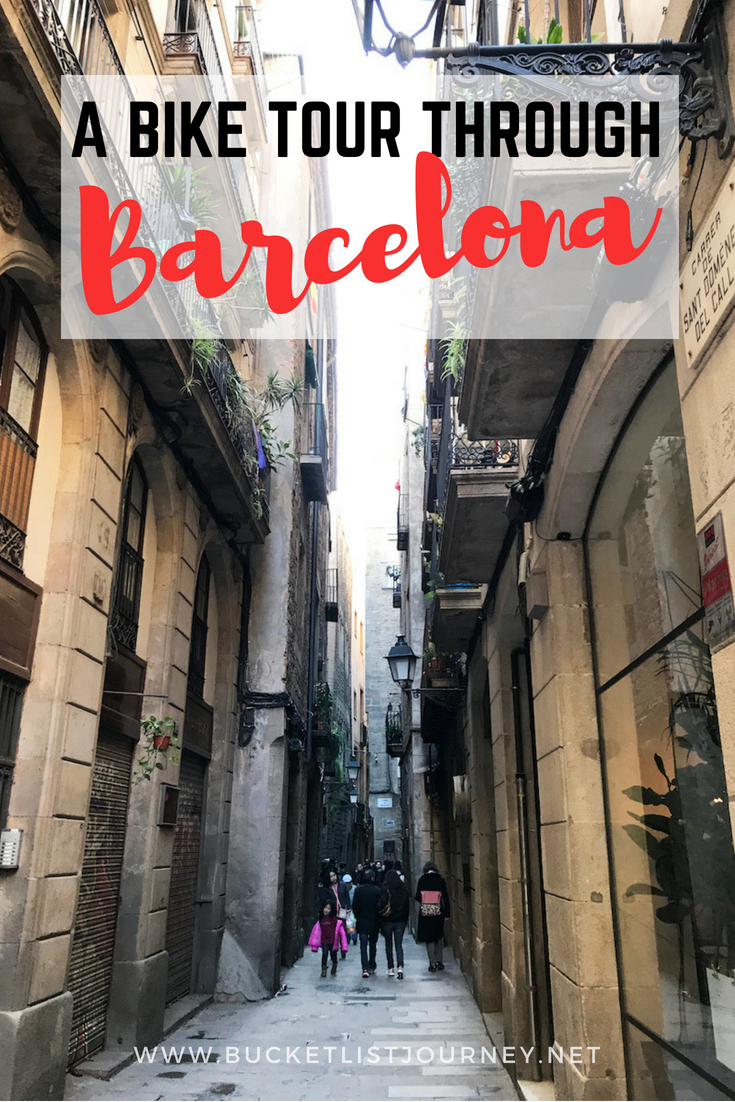