I couldn’t possibly travel all the way to Africa without indulging in a bit of the traditional food culture and, while in Tanzania, that meant eating Ugali. Ugali is a stiff porridge made from maize flour (corn meal) and has many similarities to the more familiar Italian polenta.

After our Shadows of Africa safari had ended, tour owner Natasa indulged us in another memorable experience, a trip to a truly traditional outdoor eatery. Arusha City Park featured local dishes, including Ugali.

We arrived to dozens of wobbly tables which were set with Pepsi tablecloths and blue plastic chairs. The country music of Dolly Parton was playing on the radio. Interesting choice. We took a seat at one of the vacant tables and it was table service from then on, albeit poli poli (slowly, slowly). Poli poli was a term we’d gotten used to while in Africa. No one appeared to be in much of a hurry, which was okay because neither was I. 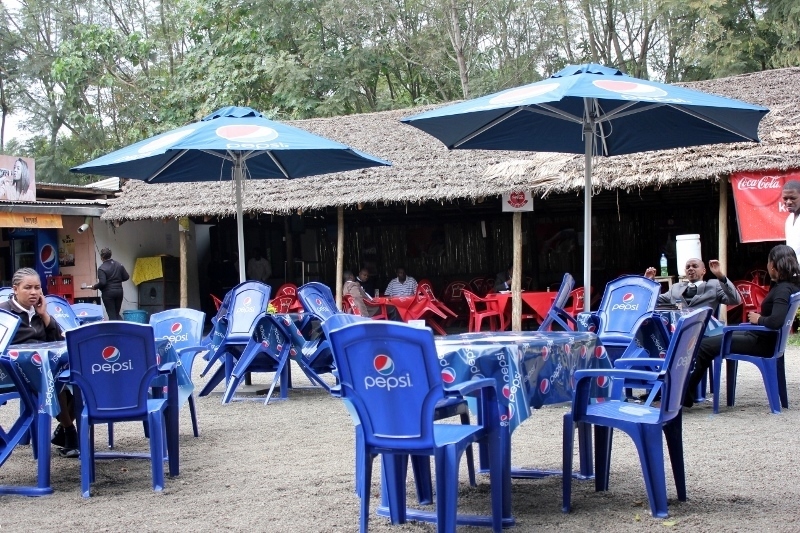 Timothy, our safari driver and native Tanzanian, did the ordering. He also answered our two dozen food related questions. Just like he did with the animal inquiries while on safari in Serengeti.

He ordered a selection of dishes for sharing;
Ugali Samaki – Samaki means fish and in this case that fish was talapia. The whole fish was served covered with cabbage. 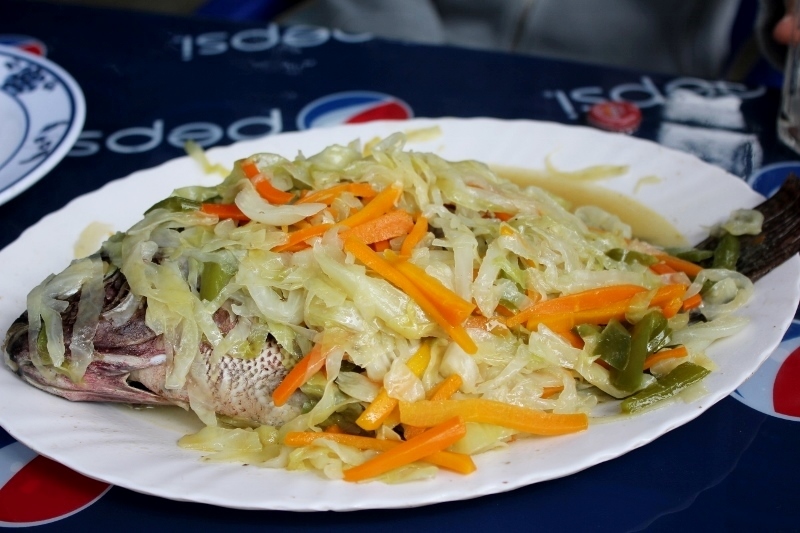 Ugali ng’ombe Choma – Diced barbecued beef with all the parts of the animal. When I asked which parts where included, all he said was “you don’t want to know”.
Ugali Kuku Choma kienyeji – A traditional barbecued chicken.
Ndizi Machalari – A tasty dish with banana and beef where the bananas taste just like a potatoes.
Chips: The chips (aka: French fries) were an odd companion to the rest of the meal, but some sort of potatoes were served with every other meal I had in Africa too. 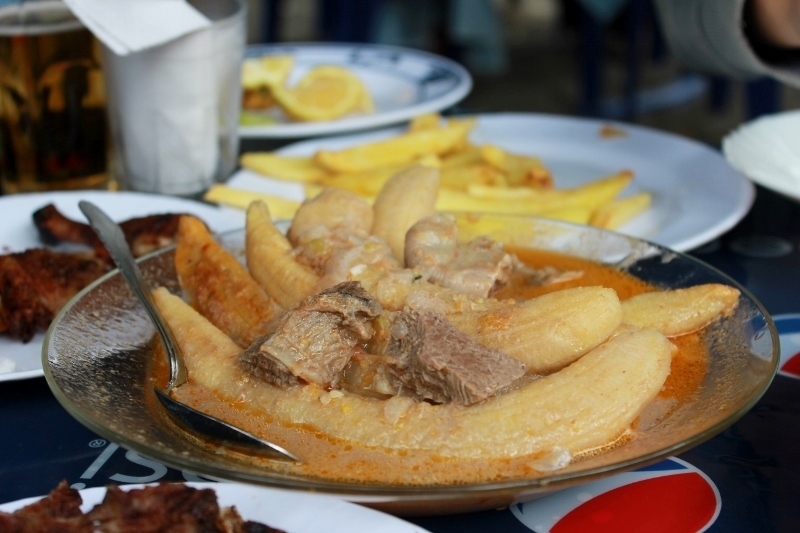 Prior to eating I made my way to an orange thermos that was set up to the side for hand washing. Soap was found in an old water bottle with a hole punched in the top for easy dispensing.

Hand washing is always important, but much more so in Africa because here they eat with their hands. Even though we knew this, we asked for forks. They gave us spoons. We ate with our hands. Turns out they are very handy utensils. 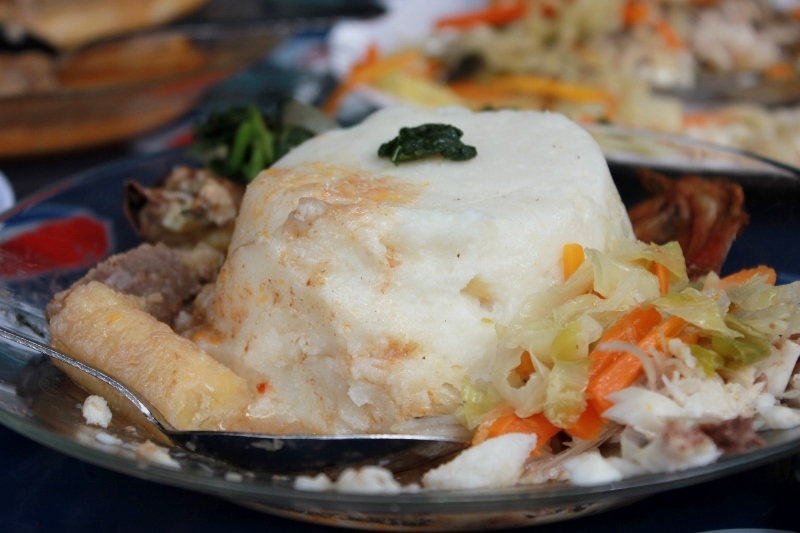 The starchy Ugali came by itself in a perfect mound in the center of the plate. I surrounded my white hill with a little from each of the share plates. I like variety. Then, as instructed, I took small sections of the cornmeal, rolled it into a ball and sopped up all the other goodies with it.

Ugali tastes similar to a standard polenta, with no seasoning. Not much flavor until you dip it into everything else. 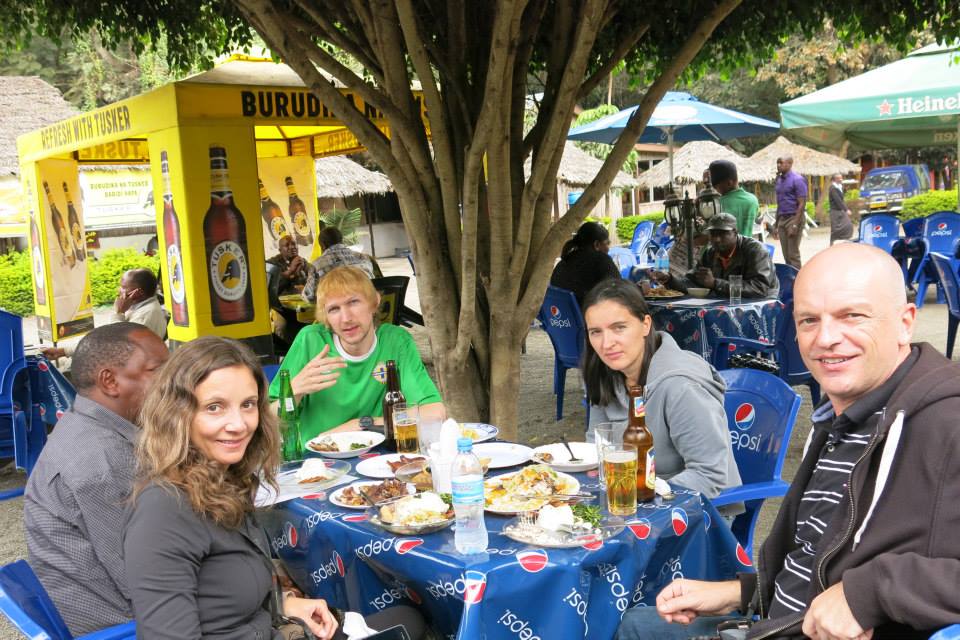 Upon leaving we were given the bill, unitemized. Natasa, a resident of 6 years, quickly caught this and said she wanted one that was itemized, which surprisingly led us to a bill that was 10,000 shillings less. Hmmm. They may have expected clueless tourists, but they got a witty resident. Take that.

Disclosure: I was a guest of Shadows of Africa, but all the words I write come straight from my, sometimes distorted, mind. Just as it should be.