Drink Bourbon at a Distillery in Kentucky

I once toured a distillery in Portland, Oregon where we drove to a quiet warehouse district of town, walked into a small aluminum, garage-like building and the tasting room was a short wooden bar in the middle of the production facilities. The Buffalo Trace Distillery in Kentucky is nothing like that. This place is grand, filled with brick and rich in history.

Buffalo Trace is a bourbon distillery located in the town of Frankfort, a short 40-minute drive from Lexington, Kentucky. 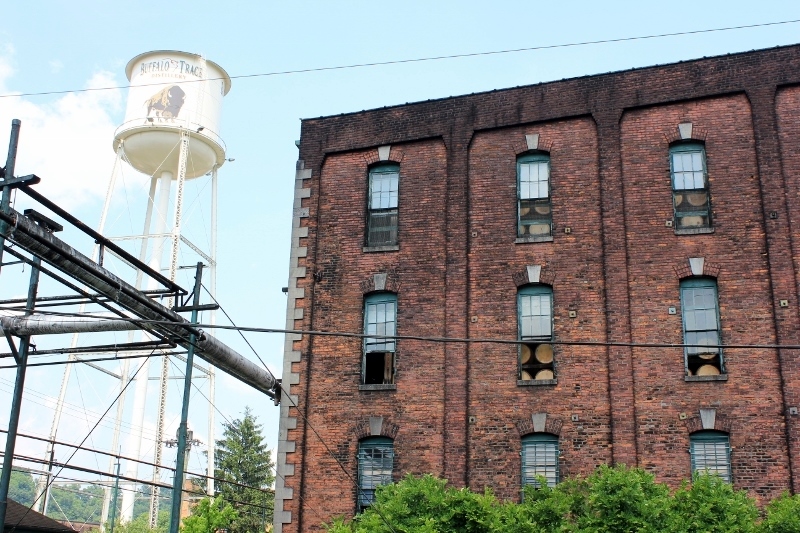 Even upon arrival, it was hard not to be impressed with Buffalo Trace. The grounds were impeccably manicured, large multi-story brick buildings showcased bourbon barrels though the open windows and a tall tower boasting their logo stood in the backdrop.

This is the oldest continuously operating distillery, open even during prohibition. Though at that time, it required a doctor’s note to get your “medicine”. A pint bottle of whiskey every ten days could be prescribed for whatever ailment you may have had.

There were a lot of sick people during prohibition. Wink, wink.

With 135 acres and 12 warehouses they are definitely producing some high quantities of bourbon and whiskey. The largest warehouse alone holds 53,000 barrels, each weighing 550 pounds. We may have died and gone to bourbon heaven. That is, if you like bourbon. Which I admittedly do not. 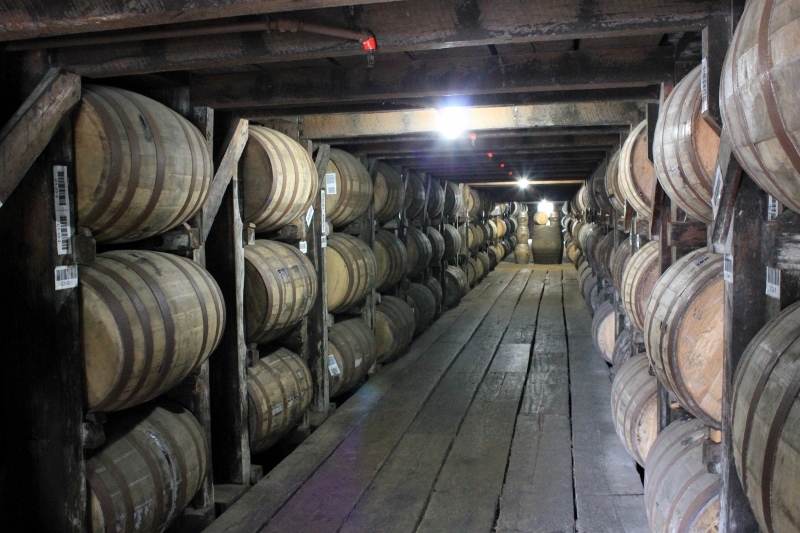 But, I can appreciate the technique, process and passion that goes into every glass. Besides, we all know that what I do like is a unique new experience and I am willing to take a few shots of bourbon in order to do that. I know, the sacrifices that I have to make.

We took a tram ride through the distillery, from one brick warehouse building to the next, learning how this liquor was made from concept to barrel to bottling to drinking.

We toured the interior of one of the storage cellars which had 18″ thick brick walls to allow for a controlled temperature inside. It was quite chilly in there with the only air-conditioning being the fat walls and dirt floor. This is where they age the alcohol before transfering it into the bottle.

The bottling room was small, but efficient, bustling with about a dozen employees, each with a designated task on the production line; inserting cork stoppers, removing wax drippings, applying labels, etc. Ever since seeing a crayon factory feature on Sesame Street as a child, I have been fascinated by manufacturing equipment. And this was no different. I wished I could have jumped on the line to apply labels or put hot wax around the cork. But, they certainly did not want any crooked labels or burnt fingers. 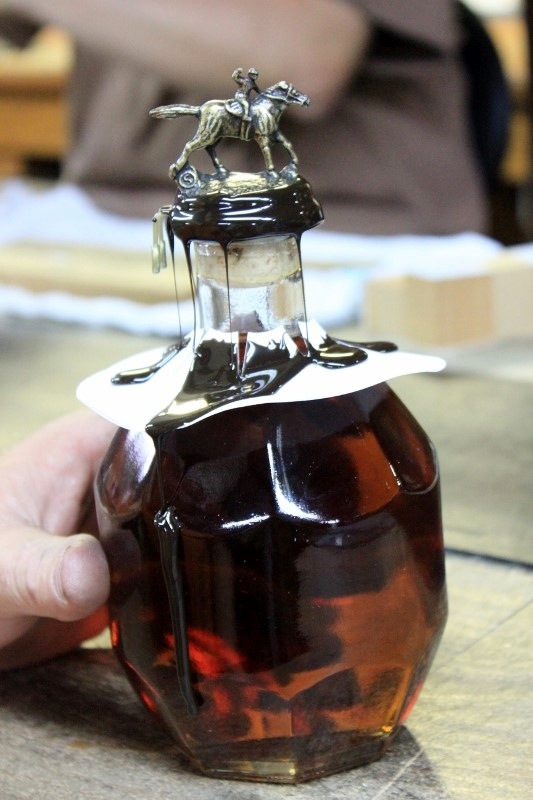 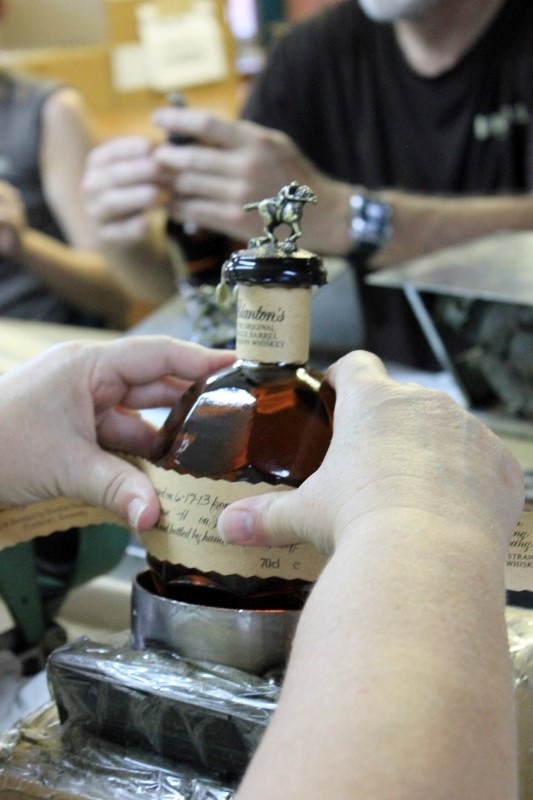 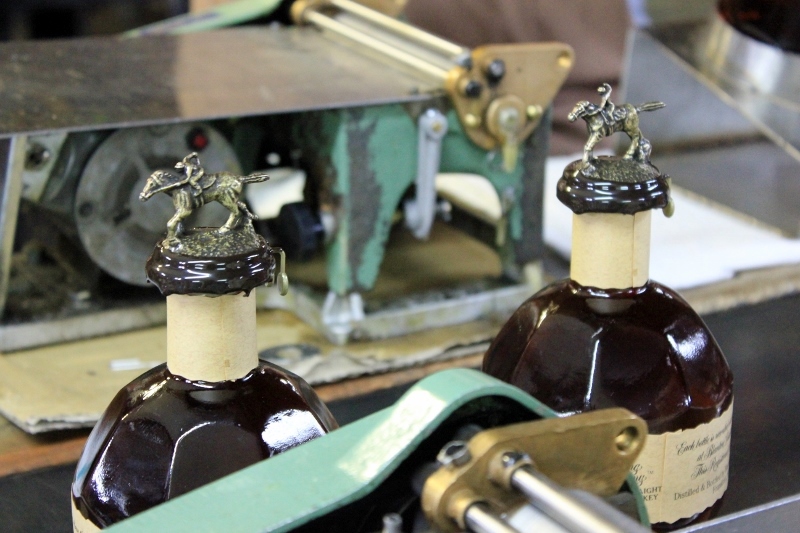 Though we did not perform any physical labor in the bottling room, we did walk away with a souvenir jockey horse stopper, minus the bourbon. I think it will fit nicely into a bottle of Syrah.

After touring the grounds we headed inside for my first ever Bourbon Tasting. Though I have done several other types of tastings in my life, there was something really unique about this one.

Our tour guide Freddie (ask for him if you go) started our tasting by pouring the White Dog, a colorless whiskey, into our cupped hands. Where was this going? He then had us slap our hands together a few times and smell them. They smelled like potent whiskey. We then waved them in the air for another thirty seconds, which made them fragrant like corn. One more round of waving and the aroma was that of baking bread. After another minute, our hands felt soft with no smell. Fascinating. Really.

We went on to sample three liquors; White Dog, chilled Eagle Rare and Kentucky Straight Bourbon Whiskey. The tasting technique we used was to take small sip of water, swallow and then a sip of bourbon. The second sip was done by swirling water in your mouth, adding a sip of Bourbon and chew it like wine. The Bourbon went down a bit smoother than the whiskey. 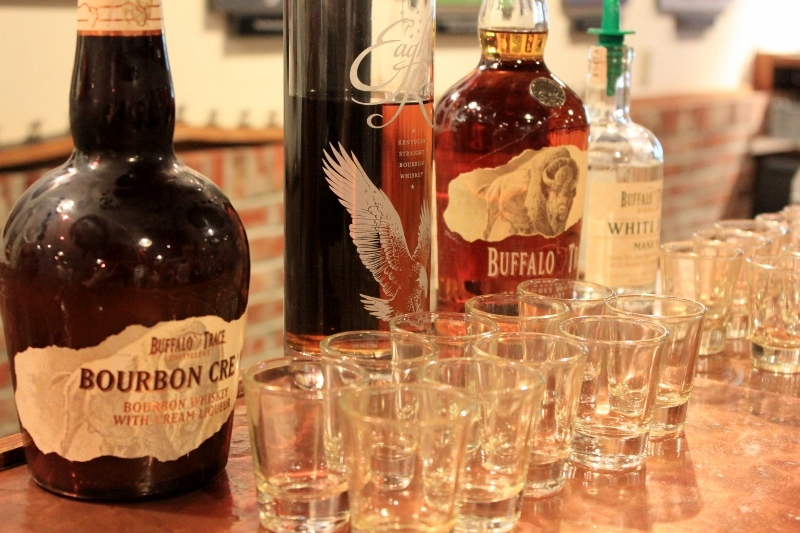 The last thing we tasted was Bourbon Whiskey Cream, a dessert liquor. And let me tell you, there ain’t nothing wrong with bourbon cream, even for my wine loving self.  If you like Baileys, you will love this. After drinking half, we added the Buffalo Trace housemade rootbeer to our glass. Plop in a scoop of ice cream and it could have been a complete dessert. It gets even better when accompanied by Kentucky Bourbon Chocolates. Maybe I could get used to drinking Bourbon after all.