Be a Dogsledding Musher in Bigfork Montana

The snow started to drop as soon as we pulled up to Base Camp in Bigfork, not uncommon for this time of year in the Glacier Country of Montana. The current weather didn’t matter much, as long as the ground was covered in a blanket of white we would be able to spend the afternoon dogsledding. It was only a few months ago that I had been dog sledding in Norway while traveling with Hurtigruten cruises, a night time excursion to chase the Northern lights.

I was going to be a dog musher. 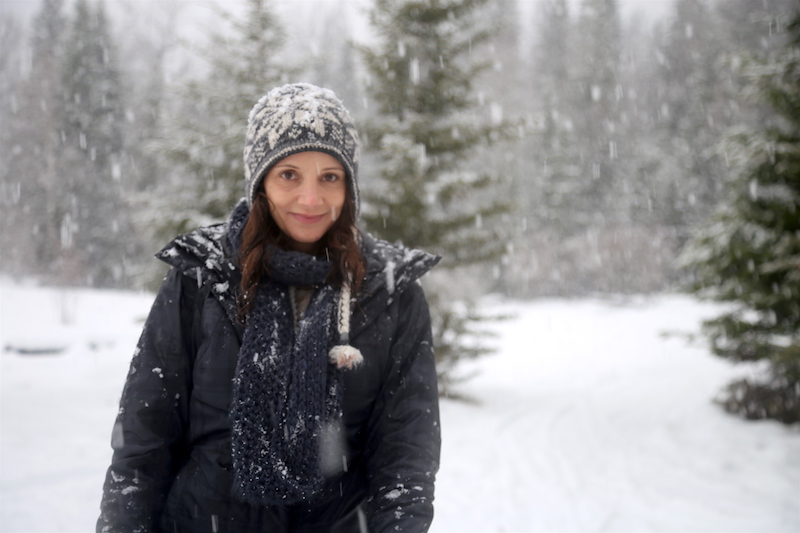 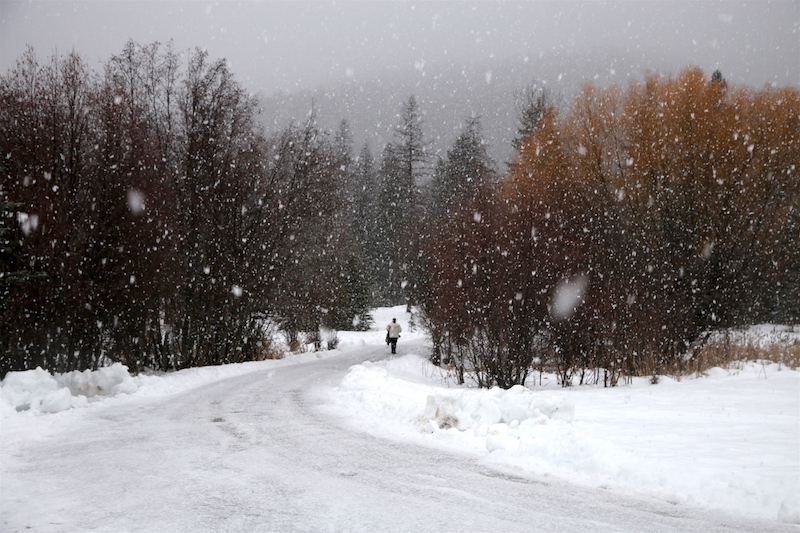 We walked towards the dog cages, that were home to eighteen adults and 3 pups.

Sus, Somer and Suka all stood at attention.

The dogs here are not typical dogsledding Siberian husky, they are Intuits, a rare breed with with an ancient connection to the Intuit people and explorers of the Arctic. They were bred to resemble a domestic wolf, and live to pull. 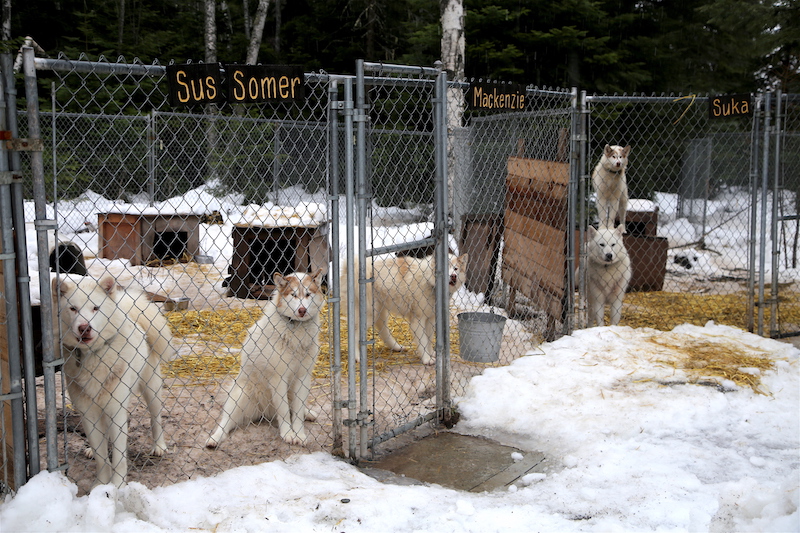 One by one the dogs where let out their pens, starting with the puppies (my absolute favorite animal on Earth). Each ran around inspecting every inch of the foreigners who stood before them.

They were just as curious of us as we were of them.

After they had settled down, we began by learning to harness the adult dogs. It seemed like a simple process by just straddling the dog, putting the harness over his head and pulling his paws through the holes. Our guide made it look easy, completing the operation in less than a minute. Then it was my turn. They must have given me the extra squirmy dog, because I couldn’t get his legs through the harness no matter how hard I tried. It required expert assistance.

Even at this early stage, it was beginning to be easy to see the different personalities of the pooches. Cowboy was rowdy, Enzo was the grumpy old man and Mackenzie was the sweet one in the rear. 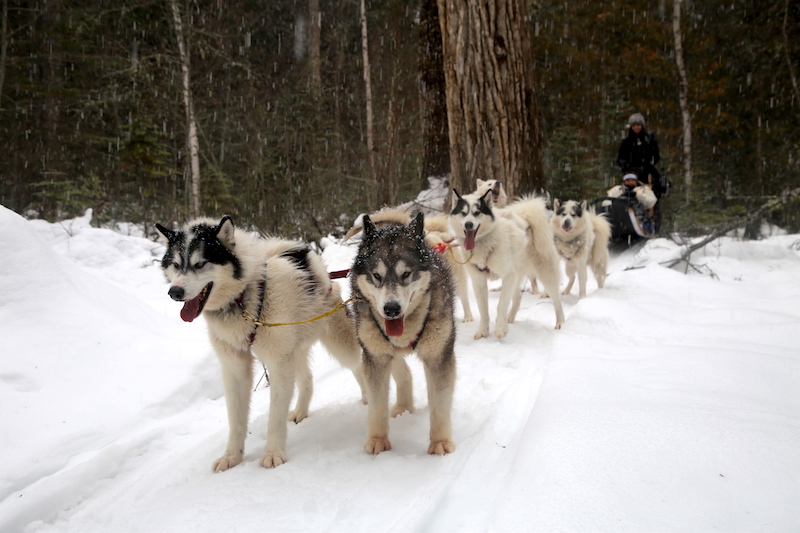 With the dogs harnessed and hooked to the sled, we got a basic mushing lesson. The main points where to use the words “hup” to go and “whoa” to stop, most importantly keep your foot on the brake until you are ready to ride. They asked who wanted to be the musher first and I raised both hands.

Each sled had a driver and a passenger, the passenger in this case was my friend Cacinda from Points and Travel. She volunteered, even after bearing my less than stellar driving skills in the South of France. She’s a brave soul. 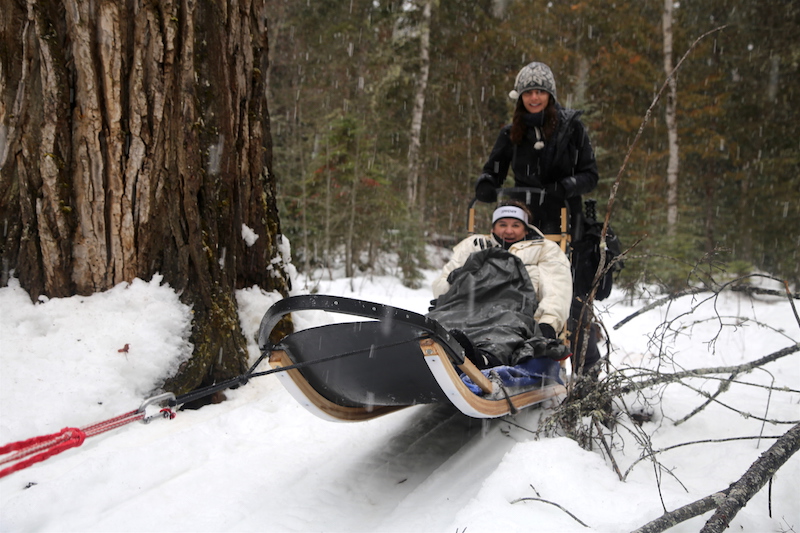 We were in position, with the guide next to us on skis, and I let my foot off the break and yelled “Hup”. The dogs started to run, and the sled sailed along with them. We headed through the snow-filled forest at a rapid rate of speed.

It was the best roller coaster. Ever.

We sped through turns and bumps, while our guide held on next to us skiing along the side of the trail. As we were speeding through, a small creek had to be maneuvered. There was no clear, well worn path. The dogs kept up their pace, able to manipulate themselves easily. The sled was a different story. It slid to the left, climbing up a bank on its side, and immediately tipped over leaving me thrown to the ground.

Luckily, the snow was good padding.

After inspecting myself for injuries, I got right back on and continued the wild ride. I’m no quitter. 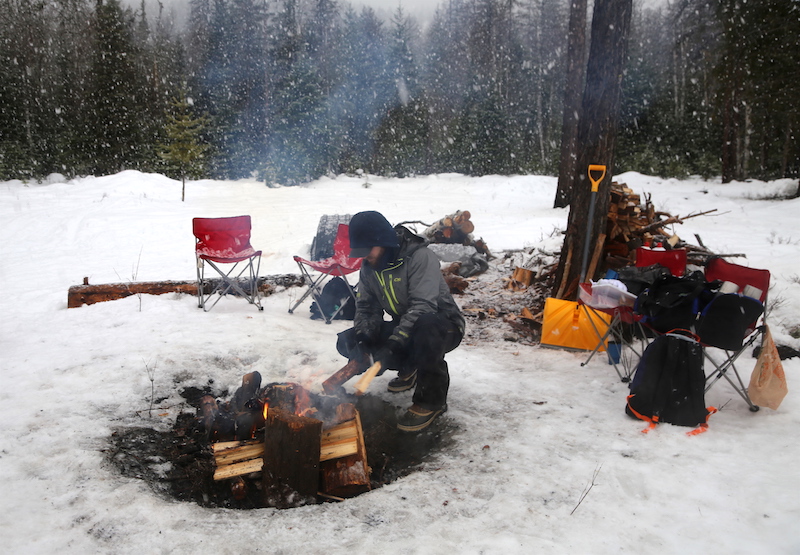 We took a break at a wood fire that was built for us in the middle of the vast land. Here we made s’mores and drank hot cocoa, giving the dogs a much deserved rest.

Beyond the fire, there was a few sets of cross country skis for that taking. Since I never had down it before, and it’s on my bucket list, I strapped on a set and made my way through the trees.

The ride was a bit slower than the dogsled. 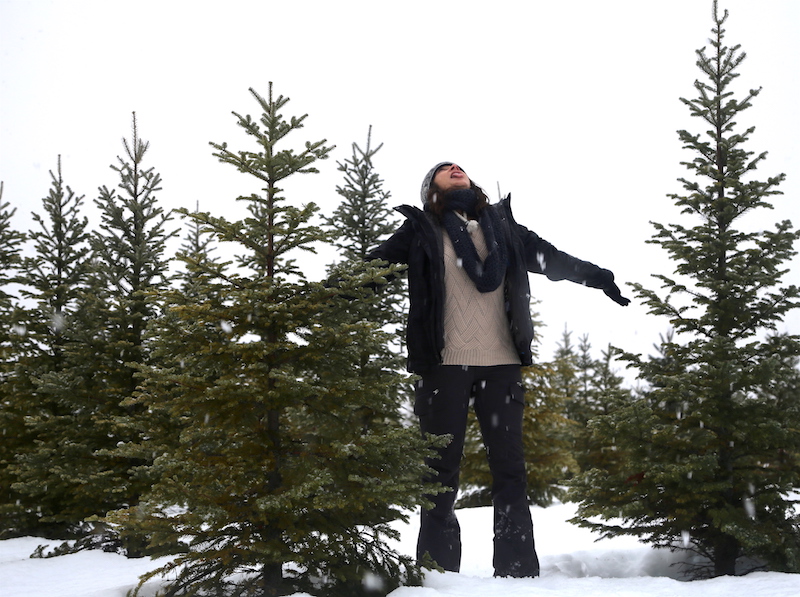 I ended up at a Christmas tree farm, where the pint size pines looked like they wouldn’t be ready for another year. I had played with puppies, been the dogsledding musher, eaten s’mores, learned to cross country ski, traipsed through a Christmas tree farm and now I was catching snowflakes on my tongue. It turned out to be a great addition to my list of the top things to do before you die.

One of the best days ever.