Meet An Italian Star at the Mirage VIP Pool

You never know who you will meet in Vegas. Once, I spent an evening dancing in the private booth of Rob Dyrdek’s, the star of Fantasy Factory. The next visit Adam Sandler and Kevin James were shopping in Rolex. And now an Italian star.

On my last day in Las Vegas my girlfriend and I had six hours to kill before our flight and couldn’t think of a better way than lounging by the pool and drinking $20 Mojitos. At that price, I  would probably be dropping the ‘s’ on Mojitos.

Though the Mirage sports an amazing guest pool with a waterfall, we were looking for something more private and peaceful. We checked out Bare Pool, you can go topless there. Nope. Not going to happen. When I will be sunbathing topless it will be in a country where that is the norm, not in Sin City. The VIP pool was the only other option. It featured shaded lounge chairs, a private cocktail waitress and random free snacks for fifty bucks per person. 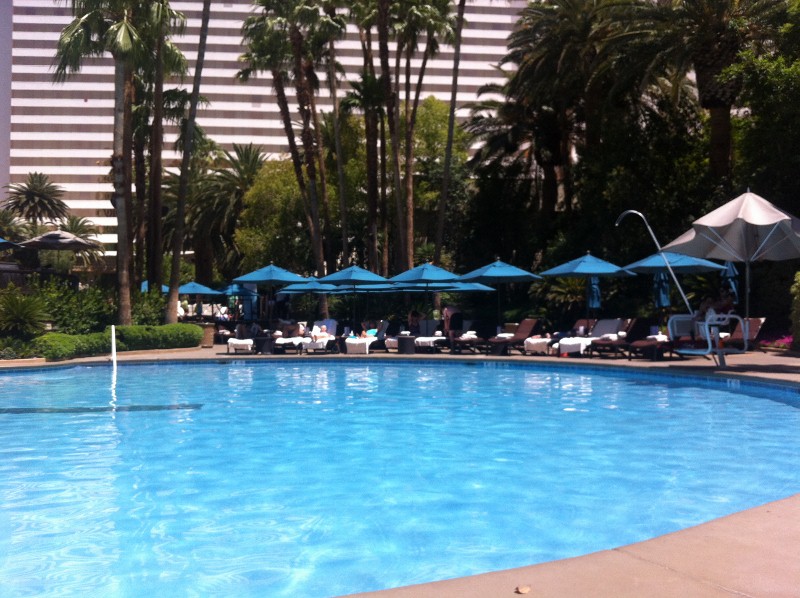 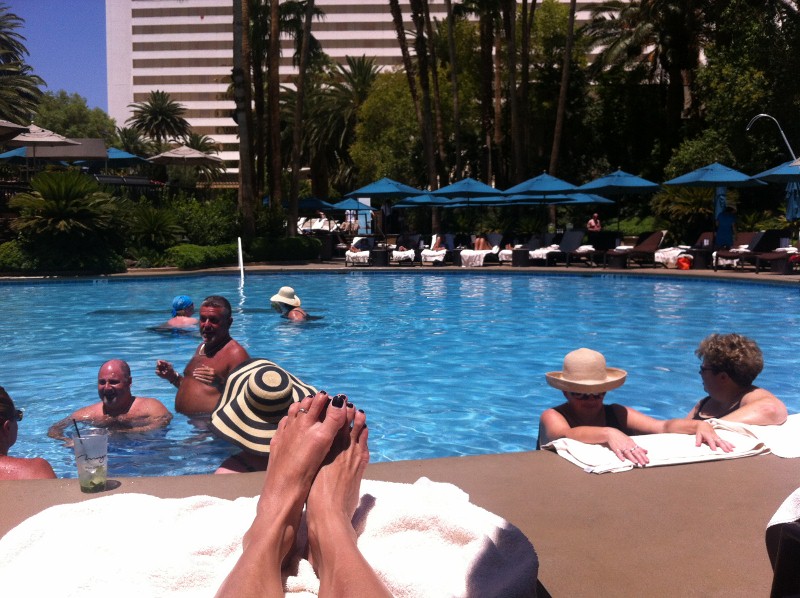 I settled into my pool lounging marathon with a fully charged IPad and a celebrity gossip magazine. I ordered a large skinny Margarita, no simple syrup, for twenty bucks and spent the next twenty minutes trying to come up with ways to nurse it for my entire stay.
Diluting my skinny Mojito with the free cucumber water was the solution. Brilliant.
As I was reading about how Jennifer Aniston was vacationing someplace beachy…again, I peered up at the private cabanas. At $400 a day, I couldn’t help but wonder who might be up there. Jen? Are you in there? Just then two men and one woman emerged, making their way to the pool. Who are you? CEO’s of a large conglomerate? Soap Opera stars? Or simply high rollers who got comped? 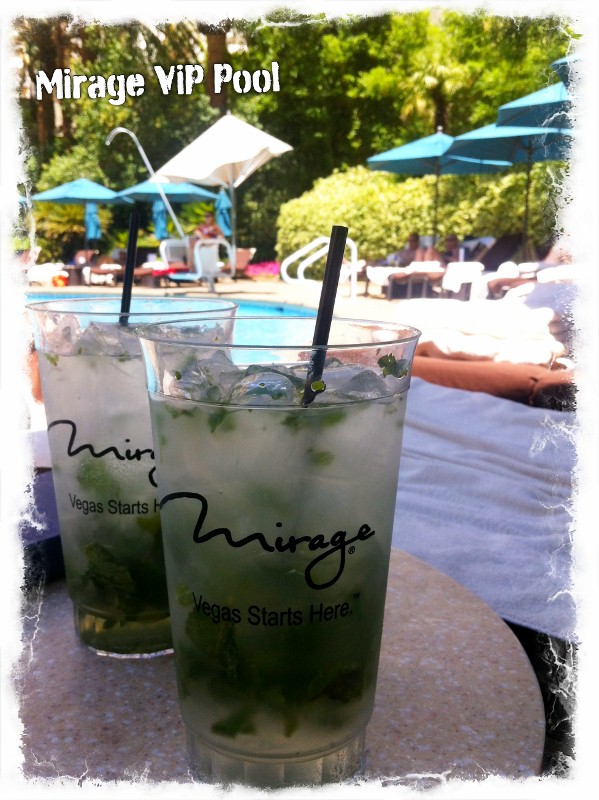 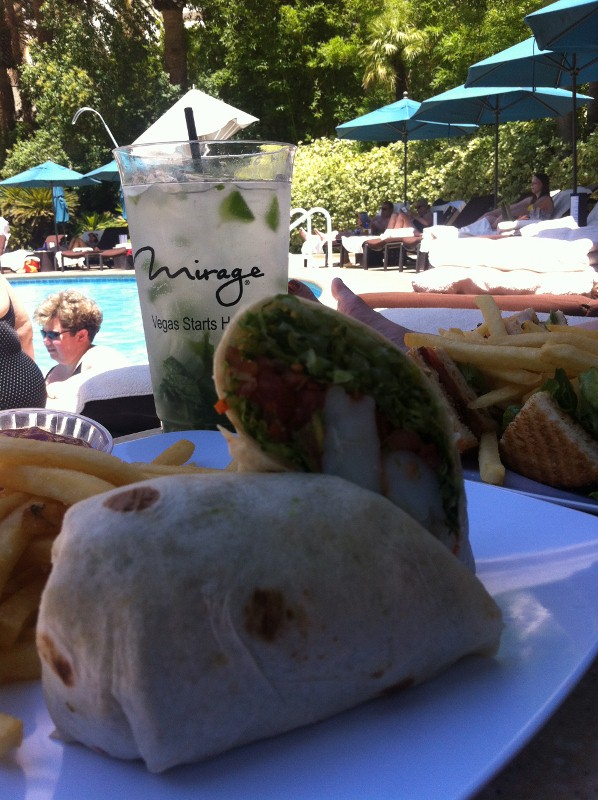 “You can’t beat this.” one of the uber-wealthy-high-rolling-conglomerate-CEO said. And that was all that was needed to start a cordial conversation about the weather, Las Vegas and what we were each doing there.
There was a story about being a well-known singer from Italy, coming to Vegas to meet with Celine Dion, having dinner with Marie Osmond, appearing on Jimmy Fallon and potentially performing at Caesars Palace. Blah. Blah. Blah. I’ll call your bluff, I’ll Google.
I held up my IPhone to Patrizio Buanne, “Well, turns out you are kind of a big deal.” was all I could say to Italian star singer and, of course, “can I get a picture?”
Patrizio is a romantic, make your knees weak, baritone singer born in Naples and raised in Vienna. I am certain he draws a crowd of panty throwing women. And he is charming. 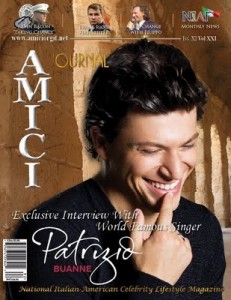 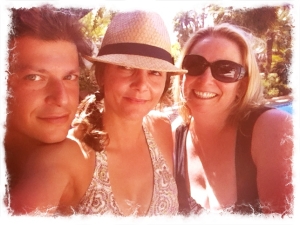 The other man was Francesco Lo Castro, a talented composer and guitarist with a mile long resume.
The spunky woman was their manager, formerly working with Larry King, and an official kick-in-the-pants. I could have spent my whole trip with her witty personality. 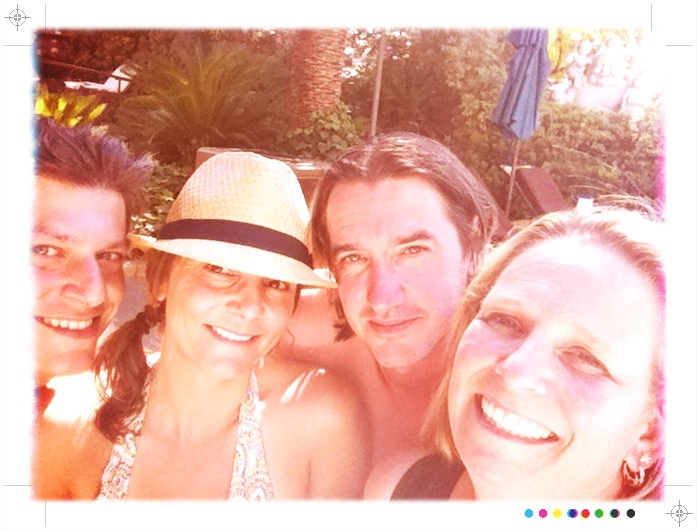 For the next few hours we invaded their cabana, ate their fruit plate and learned about the exciting, and sometimes tough, road for musicians.

When I returned home from Las Vegas, I watched this video of Patrizio performing ‘A Man Without Love’.

Mr. Buanne, I am now a fan, but will still not throw panties at the stage, unless they are someone elses.

Have you ever spent time will a star? Who would you have liked to have met at the pool?